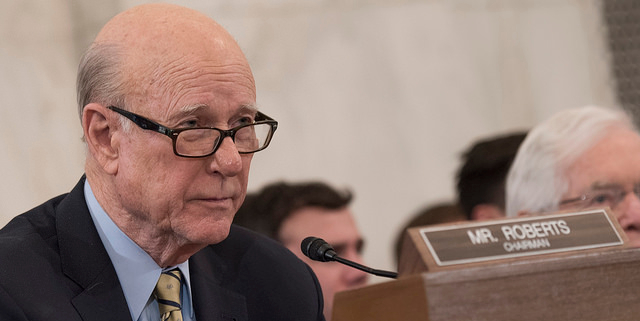 “All of us understand that going into this Farm Bill, we are facing tough and critical times. The challenges are great, but the opportunities are boundless.”

“Our farmers and ranchers grow the safest, the most reliable, and the most affordable food supply in the world. It is essential that small differences do not get in the way of the larger goal – to pass a Farm Bill.”

Chairman Roberts’ remarks as prepared for delivery are below:

This summit has been called to discuss the ongoing work of the Kansas Agricultural Growth Strategy project, which aims to develop a plan to spur growth for the agriculture industry in Kansas.

I understand that intended outcomes of this project include reducing “over-reaching, excessive, burdensome, federal regulations,” “maintaining an open-for-business environment,” and giving our state’s farmers and ranchers well-crafted federal legislation though the Farm Bill and other policy initiatives.

I agree. The agriculture sector needs a government that helps maintain the competitiveness of the commodities that are grown in state, by seeking out new and emerging markets. It needs a federal partner that helps roll back costly regulations. And, the ag sector needs a government that helps agricultural, rural, and farm and ranch businesses plan for long-term growth by providing a permanent tax code, as well as providing producers with the tools needed to manage market uncertainties.

At a time when the agricultural economy is in a period of adjustment, it is important that the role of government be a partner, not an adversary, to farmers and ranchers.

As Chairman of the Senate Committee on Agriculture, Nutrition & Forestry, my main task is to work on behalf of farmers, ranchers, and other rural stakeholders across Kansas and the rest of the country.

As I said when I first became Chairman of the Agriculture Committee, I will listen to farmers and ranchers first, and I have no plans on changing this approach as we move forward with the next farm bill.

In February, we held the first Senate farm bill field hearing, right here in Manhattan, Kansas followed by a field hearing in Michigan in May.

During these hearings, and other travels to farm country, I have listened to farmers, ranchers, and many others in rural America regarding what’s working, what’s not working, and what needs to be improved from the 2014 Farm Bill.

Since those hearings, we have also held hearings in Washington to examine individual areas of the Farm Bill as well as looked at the economic conditions that policy makers must consider. So far, we have had hearings on eight farm bill titles, and we plan to move forward with more when Congress returns to Washington in September.

From these hearings and listening sessions, one thing is clear – times are challenging right now in farm country.

When the 2014 Farm Bill was written, times were relatively good in agriculture. But, as everyone should know, a lot has changed since then.

Low commodity prices are weighing on farm sector profits for both row-crop and livestock producers. Crop receipts are expected to decline by over $42 billion and livestock receipts by over $23 billion.

On the credit front, reduced farm income over the past four years has continued to weaken credit conditions in the agricultural sector. Tight profit margins and ongoing cash flow shortages are increasing the demand for loans and creating decline in repayment rates.

The trend in farm country is clear. But, during these tough times in the agricultural economy, what’s needed is certainty, bold thinking, and new ideas that address today’s and tomorrow’s challenges.

During visits, producers from across Kansas, Michigan, Montana, Alabama and nearly everywhere in between have emphasized the importance of crop insurance and other risk management tools as they navigate through a struggling farm economy.

In 2015, I worked overtime to reinstate a $3 billion cut to crop insurance during the budget process.

However, the work is not done. As we move forward with the Farm Bill, there will be outside groups and members of Congress looking to gut the crop insurance program and cut billions of dollars in the name of “reform.”

Time and time again, agriculture has been asked to do more with less. I would remind these “reform” advocates, that the last Farm Bill voluntarily cut spending.

And, the previous crop insurance contract negotiation at USDA cut $6 billion from the program on top of a $6 billion reduction in the 2008 Farm Bill.

Farmers, ranchers, and rural families understand fiscal responsibility. But, now is not the time for additional cuts to a program that producers rely on as a risk management foundation.

Producers are not only at the mercy of the weather, but they also face challenges with burdensome regulations that affect and impact their production and the cost of doing business.

After eight years of wondering what costly government mandate would be announced next, it is nice to have an Administration that is fighting back on over-regulation.

I am glad to have a President that is taking an active role at providing regulatory relief to all sorts of burdens on farmers, ranchers, businesses, and other Americans.

At USDA, Secretary Perdue has certainly hit the ground running. He has demonstrated a strong understanding of the issues facing agriculture and rural America. I am confident he will continue to put the entire agriculture value chain—producers, input suppliers, food manufacturers, consumers—and the communities in which they live, first.

I look forward to continuing to work closely with the President, Secretary Perdue, and others in the Administration to take a common sense approach to regulation that benefits rural America.

Finally, we need to strengthen our export markets for not only the things that we make, but also for the commodities that we grow.

The Secretary has moved rapidly to elevate the importance of trade. He is moving forward with the creation of the Trade Under Secretary position, which was directed in the last Farm Bill but unfortunately not implemented under the previous Administration.

At a time when the agriculture economy is in a rough patch, farmers and ranchers more than ever depend on trade that will increase demand for their commodities.

USDA estimates that each $1 of U.S. farm exports produces an additional $1.27 in economic activity, and every billion dollars in agricultural sales overseas supports about 8,000 American jobs. It’s clear that agricultural trade not only benefits the agricultural economy, but it also benefits the entire U.S. economy.

We must continue to focus on expanding market access through negotiated agreements, starting with countries, including Japan, and enforcement of existing trade agreements and laws.

I was encouraged on the long overdue agreement made with China to allow U.S. beef access to nearly 1.4 billion Chinese customers.

The importance of trade to the agricultural economy cannot be emphasized enough. We need a strong trade policy, and I am ready to work with the Administration to make sure that our producers and businesses have a level playing field to compete in the global market.

All of us understand that going into this Farm Bill, we are facing tough and critical times. The challenges are great, but the opportunities are boundless.

Our farmers and ranchers grow the safest, the most reliable, and the most affordable food supply in the world.  It is essential that small differences do not get in the way of the larger goal – and that’s to pass a Farm Bill.

But, at the same time, our government is spending money it doesn’t have. Our national debt is approaching $20 trillion.

We are going to have to be judicious with scarce resources. We must ensure programs accomplish their fundamental purposes. We must ask tough questions and reexamine programs to determine their effectiveness.

Passing a Farm Bill in this environment is going to be challenging. We have our work cut out for us, but it can be done together in a bipartisan manner.

At the same time, the Agriculture Committee will continue to move nominations as quickly as possible after we receive them. Having new decision makers confirmed and in place adds certainty to our federal agencies.

It’s crucial to now have Secretary Perdue at the helm at USDA, and we need to get a team assembled over at the Department to address many ongoing issues facing our sector.

We must also continue our work to ensure that the CFTC is fully functioning. Toward that end, I am pleased to say that earlier this month the Senate unanimously confirmed Chris Giancarlo to be the new Chairman of the Commission, as well as two new Commissioners. We hope to confirm commissioners for the remaining openings, so we have a full CFTC as soon as possible.

In addition to chairing the Agriculture Committee, I serve on the Senate Finance Committee, which oversees tax reform.

Turning to tax policy, let me start by saying that we desperately need to reform our antiquated tax system and I am hopeful we will achieve this in 2017. We are using laws that were developed over 30 years ago to tax types of commerce that did not even exist at that time.

My guiding principle is that we need fundamental reform of the federal tax system. That means individual reform, corporate reform, and business reform.

Above all, that means designing a tax system that encourages economic activity – to allow markets, rather than government, to make the most efficient use of its resources.

Pro-growth tax reform is where we need to start. We also must make the tax code permanent – so that families and businesses can plan, save, and invest for the future.

We know what needs to be fixed. We have some really good ideas on how to update the system. Now, we have a President who shares our goals.

I am very hopeful we will get to the finish line this year, but it will be hard. And, that is where you come in.

As we debate these issues, do not hesitate to contact Congress with your thoughts and concerns.

And, because I sometimes am concerned about what lurks under the banner of reform, we will need your help to ensure that we are getting things right— structuring the system as far as possible to lower rates, ease tax burdens, and make our system the most competitive possible.

Overall, we have much work to do and I remain confident that farmers will persevere through these tough economic times.

Quite frankly, they have to because agriculture faces a monumental challenge of feeding a growing, troubled, and hungry world – a world which will have a population of 9 billion people in a few short decades.

And, I commit to continue working alongside our producers to implement common sense, solutions-based legislation that provides the certainty needed to make important business decisions.

Thank you, again, for the work that you all do every day. And, thank you for being a strong partner with our government.