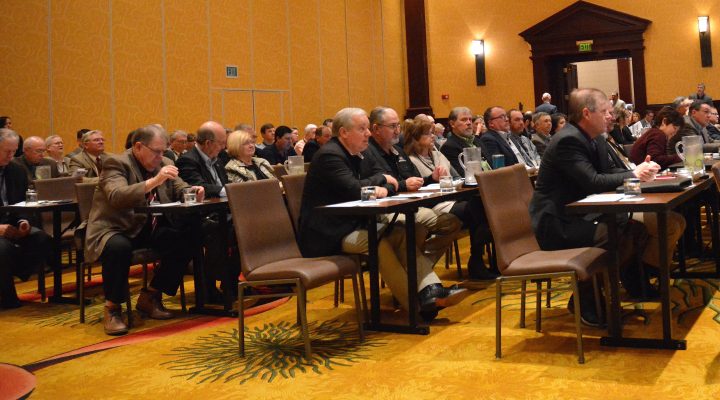 Agricultural representatives from all commodity groups were represented at the Southwest Ag Issues Summit in Fort Worth. (Texas A&M AgriLife Extension Service photo by Blair Fannin)

FORT WORTH, Texas — Doing more with less to fund the next farm bill program was a recurring theme at the recent Southwest Ag Issues Summit in Fort Worth.

Leaders from all major commodity groups throughout Texas and national representatives converged for two days of discussion leading up to what is anticipated to be a new farm bill program adopted by Congress in 2018.

“This is the first meeting of this next farm bill cycle,” said Dr. Joe Outlaw, co-director of the Agricultural and Food Policy Center at Texas A&M University and Texas A&M AgriLife Extension Service economist in College Station. “This is where all the ag community in Texas comes together and gets the same set of facts from experts across the country so they can start thinking about what they want to ask for that would be best for Texas agriculture producers. At this time, the amount of money will be less. What we are talking about is what’s the most efficient use of limited funds.”

“Policies made today will possibly impact the next three to five years of how farmers and ranchers make decisions,” said Dr. Doug Steele, AgriLife Extension director. “Reliable, trusted information on which to make these decisions will be critical to their success. AgriLife Extension is pleased to partner with many of the influential organizations and individuals who will assist in developing our national farm and ranch policies.”

As it stands, experts say not to count on any new money flowing into the next farm bill as it is under budget by several billion dollars.

“That’s a big deal,” said Outlaw, who will be part of a panel of economists discussing forecasts and outlooks for U.S. farms. “What you are trying to do with the safety net is provide last line of defense before major bankruptcies. When there’s less money available that safety net has to be a little lower, so things have to get a little worse before government help (begins).”

High input costs have eroded thin profit margins, according to economists, and three years of low commodity prices have made it tough for farmers.

“I’m looking forward to working with you over the next two years in getting a good farm bill,” Conaway said. “I’m committed to being a best friend to America’s farmers and ranchers. Agriculture has been under attack. Farmers and ranchers are hurting right now as farm incomes have been on a three-year decline.

“These are hard times in farm country right now. We need to make sure to get this new farm bill right.”

He said regulatory reform,  particularly changes in the EPA, will lead to dramatically changing the agency and repealing many different acts. Notably, Cruz mentioned WOTUS or Waters of the United States, which defines the EPA’s jurisdiction over navigable waters in the U.S. The rule has been one of contention for the nation’s farmers and ranchers and the water that is on the surface of the land they own.

Cruz also noted he will pursue tax reform, which will lead to jobs and economic growth both in Texas and nationally. Cruz, who has campaigned for a flat tax, reemphasized those intentions during the summit.

“Jobs and economic growth have been the focus of my campaign since day one,” he said. “Tax and regulatory reform are two keys.”

He is calling for a 16 percent tax on businesses, abolishing the estate tax, which would help family farms, and setting a 10 percent tax rate on families.

“If you buy a new combine, under my plan you would be able to expense all of that from day one instead of amortizing that over several years,” he said. “This would encourage you to invest capital, creating jobs.”

Cruz also discussed repealing Obamacare, which he said would help restore job growth on farms and ranches across the nation.

Summit speakers also focused on the new challenges that lie ahead for agriculture with President Donald Trump, a new administration and agenda items, including trade.

“Price outlook (for commodities) is considerably lower on into 2020,” said Dr. Parr Rosson, AgriLife Extension economist and head of the department of agricultural economics at Texas A&M. “When you look at yields it leans very strong upward. Farmers need to continue to produce higher yields to cover for low prices. A strong dollar is sending positive price signals to Brazil and Argentina. It’s important for coalition building with producers, environment and society to produce safe food at reasonable prices.”

The summit is hosted by the Southwest Council of Agribusiness and the Texas Ag Forum, a program in partnership with AgriLife Extension.