Home / National / FAO’s goal: Healthy food for all
A new user experience is coming! We'll be asking you to login to your Morning Ag Clips account March 1st to access these new features.
We can't wait to share them with you! Read more here. 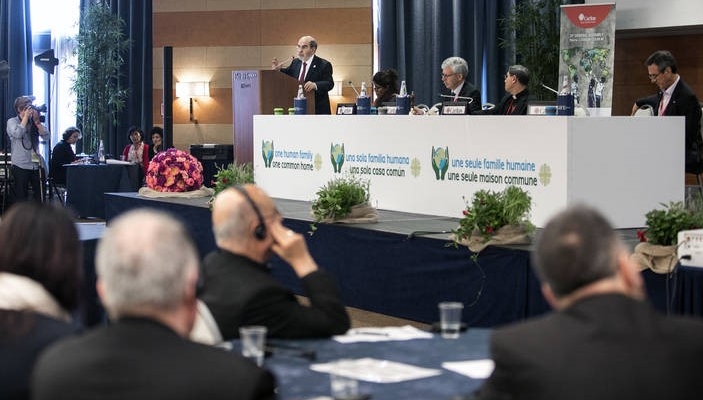 ROME — Focusing only on producing more food is not enough, it is also crucial to produce food, that is healthy and nutritious in a way that preserves the environment, FAO Director-General José Graziano da Silva said today at the Caritas Internationalis’ General Assembly in Rome. “Nourishing people must go hand in hand with nurturing the planet,” he stressed.

In his address, the FAO chief lauded “the fundamental role of the Holy See in promoting inclusiveness and sustainable development”.

“Pope Francis is the greatest reference to the values of solidarity and social justice. His encyclical “Laudato Sì” teaches us about the importance of having a greater balance between human beings and Mother Nature, in order to guarantee a sustainable future of our planet,” he said.

Graziano da Silva noted that since the adoption of the 17 Sustainable Development Goals in 2015, global hunger has only increased driven largely by conflict and the impacts of climate change.

“If we do not achieve the SDGs 1 [poverty eradication] and 2 [zero hunger], it will be impossible to fulfil the other 15 goals,” he remarked.

In order to reverse this alarming trend, FAO’s chief urged to act on three main fronts: firstly, to build the resilience of rural communities in conflict areas; secondly, to promote the adaptation of family farmers to the impacts of climate change; and finally, to mitigate economic slowdowns through social safety nets and public policies, like school-meal programmes, which are based on local food purchases from family farming.

In his remarks, Graziano da Silva also expressed his concern about the rising prevalence of obesity and the deficiency of micronutrients. “Nowadays, a more complex nutrition problem looms large: more than 2 billion people are overweight, of which 670 million people are obese,” he said.

He warned that the number of obese people in the world would very soon overtake the number of people suffering from hunger, which accounted for 821 million in 2017 – this has already happened in Latin America and the Caribbean since 2015.

The FAO chief noted that while hunger is circumscribed to specific areas, particularly in conflict zones and areas affected by climate change, obesity is everywhere. “We are witnessing the globalization of obesity: eight of the 20 countries in the world with the fastest rising rates of adult obesity are in Africa, for example,” he said.

Graziano da Silva stressed that obesity is associated with many chronic diseases, such as diabetes, heart disease, hypertension and some forms of cancer and costs about $2 trillion per year in direct healthcare and lost productivity. “This is equivalent to the impact of smoking or the impact of armed conflicts nowadays,” he said.

In order to improve people’s diets local farmers need to be encouraged to use their land to cultivate a variety of nutrient-rich crops, including fruits and vegetables, he stressed, and this can be done, for example, by introducing policies and legislation to ensure institutional procurement from local family farmers.

Among the major drivers of the obesity and the deficiency of micronutrients, Graziano da Silva named the high consumption of ultra-processed food. “Ultra-processed food contains little to no nutritional value, with a high content of saturated fats, refined sugars, salt and chemical additives,” he said noting that such products are usually cheaper and easier to access than fresh food, particularly for poor people in urban areas.

“We need not only to produce food, but to produce food that is healthy and nutritious in a way that preserves the environment. Healthy food for all, based on sustainable agricultural development: this is FAO’s goal,” he said.

The FAO Director-General reminded the audience that most of the food consumed in the world comes from family farmers and that their contribution goes much beyond just food production.

“It is about boosting local economies. It is about transmitting knowledge from generation to generation. It is about respecting and valuing local tradition, customs and culture. It is about improving nutrition and providing healthier diets based on fresh food, especially fruits and vegetables. It is about local territorial development. And it is about sustainability. Nothing comes closer to the sustainable development paradigm in food systems than family farming,” he said.

However, family farmers are facing multiple challenges including higher temperatures, erratic weather patterns, increased desertification and water scarcity, as well as the outbreak of pests and diseases, which need to be urgently addressed.

In this context, Graziano da Silva highlighted the importance of the upcoming UN Decade of Family Farming, which was approved by the United Nations General Assembly last year, and is aimed at strengthening support to the vulnerable rural communities in the world. “Family farmers need our assistance, but we also need family farmers to achieve the sustainable future we all want,” he said.

FAO and Caritas Internationalis, a confederation of Catholic relief, development and social service organisations, have a long lasting history of collaboration on themes of mutual interest related to the fight against hunger and poverty worldwide.