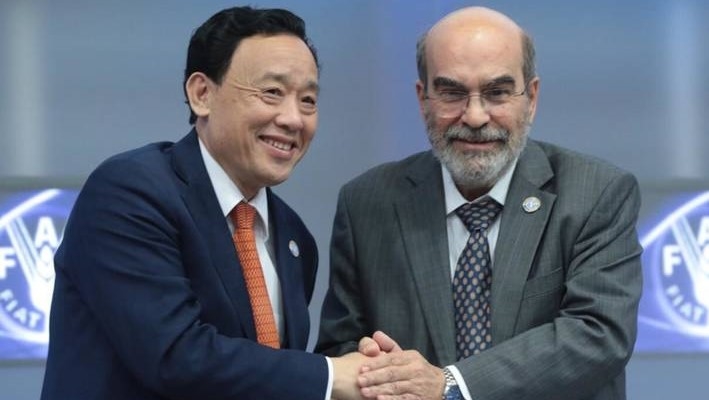 ROME — Social protection programmes and public policies are fundamental to reducing hunger, and the quality of our food – both produced and consumed – must be improved, FAO’s Director-General José Graziano da Silva said today at a handover ceremony marking his last day at the UN agency’s helm.

Graziano da Silva stressed FAO’s role, particularly in the field, in making a difference and improving the “lives of vulnerable people” by providing technical capacity, especially to developing countries, while also pointing to the standard-setting and normative work that the agency, which has 194 member states, produces.

“I have no doubt that Dr. Qu has a lot to offer to FAO in terms of knowledge and his experience,” he said.

Qu Dongyu thanked Graziano da Silva for “the smooth transition process”, which he described as “a new culture for FAO”. He also expressed “deep respect” for Graziano da Silva’s work at FAO.

Looking ahead, Qu Dongyu said: “I intend to work for an FAO that applies modern science and technology, and adopts innovative approaches.”

“My goal is to make this organization more dynamic, transparent and inclusive in the coming four years,” he added.

Qu Dongyu was elected the UN agency’s Director-General on 23 June 2019. He will be FAO’s ninth Director-General since the Organization was founded on October 16, 1945. Read his full CV here (page 15).