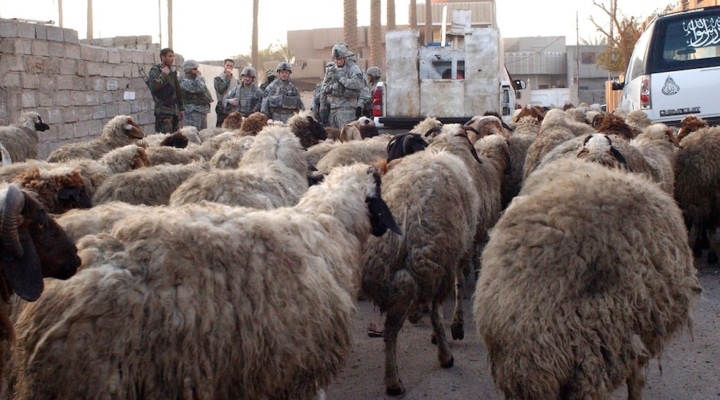 FAO is concerned that these livestock are likely to carry highly contagious epidemic diseases that can spread rapidly across national and international borders to other herds and people, leading to serious socio-economic and public health consequences. (The U.S. Army, Flickr/Creative Commons)

BAGHDAD — FAO has launched an emergency animal health campaign across Iraq’s Mosul area, which was recently retaken from the Islamic State of Iraq and the Levant (ISIL).

The campaign aims to protect and enhance the assets of 210 000 people who rely on rearing livestock for food and income in the Ninewa Governorate – of which Mosul is the capital. It includes vaccinating almost 1 million sheep, goats, cattle and buffalo and providing 1 500 tonnes of high-nutrient feed for 60 000 animals.

The campaign is being implemented in partnership with Iraq’s Ministry of Agriculture, with funding from the Iraq Humanitarian Fund.

Ninewa has been profoundly affected by conflict since ISIL took control of central and north-western Iraq in 2014. More than one million people remain displaced, the majority staying within the governorate’s boundaries in host communities or camps. Many families fled their homes with their livestock, most of which have not been vaccinated since ISIL took over the area.

FAO is concerned that these livestock are likely to carry highly contagious epidemic diseases that can spread rapidly across national and international borders to other herds and people, leading to serious socio-economic and public health consequences.

“If immediate measures are not taken, the effects on livestock production and food security could be devastating,” said Fadel El-Zubi, FAO Representative in Iraq. “Through this animal health campaign, FAO aims to contain and prevent disease outbreaks in Ninewa and across Iraq, and stop these diseases spreading to other countries in the region.”

The FAO-led initiative is the first comprehensive animal health campaign in the Mosul area since ISIL’s arrival in 2014. Throughout the governorate, the remaining parts of which were retaken from ISIL in August this year,FAO plans to vaccinate the animals against six diseases: sheep and goat pox, brucellosis, enterotoxaemia, blackleg disease, lumpy skin disease, and foot-and-mouth disease.

FAO is strengthening the capacity of Ministry of Agriculture staff, FAO’s implementing partners, veterinarians and community animal health workers, as well as increasing awareness among livestock owners and community members to protect animals against highly contagious or transmissible diseases that have the potential to rapidly spread, including across borders.

“Healthy, productive livestock means income, food and financial security for farmers and their families,” said El-Zubi. “FAO is committed to ensuring livelihoods are protected, to promote people’s self-reliance and dignity, and reduce dependence on food assistance.”

Years of conflict in Iraq have destroyed or damaged harvests, equipment, supplies, livestock, seeds, crops and stored food; and left 3.2 million Iraqis food insecure. It is estimated that in 2017, 2.7 million people may require some form of humanitarian assistance in Ninewa alone. Around 12 million Iraqis reside in rural areas and depend on agriculture for their livelihoods. Cattle, goats and sheep are raised for meat, wool, milk and skin production. After crop production, livestock is the second largest subsector providing agricultural income.

As the Government of Iraq retakes control of more areas, a major effort is needed to rehabilitate critical infrastructure so that agricultural production can resume and livelihoods can be restored. FAO is seeking urgent funding of $74.5 million to assist 1.39 million people in 2017, through returns packages (multi-purpose cash, agricultural inputs and cash for work), rehabilitating damaged agricultural infrastructure, vaccinating and feeding livestock, and expanding cash-for-work and other income-generating activities. FAO’s work, in coordination with the Iraqi government, supports families returning to retaken areas, internally displaced families, host communities and refugees from Syria.