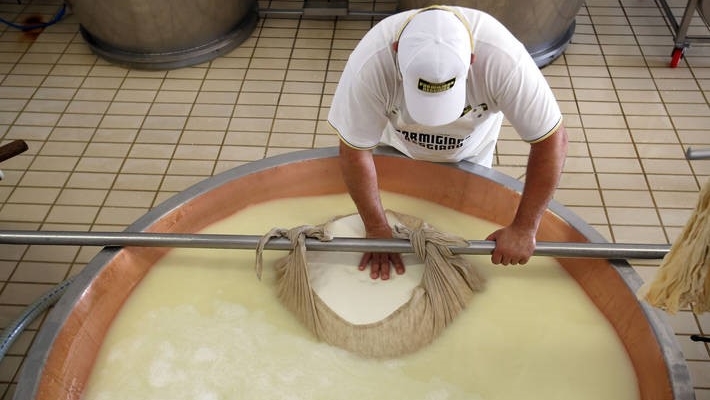 Working the curd at a parmesan cheese factory in Italy. (FAO)

The FAO Food Price Index averaged 168.8 points, 3.7 percent below their June level, the biggest monthly drop since late last year. The index had been steadily rising in 2018 until June.

The FAO Food Price Index is a measure of the monthly change in international prices of a basket of commodities.

The FAO Dairy Price Index led the slide, declining 6.6 percent, with butter and cheese quotations dropping faster than those for whole and skim milk powders.

The FAO Cereal Price Index declined 3.6 percent from June and is now below its year-ago level. Export quotations for wheat, maize and rice all declined, although wheat and maize values edged higher towards the end of July.

The FAO Vegetable Oil Price Index was 2.9 percent lower, its sixth consecutive monthly decline, and is now at its lowest level since January 2016. Part of the July slide was driven by spill-over weakness from the soybean market, which is affected by the trade dispute between China and the United States of America. Rapeseed oil values trended upwards, however, buoyed by improved demand from biodiesel producers and negative crop prospects in the European Union.

The FAO Meat Price Index declined 1.9 percent from its June value, which was revised up in the wake of higher beef export prices from Brazil due to a truck drivers’ strike.