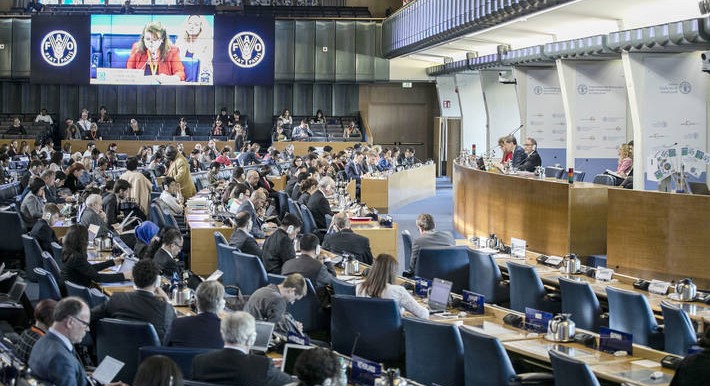 ROME — The Committee on World Food Security (CFS) wrapped up its 45th Session today, tasking itself with formulating Voluntary Guidelines for Food Systems and Nutrition for approval in 2020.

The guidelines are intended to be a reference document providing guidance to governments and other stakeholders on appropriate policies, investments and institutional arrangements needed to assure everyone has “available, affordable, acceptable and safe” diets in line with their beliefs and cultures.

CFS offers an inclusive platform that includes civil society and the private sector as well as governments an opportunity to voice views and develop policy recommendations and guidance on topics affecting food security and nutrition. Past outputs include landmark guidelines on land tenure and responsible investments in agriculture.

“Because of its inclusiveness, CFS is a powerful engine for combining political will and relevant knowledge towards zero hunger,” said Mario Arvelo, CFS Chair and Permanent Representative of the Dominican Republic to the United Nations’ Rome-based food and agriculture agencies. “Building on the success of this session, we are all expected to renew our commitment as the range of participants expands to all potential partners, because eradicating hunger and all forms of malnutrition by 2030 can only be possible if everyone is on board.”

Earlier this week, FAO Director-General José Graziano da Silva urged CFS to “step up” with strong guidance, emphasizing that “overweight and obesity must be a subject of public policies, not a private issue.”

Malnutrition has many forms – including micronutrient deficiencies – and affects one in three people today, a figure that may rise to one in two by 2030 if nothing is done.

Evidence increasingly suggests that economic growth alone will not fix the problem – which impacts rich and poor countries and households alike – and that new policies are needed.

Increasing international concern led to FAO’s hosting of a conference that led to the 2014 Rome Declaration on Nutrition and the UN decision to declare a Decade of Action on Nutrition (2016-2025).

The CFS guidelines will seek to help governments “operationalize” the recommendations agreed at those fora.

They expressly aim to “address the key causes of vulnerability to all forms of malnutrition in different types of food systems in both rural and urban areas, with special attention to the poorest and most nutritionally vulnerable people.

While global in scope, they aim to offer actionable advice for all the world’s food systems, which include traditional systems where processed foods are rare to advanced ones where they can crowd out healthier alternatives. They will address areas ranging from supply chains to consumer behavior, and recommend ways to boost nutrition literacy and implement effective food-packaging labels.

The week-long CFS 45 hosted more than 50 side events where debates were held on many subjects ranging from urbanization, to climate change, tenure and livestock and a major new publication on World Livestockwas launched.

A global thematic event, opened by Mr. Arvelo, was held to review on-the-ground experiences related to the Voluntary Guidelines to Support the Progressive Realization of the Right to Adequate Food in the Context of National Food Security, which marked the first attempt by UN Member States to commit to integrating human rights into food and agriculture issues.

EU to settle WTO dispute with the US

Support is available for food systems leaders
May 12, 2020