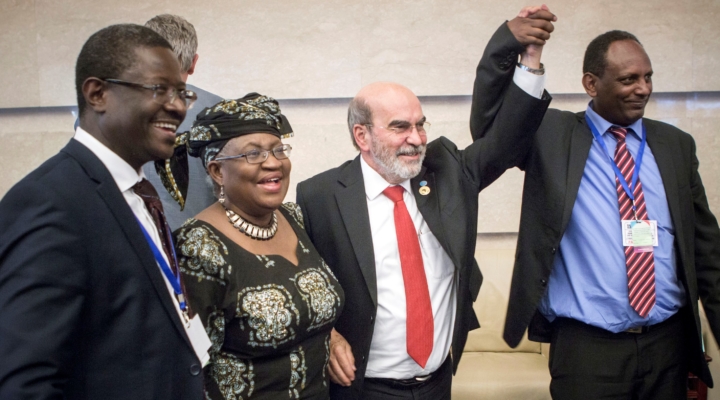 ROME — Hunger-fighting initiatives in Africa need to be deepened and broadened to put the continent back on track to eliminating the scourge of undernutrition, FAO Director-General José Graziano da Silva today told heads of state and government gathered here for the African Union (AU) summit.

“Achieving zero hunger in our lifetime is still possible,” Graziano said. “(It) will require a redoubling of current efforts and a push for political commitment and timely concrete actions such as never seen before.”

He spoke at a high-level event in Addis Ababa to review and renew the 2013 partnership – forged here between the AU, FAO and the Istituto Lula – to end hunger and malnutrition.

Progress towards that goal is not on track, and last year’s FAO report on the State of Food Security and Nutrition in the World reported that civil conflicts and adverse climate trends had led to an increase in the number of hungry people.

That reversal of decades of steady progress in hunger reduction was “extremely worrisome”, Graziano da Silva said, but Brazil’s decade of concerted action to lift millions of people out of poverty and hunger was proof that with conviction progress can be made quickly.

“We are facing a new promising scenario that renews our optimism,” he said, noting UN Secretary -General Antonio Guterres’ robust insistence on fostering peace, the first disbursements of the new Green Climate Fund set up to help countries most affected by climate change, and signs of an improving global economy.

“The majority of undernourished people in Africa live in countries affected by conflict. Hunger is almost twice as high in conflict-affected countries with a protracted crisis.  Stronger commitment by governments, the African Union and the United Nations is needed to promote peace, human rights and sustainable development,” Guterres said at today’s meeting.

The road to revival

At the conclusion of the meeting, attendees agreed on a joint communiqué that includes an 11-point action plan for AU Member States to renew their commitment to ending hunger in Africa by 2025. It includes investing in sustainable agriculture and social protection programmes.

Investment in agriculture development is “the single most effective way to provide opportunities for families to generate income and improve nutrition in Africa,” Graziano da Silva said.

Strengthening social protection programmes, especially in rural areas where most of the poor live and where formal social security systems are typically absent, is especially crucial, he said, emphasizing that such programmes can be linked with other productive investments to create “virtuous cycles of local development” that benefit the most vulnerable community members. Public food purchasing from family farmers is an example that has worked in many parts of the world, he noted.

The high-level meeting of 2013, organized by the AU Commission, FAO and the Lula Institute set up by former Brazilian President Luiz Inácio Lula da Silva, led to the 2014 Malabo Declaration on Accelerated Agricultural Growth and Transformation for Shared Prosperity and Improved Livelihoods. The commitment to end hunger and malnutrition by 2025 was a key component of that declaration.

Speaking via video link at today’s meeting, former President of Brazil Lula da Silva said: “Each country’s budget has to be designed placing the poor at its very core to be able to guarantee to them — as something sacred, something biblical — that to have breakfast, lunch and dinner is the most basic right that every human being on Earth must have”.

Former President Olusegun Obasanjo of Nigeria told participants, “We need to put the poor at the highest political level towards African hunger eradication”.

Other participants included the President of Guinea and the African Union, Alpha Condé, the Prime Minister of Ethiopia, Hailermariam Desalegn, and Ministers of Agriculture of Africa and leaders of civil organizations and the private sector.

The AU Commission, together with Ethiopia’s Ministry of Agriculture, organized today’s meeting with support from FAO and the UN Economic Commission for Africa.

While in Addis Ababa the Director-General  will also sign an agreement with the Government of Senegal to open a new FAO Sub-regional Office for West Africa in Dakar.

He also participated in an AU summit side-event led by former President Obasanjo and focusing on the importance of empowering rural women. Graziano da Silva outlined some successful case studies and explained how FAO helps Member States craft policies and programmes to reduce risks and burdens shouldered disproportionately by rural women and girls and to pursue gender equality by fostering improved income and livelihood opportunities.