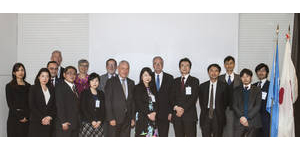 A group photo of the annual consultation meeting with the Japanese government delegation at FAO. (Courtesy Photo)

ROME — FAO today hosted a high-level delegation from Japan in a bid to bolster both sides of a strong relationship between the UN agency responsible for fighting hunger and its second-largest donor.

Japan’s Ministry of Foreign Affairs and the Ministry of Agriculture, Forestry and Fisheries sent a number of senior officials to the meeting, one of a series aimed at crafting a strategic plan for further advancing the key partnership. The broader Japanese delegation underscored the increasingly geopolitical nature of assuring food security and putting agriculture on a sustainable and responsible footing in an era of globalization and border-hopping challenges such as climate change.

Japan is a major advocate of the Sustainable Development Agenda, which targets the eradication of extreme poverty and hunger everywhere by 2030.

Along with being the No. 2 donor to FAO’s regular budget after the United States of America, Japan has been a major funder of emergency relief projects, notably in Afghanistan and in the wake of Typhoon Haiyan in the Philippines. It also by choice boosts FAO’s resources for work on the Codex Alimentarius – the world’s food safety guidelines – as well as capacity-building efforts to help developing countries assess their vulnerability to climate stress, South-South cooperation initiatives sharing Japanese rice-growing and aquaculture techniques with African nations.

Japan is also a robust sponsor of the Globally Important Agricultural Heritage Systems conservation effort and is home to eight of those designated sites.

Today’s meeting aimed at advancing coordinated approaches to key goals, including concrete actions and longer-term plans that can further strengthen the partnership and make progress towards the SDGs. Japanese officials, including those in charge of economic security, international organizations and agriculture, were briefed on FAO’s resilience-boosting programmes for emergency efforts, the ongoing effort to combat desertification in the Sahel and Horn of Africa, nutrition initiatives in Africa, various developments in the fisheries and forestry sectors, as well as on FAO’s work in linking smallholder farmers to commercial markets, its partnership strategy with the private sector, and on the guidelines for Responsible Investment in Agriculture and Food Systems.

The visitors also discussed FAO’s Strategic Framework and 2018-21 Medium Term Plan and the results-based management of the Organization’s current activities.

FAO is also keen to boost awareness in Japan of its work, objectives and achievement, as well as its attractions as an employer for youth and experts interested in its core competency areas.

In this context, FAO intends to translate more publications, notably annual benchmark editions of the State of Food and Agriculture and the State of Food Insecurity as part of an effort to deepen engagement with Japanese media as well as universities and research institutions.

From hard-hit Mariupol to backyard farming in eastern Ukraine
June 21, 2022

Amid Ukraine's war, a farmer takes comfort in her snails
June 20, 2022

EXPLAINER: How did Russia-Ukraine war trigger a food crisis?
June 18, 2022