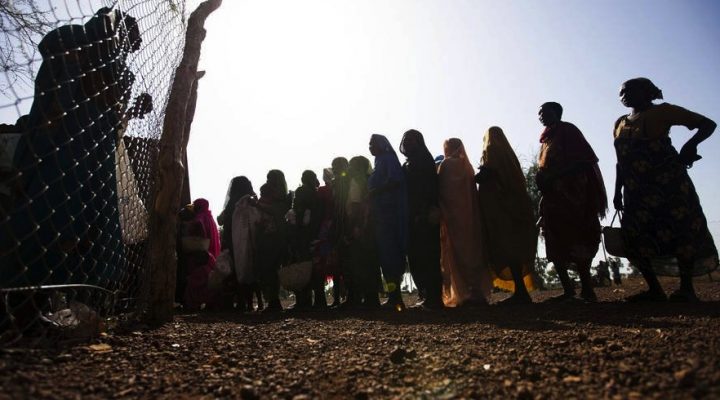 Around 5.5 million people will face worsening hunger by July if nothing is done to curb the severity and spread of the food crisis. (Courtesy Photo)

JUBA — War and a collapsing economy have left some 100,000 people facing starvation in parts of South Sudan where famine was declared today, three UN agencies warned. A further 1 million people are classified as being on the brink of famine.

The Food and Agriculture Organization of the United Nations (FAO), the United Nations Children’s Fund (UNICEF) and the World Food Programme (WFP) also warned that urgent action is needed to prevent more people from dying of hunger. If sustained and adequate assistance is delivered urgently, the hunger situation can be improved in the coming months and further suffering mitigated.

The total number of food insecure people is expected to rise to 5.5 million at the height of the lean season in July if nothing is done to curb the severity and spread of the food crisis.

According to the Integrated Food Security Phase Classification (IPC) update released today by the government, the three agencies and other humanitarian partners, 4.9 million people – more than 40 percent of South Sudan’s population – are in need of urgent food, agriculture and nutrition assistance.

Unimpeded humanitarian access to everyone facing famine, or at risk of famine, is urgently needed to reverse the escalating catastrophe, the UN agencies urged. Further spread of famine can only be prevented if humanitarian assistance is scaled up and reaches the most vulnerable.

Famine is currently affecting parts of Unity State in the northern-central part of the country. A formal famine declaration means people have already started dying of hunger. The situation is the worst hunger catastrophe since fighting erupted more than three years ago.

“Famine has become a tragic reality in parts of South Sudan and our worst fears have been realised. Many families have exhausted every means they have to survive,” said FAO Representative in South Sudan Serge Tissot. “The people are predominantly farmers and war has disrupted agriculture. They’ve lost their livestock, even their farming tools. For months there has been a total reliance on whatever plants they can find and fish they can catch.”

Malnutrition is a major public health emergency, exacerbated by the widespread fighting, displacement, poor access to health services and low coverage of sanitation facilities. The IPC report estimates that 14 of the 23 assessed counties have global acute malnutrition (GAM) at or above the emergency threshold of 15 percent, with some areas as high as 42 percent.

“More than one million children are currently estimated to be acutely malnourished across South Sudan; over a quarter of a million children are already severely malnourished. If we do not reach these children with urgent aid many of them will die,” said Jeremy Hopkins, UNICEF Representative a.i in South Sudan. “We urge all parties to allow humanitarian organizations unrestricted access to the affected populations, so we can assist the most vulnerable and prevent yet another humanitarian catastrophe.”

“This famine is man-made. WFP and the entire humanitarian community have been trying with all our might to avoid this catastrophe, mounting a humanitarian response of a scale that quite frankly would have seemed impossible three years ago. But we have also warned that there is only so much that humanitarian assistance can achieve in the absence of meaningful peace and security, both for relief workers and the crisis-affected people they serve,” said WFP Country Director Joyce Luma. “We will continue doing everything we possibly can to hold off and reverse the spread of famine.”

Across the country, three years of conflict have severely undermined crop production and rural livelihoods. The upsurge in violence since July 2016 has further devastated food production, including in previously stable areas. Soaring inflation – up to 800 percent year-on-year – and market failure have also hit areas that traditionally rely on markets to meet food needs. Urban populations are also struggling to cope with massive price rises on basic food items.

FAO, UNICEF and WFP, with other partners, have conducted massive relief operations since the conflict began, and intensified those efforts throughout 2016 to mitigate the worst effects of the humanitarian crisis. In Northern Bahr El Ghazal state, among others, the IPC assessment team found that humanitarian relief had lessened the risk of famine there.

FAO has provided emergency livelihood kits to more than 2.3 million people to help them fish or plant vegetables. FAO has also vaccinated more than 6 million livestock such as goats and sheep to prevent further loss.

WFP continues to scale up its support in South Sudan as humanitarian needs increase, and plans to provide food and nutrition assistance to 4.1 million people through the hunger season in South Sudan this year. This includes lifesaving emergency food, cash and nutrition assistance for people displaced and affected by conflict, as well as community-based recovery or resilience programs and school meals.

In 2016, WFP reached a record 4 million people in South Sudan with food assistance – including cash assistance amounting to US$13.8 million, and more than 265,000 metric tons of food and nutrition supplies. It is the largest number of people assisted by WFP in South Sudan since independence, despite problems resulting from the challenging context.

UNICEF aims to treat 207,000 children for severe acute malnutrition in 2017. Working with over 40 partners and in close collaboration with WFP, UNICEF is supporting 620 outpatient therapeutic programme sites and about 50 inpatient therapeutic sites across the country to provide children with urgently needed treatment. Through a rapid response mechanism carried out jointly with WFP, UNICEF continues to reach communities in the most remote locations. These rapid response missions treat thousands of children for malnutrition as well as provide them with immunization services, safe water and sanitation which also prevents recurring malnutrition.

Save the bees? There's an app for that