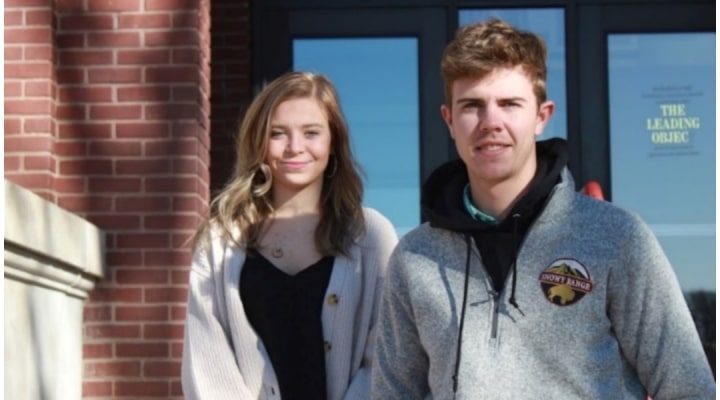 CURTIS, Neb. — Ellie Jarecke of Culbertson and William Huebner of Hershey exemplify the tradition of individuals and families engaged in Nebraska agriculture.

The two college students were 2021-22 recipients of the Sylvia Clawson English memorial for the Fred and Edna Hecht Scholarship.

Descendants of the Hecht family annually recognize NCTA students in commemoration of their family heritage in southwest Nebraska. They value higher education and students who pursue a career which benefits the state and rural communities.

While in their final year of study at NCTA, Ellie Jarecke and William Huebner received $2,500 scholarships. Each was active in student programs at the Curtis college.

The goal of Ellie Jarecke is to become an agricultural educator and teach high school students.

“I had an amazing ag teacher for two years of high school (Lauren Miller from Sumner) who taught me so much and brought out the love for agriculture education I have today,” Jarecke says.

She was raised on the family farm with a seed business and spent much of her time in the welding shop at home. Jarecke was active in FFA at McCook High School and 4-H for 12 years and was a summer intern in 2021 at the Hitchcock, Dundy, and Hayes County Nebraska Extension office.

Originally, Jarecke was majoring in business at Lincoln, but she returned to her southwest Nebraska roots to attend NCTA and work at a McCook nursing home.

“I have worked throughout my high school and college careers to be able to be the first generation of my family to get a bachelor’s degree,” she said.

Jarecke majored in agriculture education at NCTA and in August was a transfer student to the University of Nebraska-Lincoln in Agricultural Leadership, Education and Communications. After her ALEC program and student teaching, she will graduate from UNL in 2024.

Scholarships have opened doors. Eventually, Jarecke says she may obtain her master’s degree.

His family farm has served as inspiration for William Huebner of Hershey. The 2020 graduate of Hershey High School excelled in academics and athletics at HHS. At NCTA, his studies in Agriculture Production Systems had emphasis in diversified agriculture with agribusiness, crops and livestock.

At NCTA, he was a member of Student Senate, Phi Theta Kappa academic honorary, and intramural sports.

After graduating with honors in May, Huebner is back at the family operation located south of Hershey.

One benefit of attending NCTA, Huebner says, was proximity, being an hour from home. He returned weekends and during busiest seasons to assist his family.

The APS Capstone class in his final semester pulled together the many components for managing an agricultural business, he said.

Huebner received the scholarship both his freshmen and sophomore years.

The Sylvia Clawson English memorial is tribute to the 1947 alumna of the Nebraska School of Agriculture (a high school) and to the heritage of her parents Ira and Vinnie Clawson, her maternal grandparents Fred and Edna Hecht, and paternal grandparents Jake and Ida May Clawson, all farming families in the region.

Fred Hecht was a leading advocate for the State of Nebraska to select Curtis as the site of a new, residential, agricultural high school for rural residents. The school opened in fall of 1913.

Sylvia had a desire to see that her grandfather’s efforts in agriculture and education be sustained. She passed away in 2009 in California, where she and husband, Ted English had raised their family.

The Fred and Edna Hecht Scholarship fund was established through the University of Nebraska Foundation. It continues through support from descendants of the family.

Set yourself up for a successful corn silage harvest