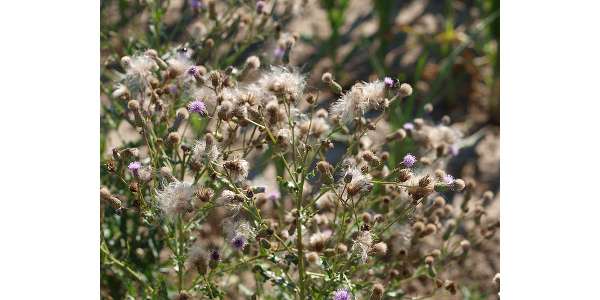 “If noxious weeds were sprayed or clipped earlier this summer and there is good weed growth, fall would be a good time to spray these weeds to get a good kill. However, if the weeds were not controlled early and now are tall, very mature and do not have a lot of regrowth, weed control this fall will not do any good,” Johnson said.

What about dried out weeds?
Where this advice is questionable area is in areas where weeds were clipped earlier, but the weed is no longer growing and regrowth is starting to dry up because of the drought conditions.

The key here, Johnson said, is to use a spray that has a residual effect so when the plant starts growing again after a rain, it will be killed then.

Spray before harvest
If conditions are right, Johnson encourages landowners and agriculture producers to spray now.

“Even though the state has not had a freeze yet, because it is fall, the perennials have started to prepare for winter by sending nutrients down to the roots to help the plant make it through the cold winter months. So now is a good time to spray for Leafy Spurge, Canada thistle, Sow Thistle, Wormwood Sage and Musk Thistle,” Johnson said.

I-29 annual call for sponsorship