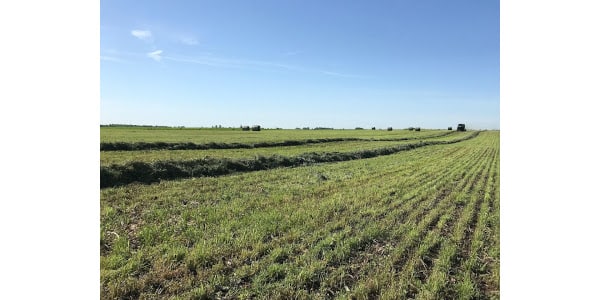 Disruption of the dormancy reaction by cutting or grazing in September to early October (depending on region), affects alfalfa winterhardiness and its survival. (Courtesy of University of Minnesota Extension)

Disruption of the dormancy reaction by cutting or grazing in September to early October (depending on region), affects alfalfa winterhardiness and its survival. Plants cut during this sensitive time stop storing energy and instead expend energy on regrowth. Crown buds that would normally overwinter and regrow in the spring begin regrowth. Unfortunately, there isn’t enough time for the herbage to regrow to allow resumption of normal dormancy reactions.

When is a safe harvest date in the fall?

For most regions of Minnesota, a final summer harvest the first week of September will allow sufficient time for alfalfa to undergo the dormancy reaction before killing temperatures. We are past this time now and in the critical fall period (7 September – 15 October) when it is risky to cut or graze alfalfa.

When final harvests are delayed until around mid-October we can minimize risk. This coincides with the date of the first alfalfa killing frosts (<25 F) in many regions. Beyond this date herbage regrowth will be minimal. Even after these first frosts we have observed that leaves near the soil surface often survive and can stay green and conduct photosynthesis into late November.

Advantages of stubble going into winter

Harvesting in mid-October does remove stubble from the field. Having more than 6 inches of stubble in alfalfa fields provides advantages to winter survival as it collects snow which can insulate the soil. Even without snow this stubble can insulate the soil from the sun’s energy that can warm the soil and expose the plant to excess cycles of thawing and freezing. Stubble can also disrupt ice sheeting and prevent smothering of plants, which all contribute to advantages in surviving the winter. Increasing the mower height to allow for more stubble is one solution. Some producers leave uncut strips within the field to help catch snow, which may help as well.

How does the summer drought affect fall harvest in 2021? The drought of 2021 has resulted in considerable variation in alfalfa growth and development within the state. Often harvests in July and August were minimal or did not occur because alfalfa plants went into drought-induced dormancy. Alfalfa is a hardy plant and now has produced lush herbage regrowth following the late August and September rainfall that was received in much of Minnesota. During September the plant is recharging its root storage carbohydrates and should have adequate reserves to survive the winter as long as this process is not disrupted by untimely harvests. A harvest around October 15th or later should be late enough to avoid stimulating regrowth and not affect alfalfa winter survival.

Planning the rotation from alfalfa to corn
September 12, 2021