Home » Fall colors off to an early start 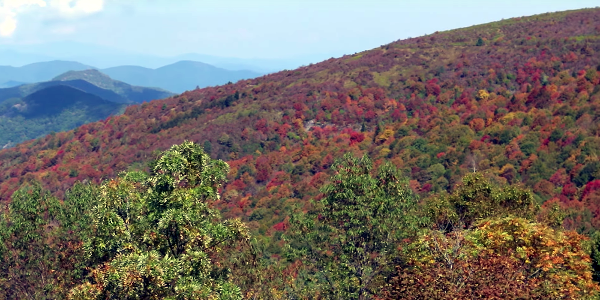 CLEMSON, S.C. — A dry 2016 coupled with a late summer cold front brought on by Tropical Storm Irma has jumpstarted fall color in the southern Appalachians.

Clemson University forest ecologist Don Hagan, in his annual fall foliage assessment, reports that the bounty of fall colors enjoyed by so many leaf lookers and businesses is seven to 10 days ahead of schedule in some areas.

Hagan took a scouting trip from Clemson up the Blue Ridge escarpment to an elevation of 5,600 feet on Sept. 18 and found colors to be surprisingly far along.

“Looking ahead in the next weeks, if we see a typical late summer seasonal transition with cold fronts and bright blue skies, color development will really begin to accelerate,” Hagan said.

In addition to keeping an eye on the weather for cold fronts and bluebird skies, flatlanders and people in the Piedmont should pay close attention to certain nearby harbinger tree species for a good indication of when it’s best to head to the high country.

“When you start to see color in species such as sourwood, black gum and flowering dogwood, you know that the fall color season has started and there will be more and more color in the weeks to come,” Hagan said.

The good news for tourists and businesses is that just because the leaves are changing sooner doesn’t necessarily mean the show will be shorter. The fall color season in the southern Appalachians generally starts in late September and winds down in early November. Since tree stress and cooler temperatures are key factors in color development, changes begin in the upper elevations and move downward at a rate of about 1,000 feet per week. Peek color in Upstate South Carolina should arrive in early November. Then the leaves will start filling gutters and blanketing lawns.

While New England and the Upper Midwest receive most of the fall foliage hype, the rich biodiversity of the southern Appalachians means that Southern leaf lookers can experience a palette of colors that can’t be found anywhere else.

For example, at elevations around 5,000 feet along the Blue Ridge Parkway, leaf lookers can experience a Northern hardwood forest like they have in New England. But it’s the 3,000-foot elevation where Southern leaf lookers can see a truly unique mix of colors.

“At 3,000 feet, you can see some of the high-altitude tree species mixed with the lower-altitude species. That elevation might not always have dramatic vistas, but it’s the sweet spot of fall color,” Hagan said.

As for the science of leaf color, deciduous trees pour a lot of resources into growing and maintaining their leaves during spring, summer and early fall. But after a time, the cost of maintaining the leaves exceeds the benefit. This is when the leaves cease producing chlorophyll. The green pigment slowly disappears, revealing the yellow and orange pigments that have been lying in wait all along.

As for reds and purples, those colors aren’t normally present in the leaves, but are produced by a chemical reaction brought on by bright sunlight.

While last year’s leaf season was dimmed when Hurricane Matthew impacted the region in early October – the moment of peak color at high elevations – Irma appears to have had less of an impact on color, Hagan said.

While the trees and their colorful leaves are the subject of news stories and keep the cash registers ringing, Hagan also urges people to take note of more subtle beauty, such as in fall wildflowers.

“Anywhere you have a nice open vista with a lot of sun you can usually find a rich palette of fall wildflowers, such as goldenrods and asters. They’re not only beautiful, but also incredibly important for pollinators, such as bees, wasps and other insects,” Hagan said.