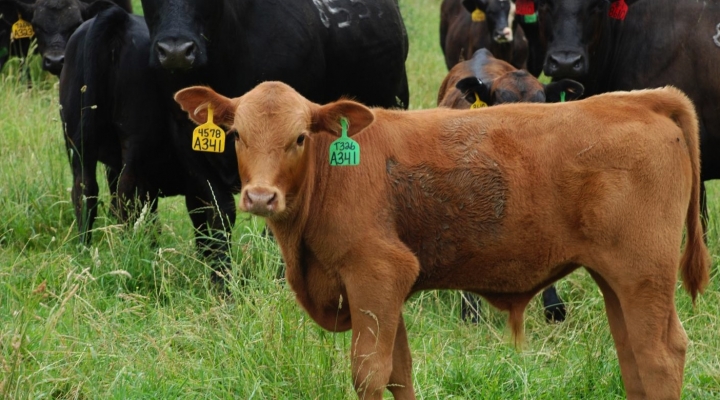 While cow-calf producers in Tennessee and the Southeast have long favored a spring calving season, new research from the University of Tennessee Institute of Agriculture indicates possible advantages of a fall calving season. (Photo by T. Johnson, courtesy UTIA)

KNOXVILLE, Tenn. — The vast majority of cow-calf producers in Tennessee and the Southeast using a defined calving season have long favored spring calving; however, researchers at the University of Tennessee Institute of Agriculture have evaluated the risk and returns for a fall calving season, proving once again that timing is everything.

Until now, information regarding profitability and risk associated with spring and fall calving seasons in the southeastern United States has been limited. Addressing this limitation, researchers assessed the potential trade-offs in risk and return of using a fall calving season rather than a spring calving season, while considering the seasonality of cattle and feed prices for least-cost feed rations.

Using simulation models based on 19 years of data, UTIA researchers determined that the fall calving season, calving between mid-September and mid-November, was most profitable and had the smallest amount of variation in profits, meaning fall calving was less risky.

This may seem counterintuitive, as spring calving produces heavier calves at weaning and feed costs are lower. The increased profitability of fall-season calving is due to the higher prices the calves can bring at weaning and an increase in calves weaned per cow.

Cattle production in the United States revolves around a production system in which calves are born during the spring months. However, the southeastern United States is uniquely positioned to take advantage of an alternative fall calving season. Longer growing seasons for forages provide southeastern cattle producers a competitive advantage over producers to the north in terms of feed costs.

The longer growing season also provides cattle producers in the Southeast an opportune time to calve cattle prior to extreme winter weather events, allowing beef production and availability to be more easily spread throughout the year.

“A fall calving season is not only beneficial for cattle producers, but it can also be beneficial for consumers,” said Andrew Griffith, assistant professor at UTIA for Agricultural and Resource Economics (ARE) and research coauthor. “The fall calving season can provide for a more uniform distribution of beef production throughout the year, which reduces storage costs and results in lower costs and a fresher product at the retail level.”

Information from this research, which was published in the Journal of Agricultural and Applied Economics (vol. 48, issue 3), can help cow-calf producers in Tennessee and other southeastern states as they navigate the complex decision of choosing a calving season. Additional information can be found in the associated UT Extension publication Fall Versus Spring Calving: Considerations and Profitability Comparison.

“While this research indicates possible advantages for fall calving, it is also important to consider the additional costs associated with switching seasons and labor availability in the fall when crops are harvested,” said Chris Boyer, ARE assistant professor and research coauthor.

—University of Tennessee Institute of Agriculture
via EurekAlert!

9 ways to prevent parasites in your flock

Florida is burning up