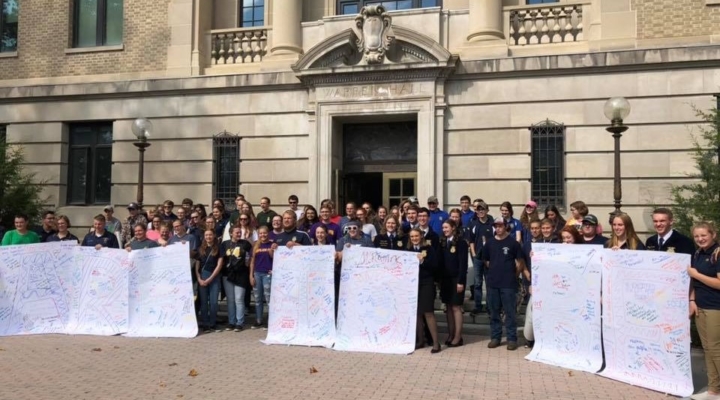 At the end of September, the Cornell University Collegiate FFA chapter hosted the Chapter Officer Leadership Training (COLT) conference. The day of leadership training was wrapped up by the release of the 2020 New York FFA State Convention theme: Dare to Be! (Courtesy Photo)

ITHACA, N.Y. — New York FFA kicked off the start of the school year in a big way! Between spending time in Massachusetts and Pennsylvania competing, conferences in Syracuse and Ithaca, and the beginning of chapter visits; September was full of opportunities for FFA members across the state. 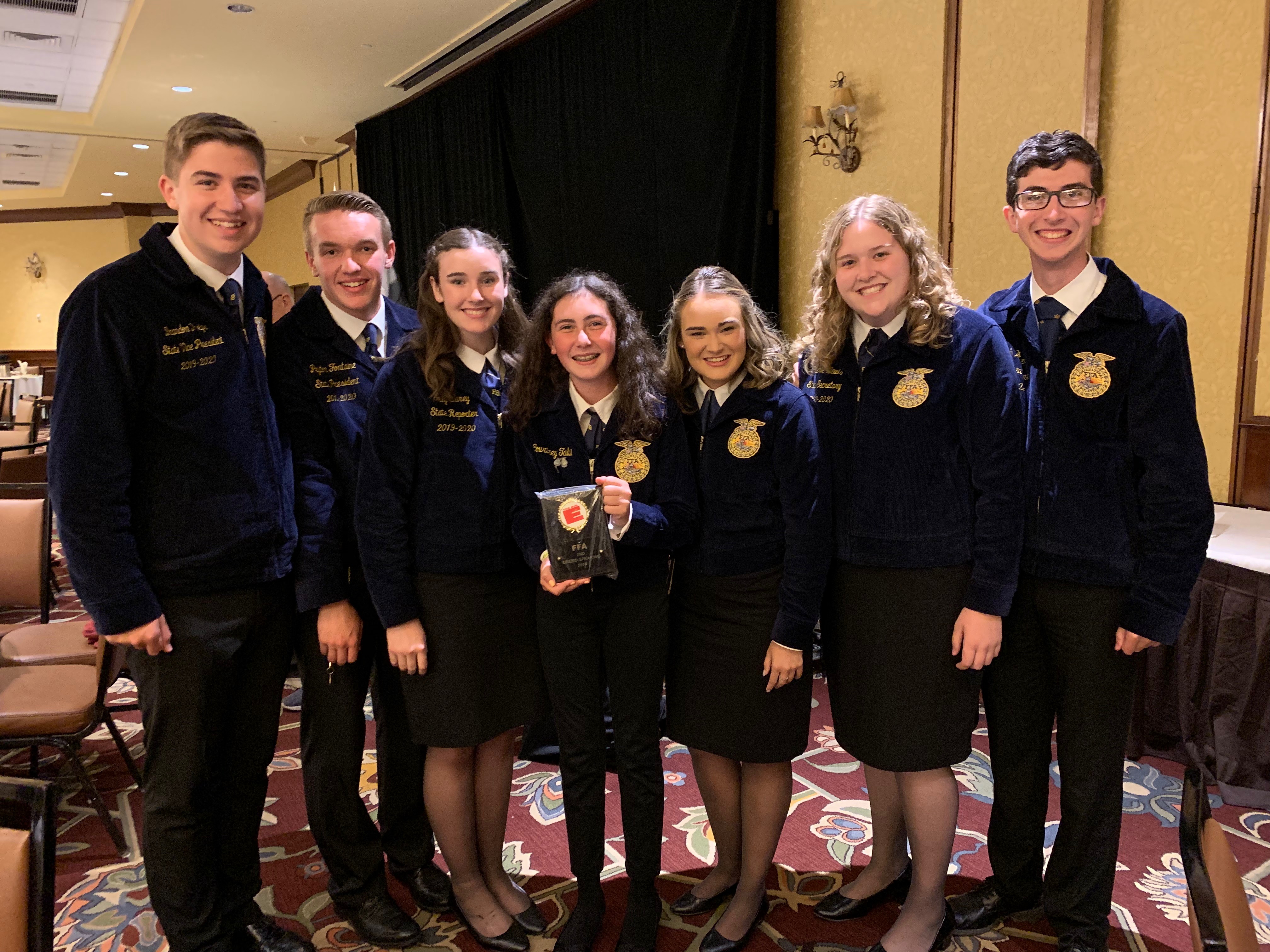 Kicking off the month was the Eastern State Exposition in Springfield, Massachusetts. For two days FFA members from across the northeastern United States were able to compete in Career Development Events and Leadership Development Events. From New York the second placing teams and individuals from State Convention and State Fair have the opportunity to compete. This year, New York was proud to have many members recognized for all their hard work. Peyton Fontaine the 2019-2020 New York FFA State President, served as a Big E intern along with other state presidents during the two days, and Emily Carey, the 2019-2020 New York FFA State Reporter, acted as the advisor during the awards banquet on Saturday evening. 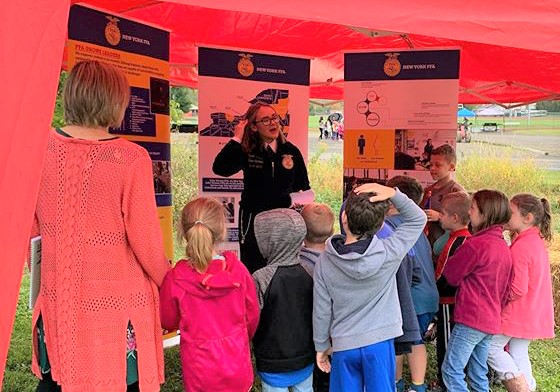 Following the Big E, the state officers traveled to Harrisburg, Pennsylvania for the All-American Dairy Show. While at the show, the state officers assisted with the youth show and by judging dairy contests. Several FFA members were showing cows, serving as dairy princesses, and competing in contests!

On September 25th and 26th, new agriculture teachers and school administrators from across the state traveled to Syracuse, New York for the New Teachers Conference. This conference was aimed at providing new teachers with more information about FFA and agriculture education to implement in their classrooms. Throughout the two days, several expert speakers and industry professionals, including the FFA state officers, spoke to the new educators about different topics to make their start as a teacher successful. 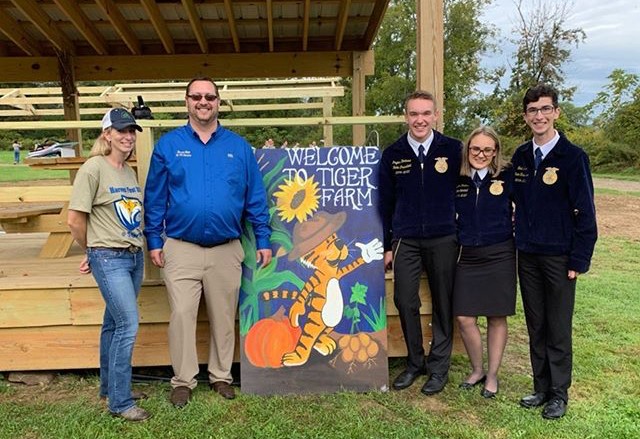 Tioga Central School hosted a farmer’s market for elementary and middle schoolers that three state officers attended on Thursday the 26th. There were interactive booths set up for the students to learn more about agriculture and FFA, and Peyton, Noah, and Taylor all had a blast working with students and teachers at Tioga.

On Friday the 27th, SUNY Cobleskill held Ag. High School Days. Students from across the state gathered on campus to compete in a variety of contests hosted by the clubs at the college. At the end of the day there was a luncheon and awards ceremony held. It was a fun day that the students enjoyed participating in!

At the end of the month, the Cornell University Collegiate FFA chapter hosted the Chapter Officer Leadership Training (COLT) conference. This conference included workshops facilitated by Cornell students and state officers. Students were able to learn about public speaking, social media use, college admissions, and much more. Also during the conference, all chapters participated in the Chapter Challenge for the opportunity to win prizes! The day of leadership training was wrapped up by the release of the 2020 New York FFA State Convention theme: Dare to Be! The state officers dare all members this year to go above and beyond in all that they do this year. COLT conference also kicked off State Officer Tour which ran the first week of October. Keep an eye out on social media for pictures from the tour and more information in the write-up!

September never fails to be a busy month, and it certainly was for New York FFA and its members!

Greetings Everyone! District 3 chapters and its members have been very busy since the start of school, but this did not stop them from going full force in preparing for competitions and participating in community service. Their hard work in these areas make District 3 and New York FFA very proud of its members. Some of their accomplishments this early in the year include:

A very strong showing at The Big E:

On October 2nd, our district will be having a district event at Liberty Ridge Farm and Corn Maze in Schaghticoke, NY. Members will experience the farm’s famous haunted house and corn maze, offering them first-hand exposure to a great example of of agritourism in our community. The members and ag teachers are all looking forward to the fun evening.

The District 3 meeting will be held on November 1st at Greenwich Central School where chapters will highlight their upcoming activities and members will mingle with their neighboring chapters. The meeting will conclude with a fun night at the rodeo in Glens Falls.

District 3 is off to a great start! Hopefully, you’re as excited as we are to see how the rest of the year unfolds!

Our member spotlight is Daniel McKernon from Argyle FFA. Daniel is 17, a senior and president of his FFA chapter. To help with chapter improvements and new ideas, Daniel has attended the 212-360 conference, New York State and National FFA conventions plus the State Leadership Experience in February 2019. He competed in the dairy judging contest at State Fair. Daniel has also helped his community by organizing a food drive for the local food bank. The food drive was very successful in that they were able to feed 30 families for Thanksgiving. In his spare time, Daniel works on his family dairy farm where he helps milk the cows, breed the cows and feed them based on the correct rations. Part of his herd are show cows that he raises and shows at his county fair. Daniel is very active in FFA and his community by helping and learning where and whenever that is possible. Keep up the good work Daniel!

Broome Co. students get taste of The Maple Experience