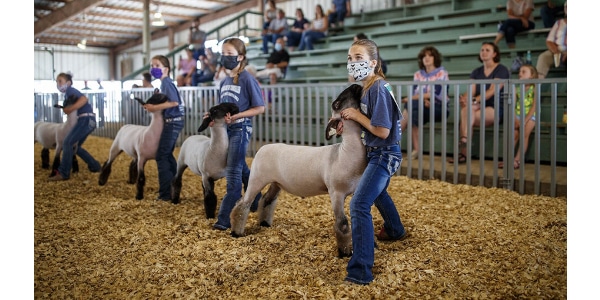 Alyvea Groteluschen of Columbus eyes the judge during the junior showmanship sheep competition July 10 at the Platte County Fair in Columbus. For livestock shows, fair officials adopted a show-and-go format, in which youth checked their animals in, showed them and took them back home all in the same day. Participants were required to wear a mask in the show ring. (Craig Chandler, University of Nebraska-Lincoln Communication)

LINCOLN — Over the past few months, 10-year-old Bailey Faltys has spent a lot of time with her 4-H sheep, Tucker and Bus.

Faltys, who lives near Columbus and belongs to the Northern Lights 4-H Club, walked them regularly. Sometimes she ran with them. She groomed them, fed them, talked to them and played music in the barn to get them used to the noise and bustle of the county fair. She spent more time with her sheep than she had last year — the first year she participated in 4-H livestock events. In part, she said, she knew more about what to expect this year and how to prepare. But in part, she had more time.

School let out early because of COVID-19, she explained. A lot of other activities were canceled, too.

For a while, it seemed like the fair could be, too. The Platte County Fair, in Columbus, is one of the earliest in the state. Officials weren’t sure whether it would be safe to hold a fair, or whether it would even be possible to do so while keeping in compliance with directed health measures put in place to slow the spread of the virus.

But the Platte County Agricultural Society, county 4-H council, county board of supervisors and East Central Health District worked closely together to make sure there would be a fair in 2020. From the beginning, their priority was making sure that youth like Bailey, who worked hard getting her livestock ready for the fair, would have the opportunity to show months’ worth of work in a safe environment.

The fair took place July 8-12 and was scaled back to focus almost exclusively on 4-H and FFA events, said Jill Goedeken, lead 4-H extension educator for Platte County. For livestock shows, fair officials adopted a show-and-go format, in which youth checked their animals in, showed them and took them back home all in the same day. Fair officials decided against in-person judging for static events, electing instead to allow youth to drop them off and pick them back up at staggered times to limit contact. The livestock sale, which normally takes place over several days, was restructured into a single hour-long event.

There was no midway, concerts or grandstand events, or crowds of people milling around, checking out the exhibits or dropping by the livestock barns to look at the sheep, hogs, cattle, chickens, rabbits and more. Instead, 4-H and FFA families were given a limited number of tickets to share with family and friends, whose temperatures were taken upon entering the fairgrounds. Youth showing livestock in the show ring were required to wear masks, as were judges and volunteers, Goedeken said.

She worried a little that the 2020 format would be met with some resistance, or at least some disappointment. That was not the case.

“We didn’t have one complaint from any families or from any volunteers,” Goedeken said. “Everyone knew that this is what we needed to do to have a fair, and I think ultimately, everyone appreciated the format.”

Hannah Milak with Columbus Community Hospital takes the temperature of Arwin Mikkelsen of Tilden before he enters the Platte County Fairgrounds on July 10. Hospital personnel screened every person entering the fairgrounds.

Because it was held so early, the Platte County Fair was a guinea pig for 2020 county fairs. 4-H extension professionals, fair boards, ag societies and other groups involved in planning fairs wanted to see how modifications designed to make county fairs safe in 2020 worked out.

This weekend will bring fairs in Butler, Nuckolls, Pawnee and Adams counties, among many others, Lodl said. The extra week gave fair organizers in those counties a little more time to plan, she said, and some of them will operate with fewer restrictions than Platte County did, as directed health measures related to COVID-19 have loosened in parts of the state. But many of the concepts that Platte County tested out — the show-and-go concept for livestock, the forgoing of in-person judging of static events — will be incorporated into at least some fairs across Nebraska this summer, including the Nebraska State Fair in Grand Island Aug. 28- Sept. 7.

And some of these modifications could stick around long after 2020, Lodl said.

Traditional livestock shows, which often require youth — and sometimes entire families — to stay at the fair with their livestock for several days can be burdensome for some families and impossible for others, she said. Some counties are considering implementing a show-and-go option for youth and families who aren’t able to spend days away from home.

This year’s 4-H state public speaking contest was held virtually, Lodl said. As a result, some youth who wouldn’t have been able to participate were able to do so.

“We’re going to see more inclusivity as a result of modifications we made this year,” Lodl said. “I think we’re also going to see more flexibility. This year is opening our eyes to new opportunities, and to meeting youth where they’re at.”

Mission accomplished in Platte County, where many kids, including 12-year-old Drew Sanne , were just glad to be able to participate.

Drew said his family debated whether to buy sheep this past spring as they wondered whether the fair would take place. They decided to buy them, and Drew, like many other 4-Hers, spent extra time working with his sheep, chickens and goats as other activities were canceled. When he got the word that the fair was on, he was, he said, “super excited.”

Sure, the usual format would have been nice, he said. But he understood this year is different.

Beefing up Kansas and Nebraska ProStart

Recording available of webinar on USDA ag assistance programs
May 9, 2021