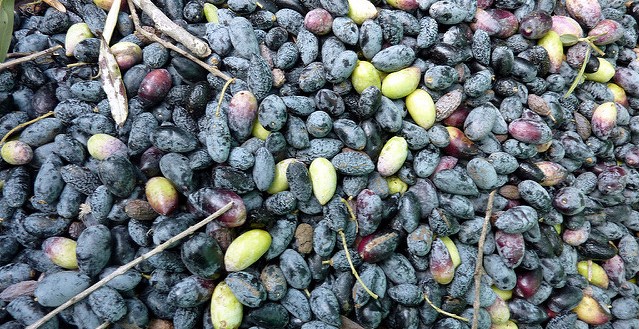 With at least 99-percent of U.S. olive production coming from the Golden State, olive oil is a growing industry in California. (ella, Flickr/Creative Commons)

SACRAMENTO — The CA Commercial Extra Virgin Olive Oil Competition is now open to Extra Virgin and Flavored Olive Oils made from olives which are 100-percent grown, pressed and packaged in California. It’s the only competition of its kind statewide and the deadline to enter is March 2, 2018.

With at least 99-percent of U.S. olive production coming from the Golden State, olive oil is a growing industry in California. The relatively mild winters and very warm summers of California’s Mediterranean climate offer a favorable environment for olive trees to flourish and produce quality fruit. Yes, the olive is a fruit, not a veggie!

The 2018 Extra Virgin Olive Oil Competition is expected to bring in up to 200 entries from across the state.The popularity of the competition is due in part to the prestigious panel of judges and the exposure and accolades that winning the competition brings.

The head judge, Orietta Gianjorio is an invaluable part of the conceptualization and development of the California State Fair Extra Virgin Olive Oil Competition. After playing an integral role behind the scenes, Gianjorio will take her place at the front of the room as head judge this year. She is an internationally certified sensory evaluator of olive oil, honey, and chocolate, an advanced sommelier (third level), and a member of the former UC Davis and California Olive Oil Council tasting panels, as well as part of their education team.  A Napa, California transplant from Rome, Gianjorio has dedicated her career to bringing the joy of good, high-quality food to the minds, hearts and mouths of all.

Joining Gianjorio are 15 other judges including:

Jean-Xavier Guinard, a Professor of Sensory Science at the University of California, Davis.  Guinard has conducted extensive sensory and consumer research on olive oil and he created and directed the UC Davis Olive Oil Taste Panel for several years.

Monica Marin, head of education at the Wine House in West Los Angeles. She is also owner of AC wine in Santa Monica and a sensory evaluator of the former UC Davis Panel.

Maria Farr, olive oil judge and sensory evaluator and founder of The Renaissance Kitchen, a company whose mission it is to educate the home cook on how to purchase, store, cook and taste olive oil.

Julie Menge, a research and development chemist. Her background includes biochemical and field research at Texas A&M; Department of Soil and Crop Sciences/Texas Ag Extension Service. She also tasted olive oil with UC Davis to improve the quality and standards of US produced olive oil. Menge is a founding member of all California internationally certified olive oil taste panels.

The judges will determine Best of Show winners, which will formally be announced at the State Capitol media event on June 21. Winners are also invited to showcase their olive oil during the Best of California Tasting reception prior to the California State Fair Gala on June 21 and throughout the CA State Fair from July 13 thru July 29.

For interviews with past winners and/or live-shots that work best for your broadcasts, please contact:
Darla Givens
Media Director
916-263-3108