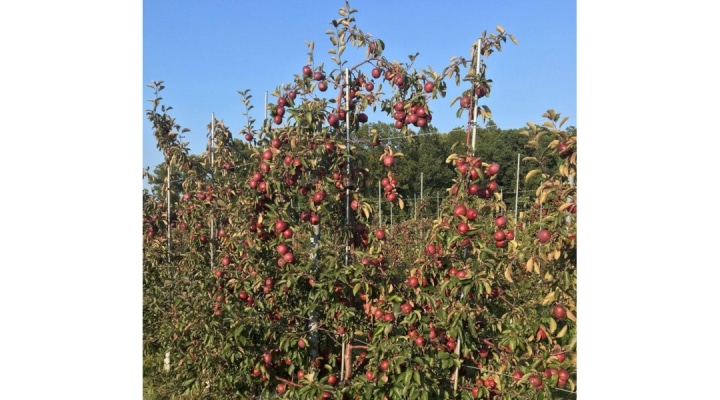 “It’s a passion project,” said Wiman, who received a grant from Clackamas County in 2017 to start his research on cider apple varieties that will grow and perform best in Oregon. “I’ve been really lucky to have staff who are also passionate about it. This is a good role for Extension in the emerging industry of cider apple production. We have good conditions to grow the apples and also have the cider market, particularly in the nearby Portland metro area.”

Oregon’s cider industry is rapidly growing and the state is becoming a national leader in craft cider production, according to Wiman. Currently, the Pacific Northwest is home to one-quarter of the nation’s cider-makers.

Since 2017, Wiman and his team have collected and propagated varieties of cider apples from around the world. They completed the time-consuming job of grafting trees onto separate rootstock so differences can be evaluated. Then the trees were planted in a temporary “nursery” before growing big enough to move to a permanent spot in the 3-acre orchard.

The timing was right for planting the orchard last spring. When it was time to dig the 1,500 bareroot trees in March 2020, COVID-19 workplace restrictions hadn’t been implemented. J. Frank Schmidt and Son, a Boring wholesale nursery, donated time, labor and equipment to lift the bareroot trees that were then planted in their permanent locations, a job completed by Wiman and his team by the time of bud break in early April.

“Most of the trees we made by grafting scion to rootstock,” Wiman said. “There are about 80 varieties, some Spanish types, American types, United Kingdom types and a few unique varieties. We have several red-fleshed cider apples. The cider gets bright red. It’s pretty amazing. A lot of people think that the red color could add value to cider.”

The trees will be compared for both tree performance and quality of fruit. The team will evaluate trees to determine which do well in the climate of Oregon’s Willamette Valley, and produce reliable fruit with less inputs like pesticides. Because of the low profit margin in growing cider apples, varieties need to stand on their own and have disease and pest resistance.

“Apple scab is a terrible disease in the Willamette Valley,” Wiman said. “A lot of these trees don’t get apple scab. We’re looking at insects, too. We get inundated by growers every year about how to protect apples from codling moth, so we’ll be looking for apples resistant to codling moth, too.”

While the market for cider is good, most of what is sold is mass-produced from juice produced from culled fresh market apples rather than true cider apples, Wiman said. Many of the heirloom and cider apples being evaluated are used for single-varietal ciders that can generate more profit.

“Most cider makers would agree that we have a long way to go to educate consumers about the difference between using fresh market or dessert apples versus real cider apples that were intentionally selected for cider-making properties; varieties that have much different qualities that make a much higher quality cider,” Wiman said. “Using fresh market apples for cider is akin to making wine out of table grapes.”

In addition to performance, fruit quality and quantity and insect and disease resistant, Wiman’s research also delves into evaluating how an open orchard design and training will affect cider apple economics.

Commercial fresh market apple production has moved away from low-density, free-standing trees to high-density orchards that have 1,000 or more trees per acre with highly dwarfing rootstocks that require trellis support. The latter requires a lot of upfront cost and labor and it remains unclear how well that model works for cider fruit production, Wiman said. More likely, the U.K. model of cider apple production with free-standing trees and a relatively low number of trees per acre is a more profitable model for Oregon growers, or something in between.

In the future, Wiman plans to evaluate mechanized harvesting systems in trellis and free-standing sections of the orchard for a more efficient and less expensive way of picking fruit.

To keep research going, surplus trees and fruit will be sold starting next year and some donations – like scion wood from the nonprofit Temperate Orchard Conservancy – have come in. The volunteer group grows 400 varieties of apple trees, many of them heirlooms that work well for cider. Other donors include Copenhaven Farms Nursery, Willamette Nurseries and Cider Babies, as well as grafting expertise from KCK Farms.

Pork Industry Forum will be a virtual event