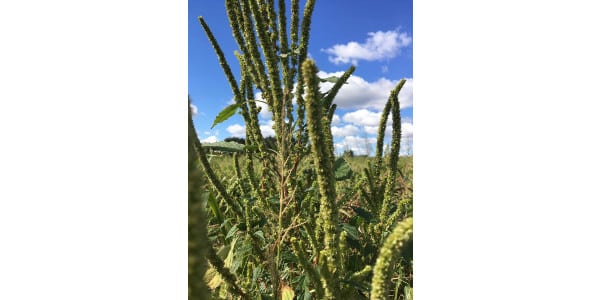 Palmer amaranth plants can reach 6 to 8 feet tall, and a single plant can produce up to 1 million seeds. (NDSU photo)

FARGO, N.D. — Millet was in demand in North Dakota in 2019 as a feed for livestock and as a cover crop.

It also was a target for Palmer amaranth, a very aggressive, difficult-to-control weed found in North Dakota for the first time in 2018. After Palmer amaranth was confirmed in multiple millet fields in Grant and Emmons counties in 2019, North Dakota State University Extension weed specialist Joe Ikley urged producers with millet fields to scout them for the troublesome weed.

That timely warning helped at least one Emmons County producer.

“He checked his millet fields after hearing about the issue and indeed found Palmer amaranth in his millet field,” Ikley says. “That infestation may have gone unnoticed without the Extension efforts to raise awareness, and the farmer was very thankful.”

Knowing the threat Palmer amaranth poses to crops, Extension agents and specialists began alerting producers about Palmer amaranth even before it was discovered in North Dakota. It can grow 2 to 3 inches per day in optimum conditions. The plants can reach 6 to 8 feet tall, and a single plant can produce up to 1 million seeds.

Palmer amaranth also is hard to control because it is very prone to being resistant to herbicides. In addition, it can be difficult to identify because it resembles redroot pigweed, smooth pigweed and waterhemp.

To help producers identify and eliminate any Palmer amaranth on their land, Extension agents and specialists developed a website (https://www.ag.ndsu.edu/palmeramaranth), posters and handouts with photos to help distinguish it from other plants, and provided some recommendations for chemical control. Their key message is to detect the weed early, before it develops seeds, pull out the plants and destroy them by burying them deeply or burning them.

“Don’t let anything go to seed,” advises Extension weed specialist Brian Jenks. “It’s much easier to pull 100 plants than to deal with millions of seeds next year.”

Agents spread the word about Palmer amaranth in a number of ways.

In McIntosh County, the North Dakota Department of Agriculture (NDDA) and County Weed Board sent letters that included Extension information to all landowners.

“In 2019, we have continued talking to producers, have sent emails and made Facebook posts, as well as hanging up posters in the area,” says Crystal Schaunaman, Extension’s agriculture and natural resources agent in the county. “I have also talked about how to identify it at various meetings such as the Tri-County Plot Tour and several meetings in January/February, and looked at many pictures of suspect plants which have been texted to me.”

In neighboring LaMoure County, Extension agriculture and natural resources agent Julianne Racine has scouted fields with agronomists and on her own.

“Earlier in the growing season, I visited different ag businesses and gathering spots, speaking with managers and community members about identifying characteristics and scouting their own fields,” she says. “Everyone was left with handouts and posters. I also try to stress that people should call us or their weed board. As well, I put articles in the paper and soil conservation newsletter reminding people to keep vigilant.”

Extension efforts are similar in other counties.

“I have made efforts to make producers more aware of the problem through news columns, radio interviews, crop meetings, pesticide trainings and personal conversations,” says Sheldon Gerhardt, the agriculture and natural resources agent in Logan County. “At my pesticide training, I have used a problem-based learning presentation where producers need to discuss how they will manage the potential problem on their farm.”

Emily Trzpuc, the agriculture and natural resources agent in Emmons County, has been helping producers identify suspicious plants and educating them on where to look for Palmer amaranth.

“Producers should be sure to get out and walk their fields to look for this weed since crop height will likely match that of the mature Palmer amaranth that could be in the field,” she says. “If producers are suspicious of any pigweed species they encounter in their fields, they should contact their local Extension agent or their county weed board officer,” she adds. “From there, we can help them get their plant identified by our NDSU Extension weed specialists or through genetic testing.”

A DNA-based assay the National Agricultural Genotyping Center in Fargo developed in 2019 has been very helpful in determining whether weeds producers find actually are Palmer amaranth, according to Tom Peters, Extension sugarbeet agronomist and weed control specialist at NDSU and the University of Minnesota.

“The assay provides us with a very quick way to follow up on leads,” he says.

He notes that NDSU Extension’s efforts to educate producers about Palmer amaranth is a partnership with the NDDA. The department has a map at https://www.nd.gov/ndda/sites/default/files/PalmerMap_919v2.pdf that shows where the weed has been found in the state.

Extension hosted a training meeting in December to provide new agents and agents with less weed management experience with an opportunity to learn more about Palmer amaranth.

“The outcome of the meeting will be talking points and training materials agents will disseminate in their winter producer meetings,” Peters says.

Palmer amaranth has been found in eight of North Dakota’s 53 counties.

“We believe the new counties in 2019 (Grant, Emmons, Morton) were due primarily to contaminated millet seed,” Jenks says.

More Palmer amaranth was found this year in two counties where it was spotted in 2018.

“However, these fields are being monitored and I think the farmers are trying to be vigilant and not let plants go to seed, so I am hopeful that what was found in 2018 will not become a huge problem in the future,” Jenks says.

“Without the efforts of Extension, I have no doubt that Palmer amaranth infestations would be much more widespread,” he adds. “People know about Palmer amaranth primarily due to our education efforts. People are aware and looking for it. People also appreciate us going to the sites, teaching them about the plants and discussing future options.”