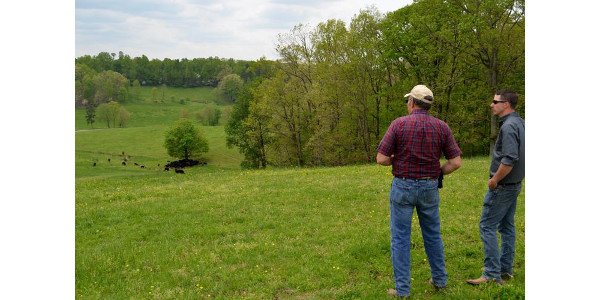 McKEE, Ky. — Most cattle producers want to run as efficient an operation as possible while nurturing a healthy environment in which their livestock can thrive. A University of Kentucky Cooperative Extension Service program in Jackson County is striving to help local producers do just that.

David Coffey started a farm management program in 2017 in the county to focus on producers’ total operations.

At the beginning of the program, producers set short- and long-term goals. Since then, Coffey routinely follows up with each operation to help producers find ways to accomplish those. While the program was open to producers of all commodities, the Eastern Kentucky county has a large concentration of beef cattle producers. Therefore, most of the program’s participants raise cattle as part of their overall operation.

Sixth-generation farmer Doug Wilson is one of the participants. He farms with his three sons on land his family has owned since 1831. With his sons taking on active roles in the operation, the Angus and Angus-based seedstock producer plans on expanding his herd and eventually marketing more animals. He also wants to do a better job of managing his forages and extending the grazing season. The Wilsons are beginning to fence their entire 500-acre farm to improve their forage management through rotational grazing. With woodlands covering part of the farm, Wilson also has timber and wildlife to manage.

“Some of my snow days I’ll spend with Dave, and we’ll talk about total farm planning,” Wilson said. “It’s more than just what we are going to breed to this spring, it’s the total operation — how are we going to manage forages, how are we going to manage water, how are we doing with our nutrients, how do we best manage our wildlife, how we manage our timber? We want to concentrate on everything that will make not just healthy animals, but a healthy environment for them to grow up in.”

Bob Hornsby is another participant. A cow-calf producer since 1975 at Happy Hollow Farms, he wants to reduce his herd numbers from 125 cows to 50 to have more flexibility in retirement. He has worked with Coffey on soil fertility, weed control and extending the grazing season.

“We are tightening up the operation a little bit,” Hornsby said. “I was running more cows but wasn’t as intensive with my rotational grazing before. We were a little light on soil testing, so we started improving that last fall.”

Since the program began, Hornsby implemented a nine-field rotational grazing system and installed waterers in the fields to help him maximize his forage production and utilization while limiting the amount of hay he needs to produce for the winter.

“This farm is rolling,” he said. “You can cut hay off of it. We have in the past, but I would rather let the cattle do the job.”

Coffey has been pleased with the progress many of his producers have made through the program. He plans to keep working with them, and might open up the program to more local producers next year.

UK Cooperative Extension Service is part of the UK College of Agriculture, Food and Environment, which is dedicated to improving people’s lives through excellence in education, research and outreach.

How NOT to submit plant samples for diagnosis