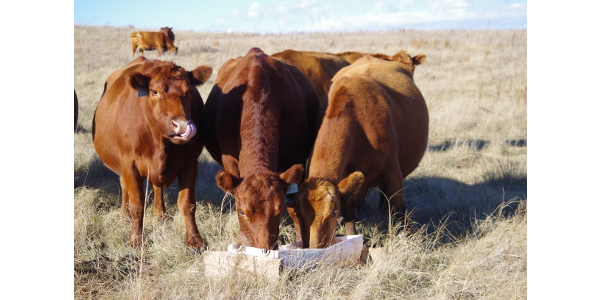 Producers must have a written order from their veterinarian before buying antibiotics intended for use in livestock feed. (NDSU photo)

FARGO, N.D. — The veterinary feed directive has been in effect for seven months, and the phone calls to North Dakota State University Extension Service veterinarian and livestock stewardship specialist Gerald Stokka have tapered off considerably.

He’s hoping that’s because of Extension specialists’ and agents’ extensive efforts to educate livestock producers, veterinarians and livestock feed distributors about the federal regulation before it went into effect on Jan. 1.

The veterinary feed directive (VFD) requires producers to obtain a written order from their veterinarian before buying antibiotics intended for use in or on animal feed. This regulation is designed to limit the use of antibiotics in livestock to those necessary for animal health. That means drugs for treatment, control and prevention of illnesses. The VFD does not affect current drugs labeled for food production purposes, such as ionophores for enhancing growth or improving feed efficiency.

Agents and specialists reached producers, veterinarians and feed distributors in a variety of ways. Agents held several meetings about the VFD for producers, and the agents, Stokka and Pederson spoke about it at other meetings such as stockmanship and livestock stewardship workshops.

Specialists and agents also created YouTube videos, a publication, brochure and handout; sent out news releases; discussed the VFD in newspaper columns and on radio programs; gave radio and TV interviews about it; and shared information through social media. In addition, Stokka spoke on the topic at veterinary meetings in North Dakota and other states.

“I feel we have made progress in getting out the word about the VFD,” Stokka says. He estimates they’ve reached more than 20,000 people.

As part of this effort, agents encouraged the livestock producers in their counties to develop a good working relationship with a veterinarian so the veterinarian is familiar with their operation.

“I think what we found is our producers have a great relationship with their veterinarian,” says Nicole Wardner, NDSU Extension’s agriculture and natural resources agent in Sheridan County.

She also discovered just how far ahead NDSU Extension was in educating producers about the VFD when she attended the National Cattlemen’s Beef Association meeting in Nashville, Tenn., earlier this year. She heard from beef quality assurance program directors that in many states, producers didn’t receive any education on the directive until after it went into effect.

“It was very evident that NDSU Extension was very proactive on this,” she says.

Jeff Schafer, who is a feed dealer and has a feedlot and cow-calf operation near New Rockford, agrees Extension did a good job of educating producers about the VFD.

However, the VFD process has posed some challenges. Schafer says they include veterinarians’ unfamiliarity with medical feed additives; some lack of communication among veterinarians, producers and feed dealers; and delays in the electronic transfer of a VFD from the veterinarian to the feed dealer.

“It’s been a huge learning curve for everyone,” he adds.

Agents and specialists say they’ll continue to be available to answer questions from producers, veterinarians and feed dealers about the VFD.

However, the VFD is only part of an overall management and health approach called livestock stewardship, Stokka says. That includes implementing disease-prevention programs to reduce the risk of livestock becoming ill, handling and transporting livestock in ways that keep them from becoming stressed, making sure livestock receive the right feed rations to match their needs, and selecting cows with genetic traits such as calving ease and mothering ability.

Stokka often hears from producers who are dealing with health issues in their herd, and they want a quick solution, such as a vaccine or treatment. Instead, he wants to figure out what caused the problem and how to prevent it from happening again.

“How can I manage the cows and calves better so I don’t have to use products – that’s good stewardship,” he says.

The basics of animal husbandry have been a major focus of VFD meetings Yolanda Schmidt, Extension’s agriculture and natural resources agent in Pierce County, helped organize for producers.

“If these basics are in place, we might not need to feed the antibiotics,” she says.

NDSU Extension also links environmental stewardship with livestock stewardship. Livestock environmental stewardship specialist Miranda Meehan helped develop a number of workshops and field tours to educate producers about grazing management, as well as tools to help them. Those tools include a video, a grazing monitoring stick, publications including “Determining Carrying Capacity and Stocking Rates for Range and Pasture in North Dakota” (available athttp://tinyurl.com/CarryingCapacityStockingRates), a mobile app and the web-based “NDSU Range and Pasture Calculator” (www.ag.ndsu.edu/sheets/range-and-pasture-calculator).

Making sure livestock have adequate water is another key component of stewardship, particularly in the drought conditions North Dakota is experiencing this year. Agents and specialists have urged producers to get their water tested because drought can compromise water quality in ponds and dugouts, causing elevated levels of salts, minerals and bacteria.

“What is especially important is to keep a close eye on water quality during drought when using a shallow water source and sources with a history of water quality issues,” Meehan says.