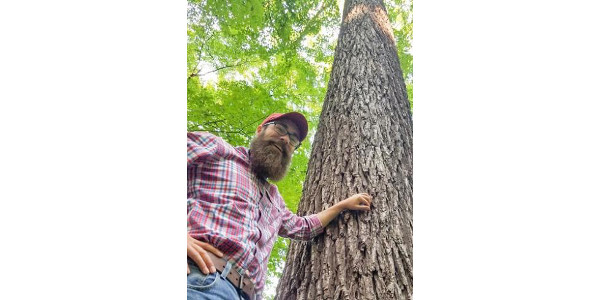 Beck began his new role in August, after completing his Ph.D. at Iowa State in 2018. He previously held forestry-related jobs in Michigan, Illinois and Kansas, and is excited about the opportunity to grow and promote the value of Iowa’s forestry. (Courtesy of ISU Extension and Outreach)

AMES, Iowa — Forests and woodlands may not be among the first things that come to mind when people think about what grows in Iowa.

“Forests are important for many reasons, including water quality improvement, wildlife, timber and aesthetics, and we need to be promoting them more,” Beck said.

Beck began his new role in August, after completing his Ph.D. at Iowa State in 2018. He previously held forestry-related jobs in Michigan, Illinois and Kansas, and is excited about the opportunity to grow and promote the value of Iowa’s forestry.

“I really want Iowans to realize that these woodlands are valuable to their property, and they’re a value to their farming enterprise,” he said.

Beck has been learning about the value of forestry since he was 10. One day, his father told him about forestry as a major – kind of out of the blue – but that occasion led to a path that would become his education and career.

Like many students, he at first thought forestry careers were limited to a forester or park ranger. But he soon realized that forestry jobs are much more diverse, and include such places as state and federal government agencies, private industry, and nonprofits.

Although the bulk of his work is in extension, he also serves as an assistant professor and enjoys teaching students about the value of forestry.

One of his biggest passions is combining the hydrology and water quality benefits of trees, with the overall benefits of a healthy forest. His research shows that trees play an important role in water quality, whether they’re along streams and rivers acting act as riparian buffers, in a separate woodlands, or in urban locations.

“I want to get forests on people’s radar, including their value to water quality and flooding control, wildlife, and as a sustainable source of income,” he said.

One place Beck hopes to meet Iowans is at the six upcoming forestry field days planned for October. These statewide events are designed to explain current forestry issues, and as a way for Iowans to meet and interact with forestry experts.

He looks forward to connecting with Iowans – including those who may not have historically been involved with forestry, or considered its economic value.

“When forests aren’t valued, they are at so much risk for being degraded or being removed. I’ve seen it and I want to prevent it,” he said.