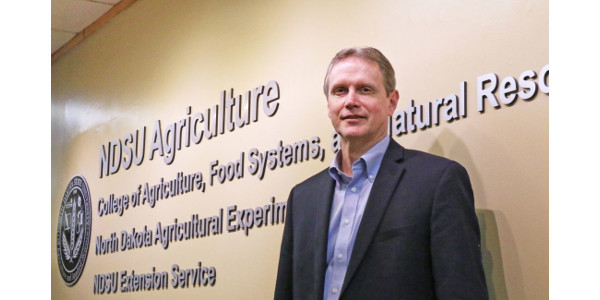 Faced with budget issues from a 14-percent cut by the state legislature in the last session, Dr. Chris Boerboom has the unenviable task of making Extension run smoothly despite a $4.1 million cut in state funding. It means the elimination of 20 full-time positions. (Courtesy of NDFU)

FARGO, N.D. — His calm demeanor and soft-spoken nature suggest no cause for concern in the top office of the North Dakota State University Extension Service in Fargo.

Faced with budget issues from a 14-percent cut by the state legislature in the last session, Dr. Chris Boerboom has the unenviable task of making Extension run smoothly despite a $4.1 million cut in state funding. It means the elimination of 20 full-time positions.

“It’s a hit,” the Extension Director said. “Eighty percent of our budget goes toward people. When that much is cut, it means we’re losing people.”

Not that Boerboom is complaining, as the weed scientist-turned-administrator said he understands what it means to be under the umbrella of government. Still, the strength of Extension is its people and those relationships, he said.

“We’re here to serve the state, so we’re a state agency in that regard,” he said. “If cuts have to be made, that’s what we’ll do. … We’re also a people organization. It would be different if we were a program that managed a bunch of grants. We really value the working relationships we build (with communities).”

Hoping to avoid layoffs, Boerboom said he decided against making strategic cuts, which would target specific positions and eliminate them. When an employee has left their job for whatever reason, Boerboom has opted not to refill the position unless absolutely necessary. That means some departments may be light on help, though Boerboom emphasized that every department has “felt the pain” in some fashion.

“You look at animal science, and they probably ended up with an unfair share of retirements and departures,” Boerboom said. “It might hit certain units harder than others when the cuts happen this way. Unfortunately, that’s what happens.

While the positions that have been cut have helped secure the budget, it’s not the only place Boerboom has had to trim. Professional development and continued education has dropped significantly, and that means Extension employees could be missing out on the latest developments in their fields.

Boerboom stressed the need for professional development to keep Extension out front in the rapidly changing industry of agriculture, but simply said he couldn’t put it ahead of people.

“When we weigh people vs. professional development, we choose people,” he said. “We’re trying to maintain the core as best we can because it’s about the people that we serve.”

Boerboom said he’s not concerned about Extension’s ability to draw and retain quality employees despite the instability in the budget, noting that Extension’s turnover rate has been below the average of its counterparts in other states.

“You always think about recruitment and retention,” he said. “We’ve got good people, and other universities could come along and headhunt our people away. Sometimes, we have challenges having as competitive of salaries as other states. But our benefits package that our staff receives, thanks to the state and the legislature, really does make a difference.”

Timing has become one of the most important factors in hiring employees and balancing salaries. When someone leaves, their position is often held open for a range of time, which helps budgetary concerns in filling other positions.

One such example is the position of farm management specialist, which was held by Dwight Aakre for nearly 30 years before he retired last year. One of the duties of the position is to help farmers and ranchers understand how the farm bill affects them. Currently, the money is not there to fill that position, but Boerboom is hoping to have the funding by next year.

“Dwight Aakre was our ag economist — he’s helped with five farm bills,” Boerboom said. “With budget cuts and uncertainty, we’re finally getting to a point where we can refill this position. If a farm bill would have come right now, we really would have been in a world of hurt. The expertise he brings in interpreting, and the tools for farmers to analyze their situation — we would have been without it. We’ve had to wait for other positions to open up so we can take those dollars and put it back over there.”

A similar situation has arisen in Williams County, where the county is patiently waiting to fill its Extension agent position, according to Boerboom. Extension county agents’ salaries are halved. The county pays half the salary, the operating budget and the office space and support, while Extension contributes the other half of salary and the benefits package.

However, Extension can’t meet its half yet for budgetary reasons.

“It’s really frustrating because I want to serve that county, and they want to serve their citizens, too,” Boerboom said. “Williams County really values that position. They want it filled. … We’re looking at how we can equitably rebalance that funding amount.”

Extension is re-evaluating its partnerships and programs. The State Board of Agricultural Research and Education (SBARE) — the budget and policy-making body that oversees Extension — is performing a comprehensive review.

Boerboom said Extension continues to look at new ways to save money on top of the cost-saving measures it currently applies, like possibly revamping the system of county agents across North Dakota. Some counties, like Stark and Billings, and Eddy and Foster already share agents.

“That’s on the table,” he said. “There are different models and arrangements that can be made. It really depends on the size and capacity of the county, and its needs.”

Sharing a position has been a way to compromise for Extension.

Prior to 2016, the state didn’t have a specialist to deal with issues that might arise from the 66,000 sheep on farms in North Dakota. Hesitant to devote a full-time salary to the position, North Dakota’s Extension office called up the University of Minnesota Extension office, and the two worked out an agreement to share the position. Travis Hoffman was hired last year to cover both states.

“Because of that, we’re able to maintain that specialized expertise in sheep production,” Boerboom said. “That’s really a win-win.”

It’s not the first time Extension went that route. It started more than three decades ago with sugar beets, also a shared position with Minnesota. The two also share specialists for potatoes and human nutrition. Gerontology, the study of aging, is a shared position with South Dakota State University’s Extension office that specifically looks at the health benefits and cost savings of keeping seniors in their own homes, and how best to make that happen.

“I think there could be some pretty neat potential there,” he said.

One of the most notable differences for families across the state will be the fee associated with 4-H participation. Previously it was free for all families, but a $20 charge per child has been instituted with a $60 cap per family. It could mean up to $100 thousand in additional income to help offset costs.

Boerboom said it’s an avenue that is taken with other areas of Extension such as weed science or succession planning. However, Boerboom stressed that the 4-H program would do everything it could to maintain participation, whether it happens through county sponsorships or state scholarships. Participants who enrolled prior to Nov. 1 of 2017 did not have to pay a fee for next year.

“If someone wants to be in 4-H, we’ll figure out a way for them to be in 4-H,” Boerboom said. “(The fee) really shouldn’t be a barrier, and I hope it’s not. I hope people will ask if it is, because we’ll do our best to find ways around it for people who need it.”

Extension had a study done to prove its value to North Dakota families.

Among participants in Extension’s artificial insemination (AI) breeding education program, 78 percent indicated a $15,500 increase in whole herd value per operation. Fifteen thousand producers attended Extension’s farm bill education meetings and said they used that knowledge when making decisions with the Farm Service Agency. And 94 percent of participants in the Design Your Succession Plan program are prepared to meet with a professional.

With youth, 4-H has grown 19 percent the past five years with 29,306 youth participants, and 86 percent of youth reported learning new skills at its camp. In the Gearing Up for Kindergarten program, 82 percent of parents rated the program as very/extremely useful.

On the nutrition side, 83 percent of participants in the Expanded Food and Nutrition Education Program improved at least one nutrition practice, and 63 percent of adults in the Family Nutrition Program spend their food budget more wisely. The nutrition aspect of Extension has been specifically brought into question as either not relating to agriculture or duplicating other government programs.

“We do not duplicate — sometimes, we collaborate with other agencies,” Boerboom said. “They come to us and want help with education because we have a network across the state.”

In 2017, the worst drought in a long time hit North Dakota, leaving ranchers looking everywhere for nutrition for their livestock. Extension undertook the task of education on grazing practices, feeding, production and farm family stress. Likewise, when the oil boom hit North Dakota, Extension put together meetings on the rights of landowners.

“(The money) the state is investing in ag research and education is really a very modest amount to keep that economic engine running,” Boerboom said. “It’s critical for the state.”

Will the budget cuts affect Extension’s ability to get out in front of issues? Boerboom hopes not.

“It’s always on our minds, but hopefully it’s not on the minds of the agents and specialists,” he said. “We’re always continually doing the mental gymnastics of one position meaning this much (money) and another meaning this much. When one comes open, you’re trying to think through that all the time.”

Boerboom said he understands why it’s hard for some people to make a personal connection with Extension, but that it really does affect all of North Dakota.

“For folks that might be reading about Extension, they may not go through the door of the county Extension office,” Boerboom said, “but that doesn’t mean they’re not getting a benefit from it. The private (financial) value might be with the rancher or farmer, but everybody in town is benefiting. The grocery store, doctor, barber and then also the school. It’s keeping the town alive.”

NDFB on removal of prior notification for Dicamba

Use the numbers when bull buying