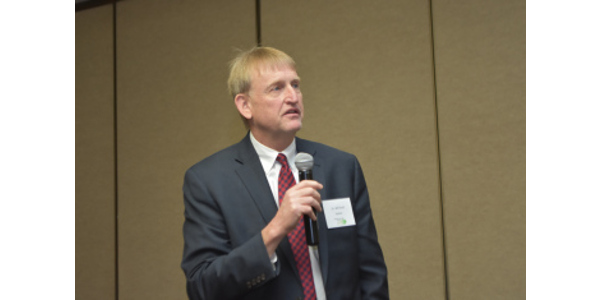 FRANKFORT, Ky. — (A version of this article first appeared in The Farmer’s Pride, November 16 issue)

Agriculture here in the United States, and specifically in Kentucky, has had a tough few years in terms of income, due to a peak, and in some instances a decline, in consumption of grain and meat products.

That came as no surprise to Dr. Will Snell’s audience at the Kentucky Agribusiness Summit held recently in Louisville. The AgriBusiness Association of Kentucky hosts the annual event as an informational and networking opportunity for Kentucky’s agricultural leaders.

The University of Kentucky agricultural economist noted that, so far, 2017 has been a better year for farm income, but he emphasized that improving ag exports will assist in an economic rebound.

“We, as an industry over the past several decades have become more and more dependent upon international markets,” Snell said. “Right now, over a third of the value of agricultural production in the United States evolves from sales overseas.”

Nationally, according to Snell, about 60 percent of the tobacco harvested ends up on foreign markets and around 70 percent of the Commonwealth’s leaf goes out of the country.

Snell says the U.S. is exporting agricultural products to nearly 200 countries, worldwide. China, Canada, and Mexico make up about 45 percent of all ag exports.

Where are things headed in the future? “The world population is going to hit 9 billion by 2050, 30 percent more mouths to feed,” Snell projected. “Population gains, along with income gains will basically require doubling food production.” Even with current technological advances Snell says that presents a formidable challenge, but also offers many global trade opportunities.

Information from Brookings Institute and World Bank indicate that by 2030, 60 percent of the world population will be designated as middle class, Snell said. “This is a group that wants money available for things like healthcare and entertainment, but they also buy more food, fiber, and fuel,” he noted. “We in agriculture are in the food, fiber and fuel business, so it’s going to present a lot of opportunities as we move ahead towards this era of an increasing global middle class.”

Naturally, the success of international trade is based on treaties that outline the terms of doing business between countries. The North American Free Trade Agreement (NAFTA) has been one of the most visible and perhaps most controversial of those treaties. Snell says that since NAFTA was enacted in 1984, exports to Canada and Mexico have increased by about 400 percent. Now, with the agreement’s future in doubt, the agriculture community is concerned about what impact its renegotiation might have.

“I don’t think you’ll find too many people in agriculture, either economists or farmers or farm organizations, that aren’t extra concerned right now with the potential of the U.S. withdrawing from NAFTA,” Snell said.

On a positive note, Jeff Pendleton, general manager of Hallway Feeds serves as a delegate to the American Feed Industry Association and has had an opportunity to be briefed on the NAFTA negotiations. He says that, while the Trump administration is pushing for resolution of the matter by year’s end, there is a mandate to do nothing to negatively impact agriculture.

In closing, Snell emphasized that Kentucky is in a good position to benefit from an improving world market and is currently the home of a number of international businesses and many more are coming to the Commonwealth to learn more about the diversity of agricultural products available here. Kentucky’s location and available infrastructure also make it an attractive place for international concerns to do business.