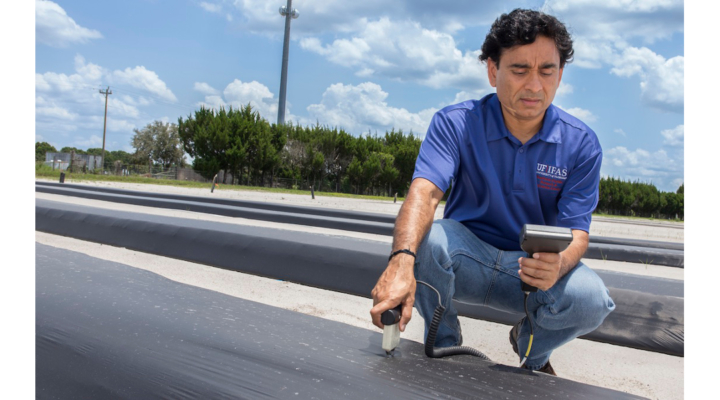 GAINESVILLE, Fla. — While producers and growers across Florida lost some, if not all, of their crops due to Hurricane Irma, a University of Florida researcher saw his experimental bedding survive the storm.

“We were testing for flooding, and didn’t expect to have winds strong enough the effects of wind force on crops,” said Sanjay Shukla, UF/IFAS professor in the agricultural and biological engineering department. “So, when the hurricane hit we were, in a way, very fortunate. Here was an opportunity to see if geometric bedding that I designed could withstand and protect crops during a severe storm.”

Shukla has hundreds of acres of crops at the UF/IFAS Southwest Florida Research and Education Center in Immokalee, Florida, where he is based. He uses what he calls “compact bed geometry,” which is used in plasticulture. The use of plastic in agriculture is used globally to produce high-value vegetable (e.g. tomato, pepper, eggplant) and some fruit crops.

The crops are grown on raised soils beds that are covered with plastic. The plastic mulch protects the crops from pests including weeds, provides a warmer soil environment and protects the fertilizer from being washed away, Shukla said. The end result is a high yield and consistent fruit quality, he said.

Instead of planting crops on beds that are normally 6 to 8 inches high and about 3 feet across, Shukla planted them 10 inches to a foot high and 1 ½ to 2 feet across. The crops were more narrow and higher.

With the compact bed designs, Shukla and his team in an ongoing experiment were able to demonstrate that farmers could still produce the same crop but with lower inputs, including cost. This meant that producers that use two drip tapes can now use only one without sacrificing production, he said.

While some growers had used modified versions of Shukla’s design, he hopes those who are replanting will consider using his exact measurements. “Using geometric bedding will help growers save crops during severe storms, increase yield and save money,” he said.