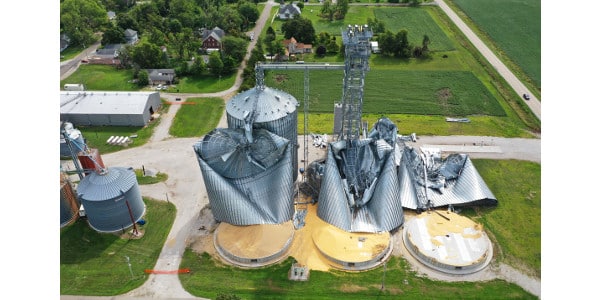 ANKENY, Iowa — Expedited federal disaster assistance for Iowans affected by last week’s historic windstorm is greatly appreciated and critical to fast-tracking much-needed services and repairs to businesses and families who are suffering.

“Federal disaster assistance will get us back on our feet in the aftermath of this storm, but we’re still standing on shaky ground economically,” says ISA President Tim Bardole of Rippey. “Farms and rural communities need a long-term fix to what’s ailing them and its needed sooner rather than later.”

ISA’s call for action on key ag policy provisions coincides with President Donald Trump’s visit today to eastern Iowa. The area was among those hard-hit by the Aug. 10 derecho that impacted up to 14 million acres of soybeans and corn statewide. The storm also destroyed or severely damaged an estimated 57 million bushels of permanently licensed grain storage and tens of millions of bushels of on-farm storage.

The derecho’s timing was just as devastating as its impact. The loss of key export markets, gutting of the Renewable Fuel Standard (RFS) refinery exemptions by the EPA and economic downturn resulting from COVID-19 have combined to stretch rural Iowa to its limit, says Bardole, whose soybean, corn and pig farm took a direct hit by the Aug. 10 storm.

“Everyone connected to farming – and that’s a good chunk of Iowa – has been struggling under the weight of an economic recession that began impacting farmers like me starting seven or eight years ago,” he adds. “The situation continues to worsen to the point where some farm families won’t be around to turn the corner, should one get here.”

An analysis of market share losses for U.S. soybean and corn farmers conducted by Iowa State University’s department of economics and funded in part by ISA paints a sobering picture.

U.S. soybean and corn farmers have experienced massive export-market-share losses over the past three years, driven largely by a trade war with China and currency depreciation among competitor countries adept at growing soybeans, including Brazil.

Bardole says it’s all but assured that China will not hit the $36.5 billion target for U.S. ag purchases under the year one, phase one agreement. While there has been a recent uptick in soybean sales to the country of 1.4 billion people, more sales are needed to positively impact the price he can get for his soybeans, provided he has a crop to sell.

“Agricultural trade is a winner for both countries,” he says, “so expediting a resolution to the ongoing trade impasse is a critical first step to restoring some much-needed optimism to rural America.”

Adding to the misery is the continued undermining of the Renewable Fuels Standard by the Environmental Protection Agency.

“If there’s one thing we should get right, it’s domestic biofuels policy,” he says. “Yet this Administration continually gets it wrong by allowing the EPA to go rogue on waivers. It’s long past time to end this illegal activity that thwarts the increased production of homegrown energy.”