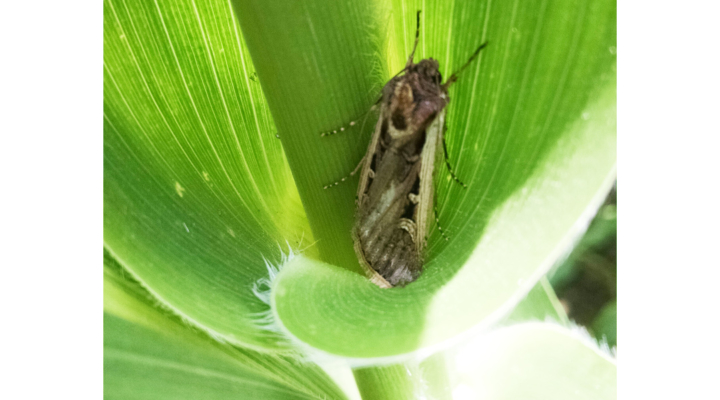 A Western bean cutworm moth nearly hidden in a leaf in a NNY corn crop in the summer of 2018. (Photo: Michael E. Hunter)

Data from the traps alerts growers to begin scouting their fields for the risk of WBC and corn ear damage by WBC larvae. Monitoring this pest facilitates early treatment intervention at lower levels of WBC and can help limit crop damage.

The WBC Trapping Network is a program of the New York State Integrated Pest Management Program. Pheremone traps are deployed to capture WBC moths in July and August. The trap catches are identified and counted to help indicate peak flight and fields at risk for WBC damage.

“We saw differences from 470 moths in one trap to nearly 2,500, the highest for anywhere in the state, in another trap just 11 miles away one year. Western bean cutworm populations continue to increase in Northern New York, requiring close monitoring and future management of this insect pest to prevent yield and quality losses,” adds Michael E. Hunter, a Cornell Cooperative Extension field crops specialist.

The traps will be deployed again in 2019. Growers can receive weekly e-bulletins from Extension and the NYSIPM Program.

Junior members take on ‘Angus in the Little Apple’