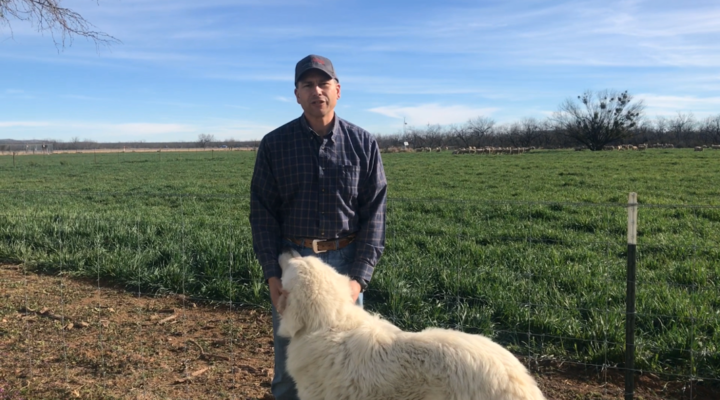 “We chose Bill out of a field of applicants because he already was using livestock guardian dogs for his own sheep,” said Dr. John Walker, AgriLife Research center director. “He was an ag teacher, so he had that communication and educational background we were looking for as well.”

“We had had a couple of LGD field days and we had a project where we put several livestock guardian dogs with board members, and they liked what they saw,” Walker said. “The funding by the Texas Sheep and Goat Predator Management Board allowed us to expand our LGD program so we could do, and learn, more.”

The overall mission of the LGD program is to increase the number of people who are using livestock guardian dogs, which in turn increases the number of lambs and goats ultimately making it to auction or adulthood, thereby increasing industry revenue.

“We are delighted to have hired Bill Costanzo for our Livestock Guardian Dog program,” said Dr. Reid Redden, Texas A&M AgriLife Extension Service sheep and goat specialist, San Angelo. “It is critically important to the sheep and goat industry that we have someone whose sole responsibility is to help the industry better utilize livestock guardian dogs to prevent sheep and goat predation in Texas.

“Moreover, I feel Bill has the right skills, passion and work ethic to accomplish, if not exceed, our vision for this desperately needed program.”

Costanzo and his family moved from the rural town of Valley Ford in Northern California. He worked as a high school agriculture teacher for over 18 years, spending the last dozen years teaching at Tomales High School. Costanzo graduated from Fresno State with his bachelor’s degree in agriculture education.

“I had never planned on having a career as a high school ag teacher; I wanted to be involved in agriculture and teach agriculture, but my original plan was to eventually teach at a junior college,” said Costanzo.  “I saw the AgriLife job posting in the American Sheep Industry newsletter and I applied.It seemed like a dream job for me, because I would still be working as an educator– but I’d be educating adults, which was what my original goal was.”

Costanzo has utilized livestock guardian dogs for the past eight years with his own flock. Dogs are utilized extensively in California to protect sheep flocks and goat herds, in part due to environmental regulations and laws against trapping in many areas.

“You really can’t raise sheep or goats in California successfully without livestock guardian dogs,” said Costanzo. “I think there’s a lot of potential in the sheep industry at this point. I want to encourage people to use livestock guardian dogs, because they have worked so well and were so successful for me. I’m excited to be a part of the LGD team and my new community.”

One of the main things Costanzo is tasked with in his new role is finding answers for many of the as-yet unanswered questions related to using livestock guardian dogs in Texas. Only commonly used in the U.S. since the 1970s, there is still a great deal unknown about them and how to best utilize their talents.

“With the LGD program, we want to increase awareness of livestock guardian dogs and how to properly use them — and hopefully increase the use of them,” said Walker. “There are still a lot of questions: How do you best use them? What are the best management practices? How often do they get off the property? Where do they go?”

Many of those questions have led to studies currently underway in the LGD program that Costanzo will expand upon.

“There’s a lot of technology available now that wasn’t before. For example, we’re developing automatic feeders where an RFID chip on the dog’s collar triggers the feeding and keeps other animals like raccoons out of the feed,” Walker said.

“We’re also looking at cheap GPS trackers where you can get real-time data on where a dog is at on your mobile phone,” he added. “We want to test out available equipment and then be able to recommend to people who want to use it, what we think the best options are.”