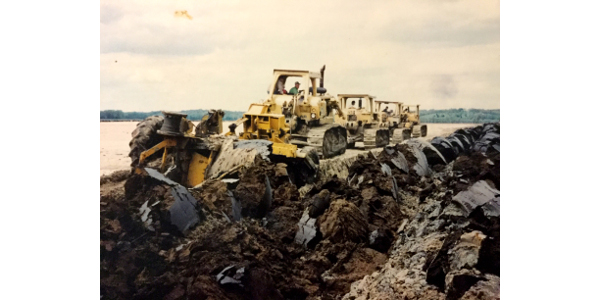 AUGUSTA, Mo. — Many farm acres in Missouri ravaged by floods in 1993 and 1994 are productive today thanks to a 15-ton moldboard plow pulled by four bulldozers.

A St. Charles County excavating company, Aholt & Sons, traveled throughout Missouri and Kansas to deep-plow sand-covered farmland after the 1993 flood. In Ray County, more than 500 people had attended a demonstration of the plow at a farm near the town of Hardin. Mike Strider and son Brian continue to farm the land where the demonstration took place.

MU Extension soybean specialist Bill Wiebold and corn specialist Greg Luce have tracked the plow because of its significant role in the history of Missouri agriculture. They also hoped to tell the story of how farmers restored land so it would remain productive. Luce visited recently with Willie Aholt and his wife, Kathy, at their home in Augusta, Mo.

Willie Aholt, now retired, recalls how the crew plowed about 1,500 acres of flooded farmland in 1993-94. Four D8 and D9 Caterpillar bulldozers pulled a 15-ton single-blade plow that cut 5 feet deep. The bulldozers, linked by cables and chains, pulled the plow to churn up nutrient-rich soil to mix with sand deposits left by floodwaters. Plowing also repaired erosion damage from the flood.

After plowing, the Aholts advised farmers to let fields set before leveling the furrows with a steel beam pulled by a tractor.

Plowing moved at a painstakingly slow pace – usually an acre per hour – at a cost of $560 per acre. Some said it was like buying the farm twice, Aholt says.

Aholt & Sons had bought the plow in 1975 from a neighbor. The family modified it with a massive third wheel for better stability and greater plowing depth.

The cover of the September 1994 issue of Missouri Ruralist magazine shows the plow and dozers at work on Missouri River bottomland in Jefferson City. The state Capitol is visible in the background.

The plow was the last piece of equipment auctioned off when the Aholts sold their farm operation in 2001.

Charles R. “Hap” Post and Norman Post built the first Post Brothers Plow in 1937 to reclaim farmland buried under sand deposited by floodwaters from California’s Santa Ana River. Its enormous carbon steel blade pulled topsoil back to the surface. At that time, the plow rented for $100 per hour. Some used it to cut furrows for drainage ditches and pipelines. In the 1940s, it dug trenches for cables at bomb test sites in Nevada.

Economics of switching from dairy to beef