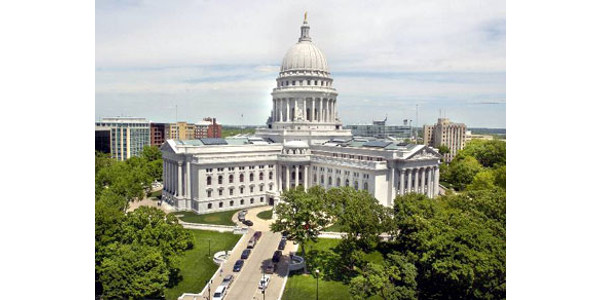 Voting to fire a governor's Cabinet appointee would be an extraordinary move and the latest sign of ongoing tensions between the Republican-controlled Legislature and Evers. (The original uploader was Jeff dean at English Wikipedia. [Attribution], via Wikimedia Commons)

MADISON, Wis. (AP) — Wisconsin’s agriculture secretary was fighting to save his job Monday, calling senators to urge their support while Democratic Gov. Tony Evers’ top aide reached out to Republicans ahead of a highly unusual vote that would result in him being removed from his position.

The Senate was scheduled to vote Tuesday on whether to fire Brad Pfaff from his role as secretary of the Department of Agriculture, Trade and Consumer Protection. He’s held the post since being appointed in January by Evers. Republican Senate Majority Leader Scott Fitzgerald said on Friday that Pfaff didn’t have the votes to be confirmed, which would essentially mean he will be fired, and asked Evers to withdraw the nomination.

Voting to fire a governor’s Cabinet appointee would be an extraordinary move and the latest sign of ongoing tensions between the Republican-controlled Legislature and Evers. No governor has withdrawn a Cabinet appointee and none has been voted down since at least 1987, according to the Legislative Reference Bureau. That is as far back as their records go.

Joel Brennan, Evers’ Department of Administration secretary, said he spoke with Republican senators who were uncomfortable with removing Pfaff and tried to convince them to at least delay the vote if they’re not going to confirm him. He declined to name the senators.

Brennan said ousting a secretary, perhaps for the first time in Wisconsin history, would be a “very dramatic and drastic step.” He promised to “work as hard as we can” to convince Republicans against firing Pfaff. Evers also planned to call Republican senators ahead of the vote, said his spokeswoman Melissa Baldauff.

Republicans control the Senate 19-14. That means at least three Republicans would have to vote with Democrats in order for Pfaff to keep his job.

Wisconsin farmers have been wrestling with a combination of problems over the last few years, including an industry transition toward a factory farm model, falling milk prices and President Donald Trump’s trade war. Nearly 700 dairy farms closed last year in Wisconsin — the highest number of closures since 2011.

Fitzgerald told WTMJ-TV on Sunday that “Brad Pfaff is part of the problem. He hasn’t dealt with this crisis at all.” Fitzgerald said Pfaff had “bungled this job since day one and I know other members of our caucus feel the same way.”

Fitzgerald cited instances when Pfaff clashed with Republican to justify the decision to block his nomination. One of them was his decision to move forward with proposing new siting rules designed to protect farmers’ neighbors from the stench of manure. The new proposals would dramatically expand manure storage facility setbacks from neighbors’ property lines for new farms and current livestock facilities looking to expand.

An advisory committee this spring concluded that existing restrictions in place since 2006 don’t protect residences, schools and other high-use areas from odor. Agriculture officials proposed new plan that called for new farms with at least 500 animals as well as farms looking to expand to at least 500 animals to place manure storage facilities from between 600 feet and 2,500 feet (183 meters and 732 meters) from neighbors’ property lines depending on the size of the herd. The current setback is 350 feet (107 meters).

A coalition of farm advocacy groups sent the agriculture department a letter in September arguing that the approach wouldn’t be workable. Republican state Sen. Steve Nass accused the department of ignoring farmers and promised to do everything he could to block the restrictions.

Agriculture officials have since scaled back the restrictions, proposing setbacks ranging from 350 to 1,450 feet (107 to 442 meters). The department’s board was scheduled to vote on the final version this week. But on Friday, just hours after Fitzgerald said he was going to fire him, Pfaff announced the rules would be pulled from consideration from the Thursday meeting as originally scheduled to “take more time to continue these discussions.” He didn’t mention Fitzgerald’s threat to fire him or offer any other reason why he has delayed the rules.

A coalition of 20 groups, including the state chamber of commerce and groups representing cattlemen, corn growers, cheesemakers, dairy producers, corn and soybean growers and others, sent a letter Friday urging rejection of the proposed rule. Many of those same groups registered in support of Pfaff when a Senate committee considered his appointment. That committee voted unanimously in February to endorse his confirmation as secretary, with all Democrats and Republicans joining together in support.

Pfaff also raised the ire of Republicans when he accused them of abandoning farmers after the Legislature’s GOP-controlled budget committee did not release $200,000 for a farmer mental health program. The committee released the funding in September.