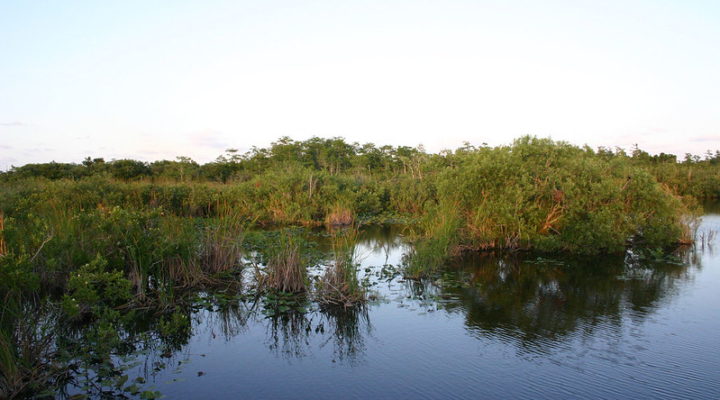 In the south Florida sweltering heat, soil scientists Craig Prink and Martin Figueroa suit up in long-sleeved shirts, long pants, hats, and tightly wrap bandannas around their faces to protect against the sun, water glare, and insects. Heavy gloves and neoprene footwear keep the serrated-edged sawgrass from slicing their skin when they wade through the water. (photo by Kai Schreiber, creative commons/flickr.com)

TALLAHASSEE, Fla. — In the south Florida sweltering heat, soil scientists Craig Prink and Martin Figueroa suit up in long-sleeved shirts, long pants, hats, and tightly wrap bandannas around their faces to protect against the sun, water glare, and insects. Heavy gloves and neoprene footwear keep the serrated-edged sawgrass from slicing their skin when they wade through the water.

They are going out to sample soils in the Everglades and build a map that helps land managers understand resource concerns affecting the ecosystem, water quality, and wildlife. “This is the first digital soil map developed in Florida, on the most important wetland, with the largest acreage in the nation,” said Martin. “How can we restore the Everglades if we don’t know what we are restoring it to? The soil is the basis for everything.”

Unlike their predecessors who struck out on foot, horse, bicycle, and box car, Craig and Martin drive their pickup truck to the water’s edge, load their equipment, and board an air boat. As soil scientists with USDA’s Natural Resources Conservation Service, they still use an auger and probe, just like soil scientists did more than a century ago.

The Everglades is the largest unmapped block of land east of the Mississippi.

Vast tracts of sawgrass marsh span 846,387 acres where they are sampling soils in Water Conservation areas 1, 2, and 3 in the northern section of the Everglades next to the Everglades National Park and Big Cypress National Preserve.

Craig and Martin take turns pulling samples and recording the results. Arriving at a site, Craig hops over the side of the boat into thigh-deep water, probing ahead of each step over the many cracks and holes in the limestone bedrock.

First, he measures the water depth and then pushes the auger about two feet into the soil, carefully pulls it out of the water, and lays it out on the side of the boat. He places golf tees to mark each soil layer, or “horizon,” and pinches off a piece of soil and rubs it to determine the texture and the amount of decomposition of the organic material contained in it.

Martin records their findings: he describes the plant communities and soil properties. He lists the water, soil, and bedrock depth. Bedrock depth often determines the differences between one soil series and another.

Small tree islands punctuate the landscape, nurturing a rich diversity of wildlife, and providing nursery and nesting areas for birds, alligators, and snakes. Tropical hammock island trees anchored to the limestone bedrock are stationary, while tree islands rooted in peat and soil migrate.

The information collected here is vital to efforts to understand how to restore this unique ecosystem. Soil sampling confirms the effect of hydrology on the tree islands and the water-holding capacity of the water conservation areas.

Water depth influences plant communities, with a few centimeters making a difference between what and how vegetation grows. Water flow dictates how much plant material accumulates. The average speed is about one meter per hour. The duration of flooding also affects what grows. Emerged vegetation is found in areas that pond and retain water for longer periods of time during the dry season. Grasses grow in areas that dry out and are slightly higher. Subtropical tree islands with wooded vegetation are in areas that flood in a knoll.

The scope of the project and the need to sample underwater have driven innovation. Martin has put technology to work using a new combination of ArcGIS software. One of the applications helps him build soil-landscape models and another develops a land-surface analysis to map the tree islands and associated vegetation. He began testing the methodology in 2010.

“After years in the field I knew the hydrology and landscape to fully understand if the model was working,” he said.

Craig and Martin are honing new protocols. Out on the boat, they check results against projected models and modify and perfect the process. The new predictions have proven more accurate and consistent, with 75 percent accuracy compared to the national standard of 65 percent.

The new methods have improved their mapping consistency and created displays of the landscape, plants, and water flow.

After taking 1,300 soil samples, in addition to assessing 600 samples provided by other state and federal agencies, Martin and Craig finished mapping the water conservation areas in August. The results will be released in 2021. The Major Series or Soil Classes mapped are Buffalo Tiger, Loxahatchee, Shark Valley, Mack’s Camp, Cooper Town, and Gator Lake.

More than 10,000 soils have been classified since soil scientists began more than a 100 years ago. Most private lands were mapped by 2000.

Preparing for winter weeds in pastures