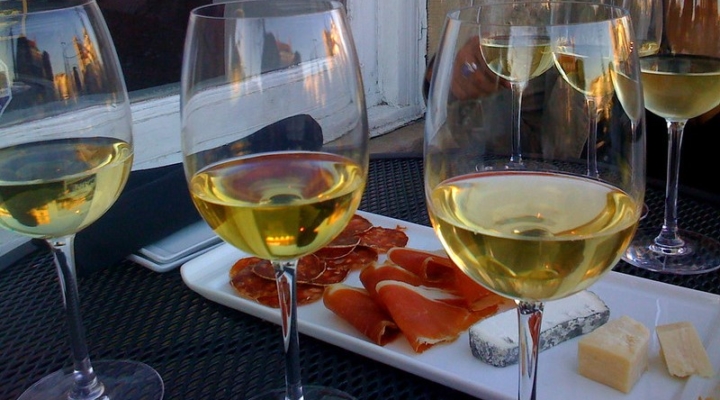 The punitive tariffs take particular aim at European agricultural products that have a "protected name status." Those are goods that can be sold under a name - like Scotch whiskey or Manchego cheese - only if they are from a particular region and follow specific production methods. The result is they fetch premium prices, protect cultural heritage - and are shielded from competitors. (anokarina, Flickr/Creative Commons)

MILAN (AP) — European producers of premium specialty agricultural products like French wine, Italian Parmesan and Spanish olives are facing a U.S. tariff hike due Friday with a mix of trepidation and indignation at being dragged into a trade war they feel they have little to do with.

The tariffs on $7.5 billion on a range of European goods were approved by the World Trade Organization as compensation for illegal EU subsidies to plane maker Airbus.

The U.S. has some leeway in deciding what goods it puts tariffs on. So while it is taxing European aircraft goods an extra 10%, it is walloping agricultural products an extra 25%.

“It’s a nightmare,” says Aurélie Bertin, who runs the 700-year-old winery Chateau Sainte-Roseline in southern France. “We don’t know what will be the result at the end.”

Her rosé wine business has boomed also thanks to Americans’ growing demand for the beverage. She fears her U.S. sales could drop by a third under the new tariffs.

The punitive tariffs take particular aim at European agricultural products that have a “protected name status.” Those are goods that can be sold under a name – like Scotch whiskey or Manchego cheese – only if they are from a particular region and follow specific production methods. The result is they fetch premium prices, protect cultural heritage – and are shielded from competitors.

U.S.-made Parmesan cheese, for example, is not allowed access to the European market as a copycat of the traditional Parmigiano Reggiano and Grana Padano – a barrier that the U.S. milk producers lobby are pressuring to bring down.

Italian President Sergio Mattarella sought to impress on U.S. President Donald Trump during a White House Visit on Wednesday that the result of the tariffs may turn out to be “a mere race between tariffs” after the WTO decides Europe’s case later this year over U.S. subsidies to Boeing. Trump was undeterred.

At home, European producers feel they are collateral damage from a political squabble entirely unrelated to their business.

“We consider that we are hostages of politics. We are very, very far from aeronautics, even if our wines are served on planes every day,” said Burgundy wine producer Francois Labet.

The president of the Parmigiano Reggiano cheese consortium, Nicola Bertinelli, said that its members “are embittered because one of the strongest sectors of our economy is being unjustly hit.” He noted that Italy doesn’t even participate in the Airbus consortium of countries that prompted the penalties.

The four shareholders in Airbus – Spain, France, Germany and Britain – were targeted with more tariffs than other EU countries. Spanish olives, for example, have been singled out, while those from Italy and Greece have been left alone.

That has created additional anxieties, with Spanish olive producers worried that U.S. buyers will turn to buying from Italian companies instead.

The U.S. tariffs appeared to be selectively chosen to hit premium specialty items that well-heeled U.S. consumers could continue to afford even at higher prices – and not sectors that would more directly correlate to the unfair subsidies for Airbus, which could put a damper on the U.S. economy, said Gianmarco Ottaviano, an economics professor at Milan’s Bocconi University.

“We don’t see a lot of tariffs on things that Italy is exporting a lot, like machinery. The reason is that this is probably more useful than Parmesan cheese to the U.S. economy,” he said. “You want to punish, but at the same time, you don’t want to shoot yourself in the foot.”

A tariff is essentially a tax on importers and for small U.S. retailers, they come at a bad time ahead of the holiday season.

U.S. wine retailers, distributors and importers already expect some customers to seek alternatives from countries whose products aren’t being taxed. And any signs that customers are balking at higher prices will force retailers to absorb their increased costs.

The vice president of Italy’s main industrial lobby, Lisa Ferrarini, said that European producers could in the longer-term shift exports away from the U.S. market. But director of the Spanish food and beverage industry director disputes that logic, saying, “there is no alternative to the American market.”

European producers and diplomats were still pressing for a last-minute change of heart using all available channels, from social media to diplomacy.

Italy’s agriculture minister, Teresa Bellanova, tweeted a photo to Trump promoting grapes and Italian Parmesan as a healthy snack, and the president of the Emilia Romagna region, where much of the cheese is produced, has launched a social media campaign in support of the product.

France’s finance and economy minister, Bruno Le Maire, will make another attempt to soften the tariff blow when he meets with U.S. trade negotiator Robert Lighthizer in Washington on Thursday. Le Maire told Europe 1 radio he will warn Lighthizer that Europeans would strike back if the tariffs take effect on Friday.

“We, Europeans, will take similar sanctions in a few months, maybe even harsher ones – within the framework of the WTO – to retaliate to these US sanctions,” he said.

Parker reported from Paris. Daniel Cole in Marseille, France, and Joyce M. Rosenberg in New York contributed to this report.