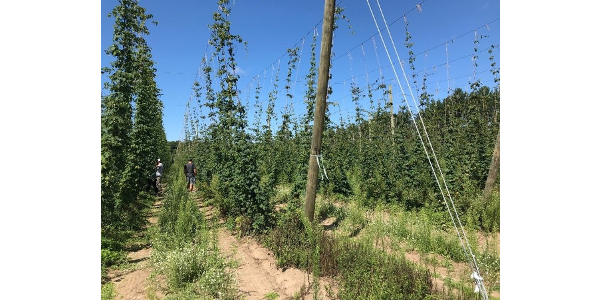 EAST LANSING, Mich. — European corn borer (Ostrinia nubilalis) has been a minor pest of hop in Michigan over the last decade. Other Midwestern states have reportedly experienced more substantial damage from this introduced moth. Unfortunately, damaging levels of European corn borer larvae are present in some Michigan hopyards this year (2019). While it is unknown exactly what has caused the outbreak, it is possible that unusual weather patterns this spring that delayed planting of its major crop host (corn) made hop an attractive alternative egglaying site for the moth.

According to the USDA National Agricultural Statistics Service (NASS) Michigan Crop Weather progress reports, by the end of May only 33% of corn planting was completed compared to a 73% five-year average. Additionally, according to the Farm Service Agency almost 240,000 acres of Michigan corn acreage was submitted for preventive planting coverage (i.e., never planted) due to wet field conditions.

European corn borer completes one to two generations per year in Michigan with populations in colder areas completing a single life cycle and populations in warmer regions completing two. The geographic distribution of single and multi-generation populations, and their area of overlap, is not well defined in Michigan as reliable and widespread trapping data is not available.

European corn borer overwinters in the larval stage; pupation occurs in spring as temperatures warm. The first flight of moths is expected at 450 growing degree days (GDD) base 50, based on a March 1 start date for GDD accumulation. This first flight of adult moths continues for 500 GDD (through 950 GDD base 50) with females laying 200-500 eggs over a period of two to three weeks. Development is driven primarily by temperature, but eggs hatch in approximately 12 days and then larvae feed externally on leaves for approximately seven days before boring into stems and petioles where they continue development.

Once inside the plant, observations in hop indicate that European corn borer larvae damage vascular tissue, disrupting the flow of nutrients and water and impeding plant development. This summer, damage to the vascular tissue in hop appears to have occurred in June before bines reached the top wire and affected the critical sidearm and cone development stages, greatly reducing yield and likely quality.

According to the Michigan State University Enviroweather European corn borer model, the first adult flight and egglaying period in Michigan was estimated to have occurred between June 8 and July 5 in the southern tier of counties, and June 21 and July 17 in the northwest. In single generation locations, the larvae generated from this first flight of adult moths will overwinter. In warmer locations, larvae from the first generation pupate and a second adult moth flight and egglaying cycle occurs between 1,450 and 1,950 GDD base 50. In areas where both one and two generation corn borer co-exist, emergence and development may overlap or occur in succession, making scouting and management difficult.

Growers can scout for eggs, larvae and pupae. European corn borer eggs are smaller than the head of a pin but are laid in visible groupings. Eggs are white when first laid but change to yellow and then develop a black spot (the larval head capsule) just before hatching. Eggs are likely deposited on the underside of hop leaves in masses of 20 to 30 and covered with a waxy film.

European corn borer larvae are light gray to faint pink caterpillars with a dark head and have dark spots along the sides on each segment and a pale stripe along the back. They grow to about 1 inch but start out very small at hatch and feed briefly on leaf tissue before boring into hop bines, and even hop leaf petioles.

European corn borer pupae are smooth, reddish brown, cylindrical and about a half-inch long and found inside bines.

The European corn borer moth is about 1 inch long and light brown with wavy bands across the wings. The male is slightly smaller and darker. The tip of the body protrudes beyond the wings. Adult moths are most active in grassy areas before dawn.

Symptoms of damage from European corn borer on hop appear as generalized stunting and in some cases wilt. Plants fail to thrive and may lose their ability to climb the coir. Check for stem wounds along bines, particularly where sidearms originate or bines contact each other or the coir. The larval frass (feces) appears a little like sawdust, about the size of large sand grains and is trapped in webbing. You may also see holes or wounding. If you cut open the bines where borer is suspected, you will see discolored tissue, frass and likely the larvae itself.

Monitoring for adult flight is critical to properly timing the start of pesticide application to control European corn borer as small larvae are the intended target of insecticides. Unfortunately, simple wing or bucket traps used for other field crops moths cannot be used to trap European corn borer; instead, wire Hartstack or cloth Heliothis traps are used. These traps are cumbersome and expensive and must be positioned carefully in action sites (grassy locations where European corn borer gather to rest and mate).

Begin monitoring and trapping before predicted flight. Consider establishing a trapping and monitoring system with neighboring hop or corn growers to limit the workload on any one individual farm. In lieu of trap data, careful crop scouting based on the Enviroweather prediction modelcan be used as a loose guide. Also, work with neighboring corn growers to monitor their crop for egg masses as an indication of risk.

There are a number of effective insecticides for managing European corn borer and they should be applied to control adults preventing egglaying and kill larvae before they enter the protection of the bine. Based on research in peppers and the available pesticides to hop producers, it is likely that spinosad-based insecticides will provide the best control of European corn borer in hop. Registered spinosads for hop growers in Michigan currently include Entrust, Entrust SC and SpinTor 2SC.

Products containing cyfluthrin (Tombstone, Tombstone Helios) will also likely be effective though more disruptive to natural enemies, increasing the risk of twospotted spider mite pressure. Bacillus thuringiensis (Bt) products may also be used to target small, newly hatched larvae before they enter the protection of the bine. All of these products should be targeted to control larvae as they emerge from eggs, once inside the bine insecticides will be ineffective. Scout to identify the current active life stage before making management decisions.

Growers with substantial infestations should carefully dispose of crop waste including chopped bines at the picking line. Consider burying or hot composting crop debris both from the processing line and the field to limit carryover into the next season.

Managing for European corn borer takes a multipronged approach including careful monitoring and targeted pesticide applications. A regular schedule of insecticide applications based on insecticidal residual activity should be maintained from the beginning of egg hatch until two weeks before harvest or when larvae are no longer detected. For more information on European corn borer, refer to the Iowa State University publication, “European Corn Borer – Ecology and Management and Association with other Corn Pests.”

Information presented here does not supersede the label directions. To protect yourself, others and the environment, always read the label before applying any pesticide. Although efforts have been made to check the accuracy of information presented, it is the responsibility of the person using this information to verify that it is correct by reading the corresponding pesticide label in its entirety before using the product. Labels can and do change. For current label and MSDS information, visit one of the following free online databases: greenbook.net, cdms.com and agrian.com. The efficacies of products listed have not been evaluated on hop in Michigan. Reference to commercial products or trade names does not imply endorsement by Michigan State University Extension or bias against those not mentioned.

Want to receive more pest management information for hop this season? Sign up to receive the MSU Extension Hops & Barley Newsletter or follow us on Facebook.

This material is based upon work supported by the USDA NIFA under Award No. 2017-700006-27175. Any opinions, findings, and conclusions or recommendations expressed in this publication are those of the author and do not necessarily reflect the view of the US Department of Agriculture.

Scientists bolt down the defenses against ambrosia beetles
January 13, 2020