Subscribe
Home / National / EU to settle WTO dispute with the US 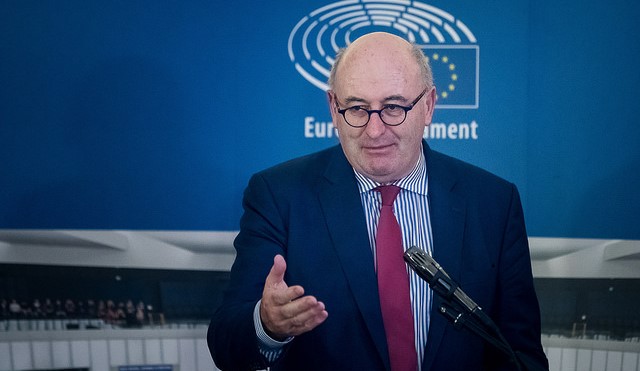 BRUSSELS — The Member States of the European Union adopted today the Commission’s proposal for a mandate to discuss with the United States the review of the functioning of an existing quota to import hormone-free beef into the EU.

This decision by the Council enables the Commission to engage with the United States in a formal negotiation.

Commissioner for Agriculture Phil Hogan said: “I welcome the strong backing from EU Member States, which is an essential step to move forward on this beef trade matter. Following this approval, we can start negotiating with the United States to address some concerns they raised on the functioning of the quota and contribute to a mutually satisfactory outcome. By engaging in this process without delay, the EU shows its commitment to bring about a new phase in the relationship with the United States, in line with the agreement reached between Presidents Juncker and Trump in July. I also want to reiterate that this negotiation will not entail any changes to the level of the existing quota or the quality of beef imported into the EU. The Commission will of course keep Member States informed all along the negotiating process.”

The Commission, on behalf of the European Union, will engage in negotiations with the United States in the coming days. In due course, the Commission will also be in contact with other countries supplying under the quota, as necessary and in line with the applicable World Trade Organisation (WTO) rules.

In 2009, the European Union and the United States concluded a Memorandum of Understanding (MoU), revised in 2014, which provided for an interim solution to a longstanding WTO dispute regarding the use of certain growth-promoting hormones in beef production. Under the agreement, a 45,000 tonnes quota of non-hormone treated beef is open by the EU to qualifying suppliers, which include the United States.

The review of the MoU was requested by the previous US Administration in 2016 and the two sides have since then discussed the US concerns on the implementation of the MoU on a regular basis. The negotiation mandate intends to address these concerns and to find a mutually satisfactory solution in line with WTO rules.