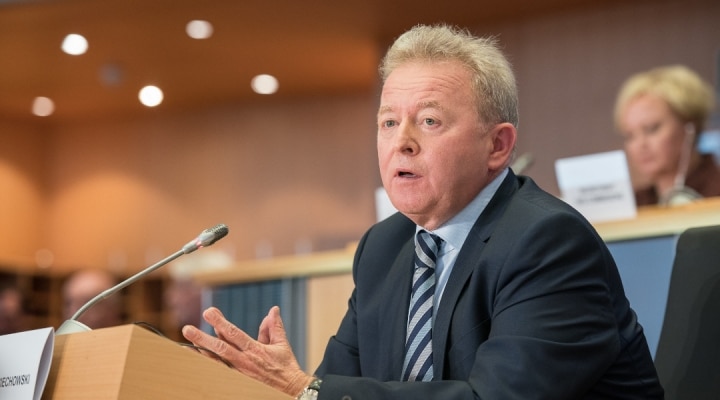 “The EU is an agricultural superpower, and we will ensure that our farmers have the commission’s full support to respond to the global needs for food,” Agriculture Commissioner Janusz Wojciechowski said. “We will do this while working towards making our food supply chains more resilient and sustainable to future crisis.” (European Parliament, Flickr/Creative Commons)

BRUSSELS (AP) — The European Union’s executive arm on Wednesday proposed an aid package of 500 million euros ($549 million) to help food producers in the 27-nation bloc weather the economic impact of the war in Ukraine.

With Russia and Ukraine providing about 30% of the world’s wheat, the conflict between the neighboring nations has led to higher food prices globally and already rising production costs.

Fertilizer prices had risen substantially before the war started last month. EU officials are worried the war will cause energy prices to surge and put farmers under more pressure by further impacting fertilizer costs.

The European Commission said the proposed aid would be distributed in national allocations. The commission’s plan also would authorize EU countries to supplement the bloc’s support by up to 200% through their own contributions, which could generate another 1 billion euros.

To increase agricultural production capacity within the EU, the commission proposed to temporarily allow the farming of any crops for food and feed purposes on fallow land, while maintaining greening payments for farmers at their full level.

“The EU is an agricultural superpower, and we will ensure that our farmers have the commission’s full support to respond to the global needs for food,” Agriculture Commissioner Janusz Wojciechowski said. “We will do this while working towards making our food supply chains more resilient and sustainable to future crisis.”

While the EU does not face an immediate food shortage, the region is a net importer of specific commodities, including feed crops from Ukraine. And European farmers are highly dependent on Russian fertilizers to grow their crops.

“This vulnerability, together with high input costs, such as fertilizers and fossil energy, is causing production challenges for farmers and risks driving up food prices,” the commission said in its proposal.

The 500 million euros in aid would come from a 2022 budget reserve that was included in case of a major crisis in the agriculture sector. The European Parliament and the European Council, which comprises the leaders of EU members, need to agree to the transfer of money for the package to take effect.

Among other measures to help farmers, the commission proposed an aid program for the pork industry and temporary state aid of up to 35,000 euros for companies in the agriculture and fisheries sectors.

In parallel, the commission said it is deeply concerned about the dire food situation in Ukraine’s besieged cities. The bloc has devised a support plan of 330 million euros to help the war-torn country, whose forthcoming harvest is under threat and food stocks endangered by Russia’s invasion.

“We will continue to provide humanitarian aid to alleviate the suffering of Ukrainians by securing their access to basic goods and services, notably food. At the same time, we need to avoid any export restrictions to keep a lid on food prices,” the commission’s executive vice president, Valdis Dombrovskis, said.