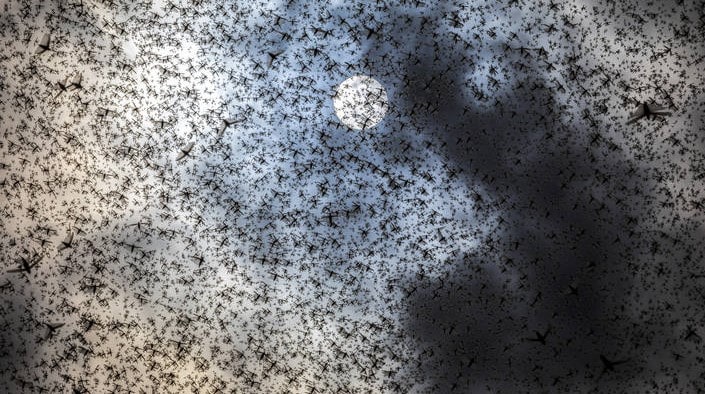 BRUSSELS/ROME — FAO Director-General QU Dongyu today welcomed an € 11 million contribution from the European Union as the UN agency steps up efforts to fight the Desert Locust upsurge which has now spread from East Africa to the Persian Gulf.

“I want to thank the European Union for its generosity and support as the Desert Locust threatens to provoke a humanitarian crisis in East Africa,” Qu said.

The Director-General said the situation was extremely alarming in a region where 20 million people were already considered food insecure.

The locust outbreak is the worst in Ethiopia and Somalia for 25 years and the worst infestation that Kenya has experienced in 70 years. Djibouti and Eritrea have also been affected while swarms have been reported in South Sudan, Uganda and the United Republic of Tanzania.

This week there was a new development as strong winds brought swarms of Desert Locusts to both sides of the Persian Gulf to Bahrain, Kuwait and Qatar reaching as far as southwest Iran.

“We must urgently scale up action to protect rural livelihoods and assist farmers and their families,” Qu said. “There is no time to waste.”

The Desert Locust is considered the most destructive migratory pest in the world and a small swarm covering one square kilometer can eat the same amount of food in one day as 35,000 people.

FAO has appealed for $138 million in urgent funding to assist the countries that have been impacted. So far only $52 million has been received.

The Director of the FAO Liaison Office in Brussels, Rodrigo de Lapuerta Montoya, gave an update on the  upsurge to the Working Party on Humanitarian Aid and Food Aid of the Council of the European Union last week. The Member States expressed their concern about the situation and confirmed their commitment and trust in FAO’s work.

“It is an extreme situation,” Burgeon said. “We have a window of opportunity to bring this under control.” FAO’s Desert Locust Information Service says the situation will be further exacerbated by new infestations expected in the coming months.

Pasture and croplands have already suffered damage in Djibouti, Eritrea, Ethiopia, Kenya and Somalia, and there are potentially severe consequences for the region where millions rely on agriculture and livestock rearing for their survival. If favourable weather conditions continue, as expected, needs will grow.

FAO is already on the ground helping governments and other partners with surveillance and coordination, technical advice and the procurement of supplies and equipment.

The UN agency is also preparing action to protect rural livelihoods by providing affected growers with farming packages, veterinary care for vegetation-starved livestock, and cash for families who have lost their crops so that they can purchase food.

Desert Locust monitoring, forecasting and control are at the heart of FAO’s mandate. Its Desert Locust Information Service has been in operation for nearly 50 years. FAO’s well-established field presence, ability to link up authorities from different countries, and expertise in Desert Locust management make it a key player in responding to upsurges like that currently affecting East Africa and the Red Sea area.