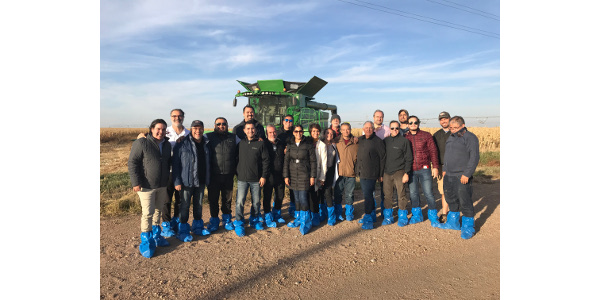 The trade delegation in Nebraska this week represented different facets of the Mexican ethanol industry. (Courtesy of Nebraska Corn Board)

LINCOLN — A delegation of 19 industry leaders from Mexico were in Nebraska last week to gain a better understanding of the U.S. ethanol sector. From Oct. 16-18, the delegation toured all facets of Nebraska’s ethanol industry, from cornfield to fuel retailer.

On the first day of their trip, the group was provided with an overview of Nebraska’s agricultural and ethanol industries before they traveled to Giltner and visited Hunnicutt Farms. At the farm, the team learned about corn, seed corn, popcorn and soybean production. Through the discussions, the delegation was introduced to cutting-edge technologies in American agriculture and were able to better understand how some farmers utilize irrigation equipment.

“By bringing this group onto our farm, we’re able to really lay the foundation and show how renewable ethanol is and how easy it is to incorporate into a nation’s fuel supply,” said Brandon Hunnicutt, vice-chairman of the Nebraska Corn Board and co-owner of Hunnicutt Farms. “Also, by bringing trade teams to farms and to ethanol plants, we’re able to build relationships with our customers that hopefully develop into long-term partnerships. I like to think the U.S. is the best in the world when it comes to corn and ethanol production. We’re open for business and want to share our products with the world.”

During the remainder of the group’s visit to Nebraska, they toured Chief Ethanol, an ethanol processing plant in Hastings, Magellan Midstream Partners, a fuel pipeline, storage and transportation company in Doniphan, and Bosselman’s Travel Center, a fuel retailer in Grand Island. They departed the state Friday morning after meeting with Gov. Pete Ricketts, Steve Wellman, director of the Nebraska Department of Agriculture and Kelly Brunkhorst, executive director of the Nebraska Corn Board.

“In times when there’s so much uncertainty in regards to trade, it’s great to have our top customers visit to remind them how much we value their business,” said David Bruntz, chairman of the Nebraska Corn Board and farmer from Friend. “Mexico is our No. 1 customer when it comes to corn and distillers grains, and there is so much potential for increased ethanol exports. We are glad to have had time with this delegation to show appreciation for their past business, answer questions about our corn and ethanol industries and to let them know we’re working hard to ensure the passage of USMCA.”

The visit from the Mexican delegation was an offshoot of an even larger event held earlier in the week. The first-ever Global Ethanol Summit occurred Oct. 13-15 in Washington, D.C. Government officials and industry leaders from 60 countries attended this event to learn about the benefits of expanding global ethanol use. The event was organized and hosted by the U.S. Grains Council, Growth Energy and the Renewable Fuels Association.