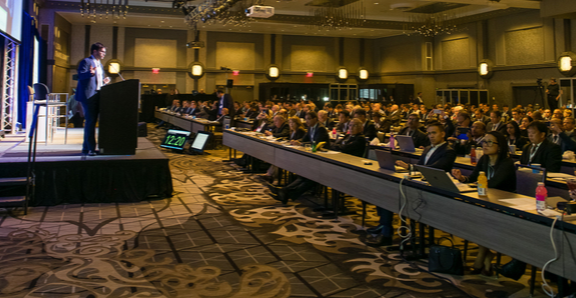 Attendees from more than 60 countries discussed the benefits of expanded global use of ethanol on Monday during the first full day of the Global Ethanol Summit. (Courtesy Photo)

WASHINGTON — Delivering on the potential that could be captured from expanded global use of ethanol took center stage on Monday during the first full day of the Global Ethanol Summit, an event with attendees from more than 60 countries, sponsored jointly by the U.S. Grains Council (USGC), Growth Energy and the Renewable Fuels Association (RFA).

“In the last 18 months, 11 markets – nearly all in which the Council has active ethanol engagement – made announcements of new or updated ethanol policies with a role for trade,” said Ryan LeGrand, USGC president and CEO, who delivered a keynote address that was translated into nine languages for attendees.

“All of us are united by the goal of finding transport energy solutions to make our environmental and human health commitments a reality while also making economic sense. Our presence in Washington, D.C., this week is a testament to the fact that we are collectively concerned about the long-term health of our citizens and the environment and recognize the real economic opportunity that’s available through greater adoption of ethanol.”

The meeting began with a pulse-check on U.S. ethanol supply and demand including a rundown of policy drivers that could affect the outlook for the commodity, including calls by an increasing number of nations to identify permanent solutions for climate change, cleaner air, improved health and less expensive fuel.

Case studies from Brazil and Canada, the two largest markets for U.S. ethanol, were employed to highlight existing ethanol realities and new benchmarks for the environmental benefits it can provide. Additional input from the European Union’s experience with ethanol rounded out the morning sessions.

The afternoon included two panels focused on the chemical properties and societal impacts of ethanol use, as well as experiences with ethanol in India and Nigeria. Speakers addressed the intersection between biofuels use and electrification of transport fleets as well as the benefits specifically to women and children of ethanol for cooking fuel.

Miguel Ivan Lacerda Oliveira, director-biofuels for Brazil’s Ministry of Mines and Energy, underscored the benefits outlined by the day’s presenters, saying, “The future is ethanol, and why is that? Because there is no future outside of ethanol.”

In his comments, LeGrand emphasized that the Council and its partners in ethanol export market development are poised to help the attendees from more than 60 countries who are considering expanded ethanol use operationalize their plans.

“My hope for you is that no one walks away from this meeting wondering if ethanol will work for your country,” said LeGrand. “The answer, as we hope to show, is yes.”

The Global Ethanol Summit continues tomorrow with a scheduled address by U.S. Department of Agriculture Deputy Secretary Stephen Censky who will speak about global collaboration and trade of ethanol.