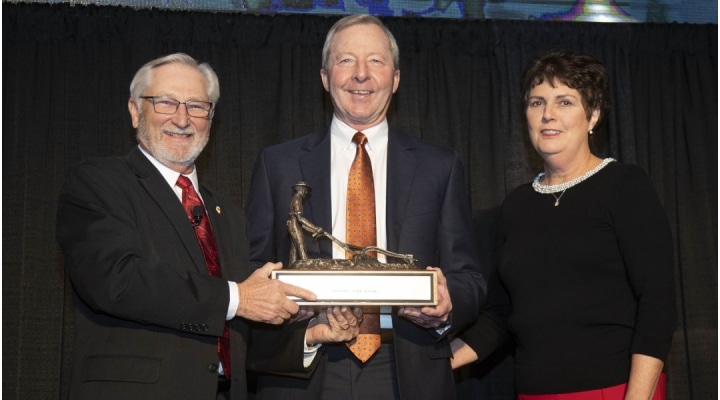 CHICAGO — David Erickson has been awarded the 2021 Illinois Farm Bureau (IFB) Charles B. Shuman Distinguished Service Award. The award, the highest given by IFB, was presented during the organization’s annual meeting in Chicago, Dec. 4-7.

Erickson is best known for his leadership roles in agricultural associations at both the state and national level. The Knox County farmer has been honored for his contributions to Illinois Farm Bureau, having served as vice president of the organization from 2014-2017.

Prior to his election as vice president, Erickson served on the Knox County Farm Bureau board of directors from 2009-2014, and as president from 2012-2014. Additionally, he has been involved with the Illinois FFA as secretary-treasurer and as chairman of the Illinois FFA Foundation.

In 2005, Erickson earned the American FFA Degree and received the State 4-H Alumni Recognition Award from Illinois 4-H. In 2003, he was named Master Farmer by Prairie Farmer and Farm Progress Publications and provided advice as a Profit Planner Panelist for Prairie Farmer Magazine.

An active community member, Erickson is an avid volunteer in the Immanuel Lutheran Church of Altona. He has held numerous leadership roles in his community, including past director of the Oneida Telephone and Cablevision Companies, the Knox County Zoning Board of Appeals and past chairman of the Galesburg Cottage Hospital Board of Trustees. He also served on the board of directors for Midwest Bank of Western Illinois, Unit #10 Extension Council and the Knox County Board. Erickson is currently the vice president of the Galesburg Community Foundation and serves on numerous committees for the organization.

Erickson and his wife, Nancy, farm and operate a farm management business. They have one son, Adam. Erickson is a graduate of Western Illinois University with a B.S. in agricultural education. He taught vocational agriculture and was an FFA Advisor for four years before beginning his farming career.

The Distinguished Service Award provides an opportunity for Illinois Farm Bureau to recognize an individual who has given a lifetime of exemplary leadership and service to agriculture to a major segment of the state and/or nation. This award honors the memory and service of Charles B. Shuman, a revered Moultrie County farm leader who served as president of both IFB and of the American Farm Bureau Federation.