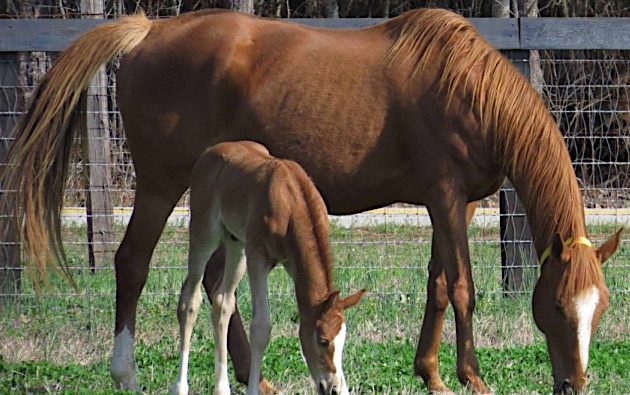 Three horses have been confirmed positive for infectious anemia (EIA), the first such infection in a South Carolina animal since a donkey in Aiken County acquired the disease in 2014, State Veterinarian Michael Neault said. The first case was in a quarter horse in Berkeley County and the two contact quarter horse cases were in Barnwell County. (photo by Clemson University)

CLEMSON, S.C. — Three horses have been confirmed positive for infectious anemia (EIA), the first such infection in a South Carolina animal since a donkey in Aiken County acquired the disease in 2014, State Veterinarian Michael Neault said. The first case was in a quarter horse in Berkeley County and the two contact quarter horse cases were in Barnwell County.

The blood-borne illness does not infect humans but is potentially fatal to horses and other equine species. The virus that causes EIA is often transmitted by bloodsucking insects like biting flies but also can be introduced by infected needles or other medical, dental or tattoo equipment.

“This is a very serious disease,” Neault said. “There is no treatment for EIA, so if an infected animal does not die from the disease it will become a lifelong EIA carrier and serve as a reservoir for the disease, putting other equines at risk. For this reason, they must be permanently isolated and quarantined or euthanized.”

LPH encourages equine owners to have an annual Coggins test — a blood test that screens for EIA antibodies — performed on their horses even if the animals don’t leave the farm. That is especially important if they are housed at a boarding facility, said Sean Eastman, LPH Field Services director.

State law requires a negative Coggins test any time horses cross state lines and when owners take their horses to in-state gatherings of animals belonging to more than two horse owners — such as trail rides, horse shows or competitions. Owners should bring Coggins test documents with them when traveling with horses.

EIA is a reportable animal disease in all 50 states, meaning that positive cases must be reported by the testing laboratory to local state or federal animal health officials within two days of discovery. LPH maintains an animal reportable diseases list online at: www.clemson.edu/public/lph/ahp/reportable-diseases/.

“All these diseases pose a significant health threat and are communicable to other animals,” Neault said. “Thankfully we have effective equine vaccinations available against deadly diseases like Eastern Equine Encephalomyelitis, West Nile Virus and rabies. So it’s a good idea for horse owners to plan a regular Coggins test just like they do their animals’ annual vaccinations.”

Clinical signs of EIA vary and it is often hard to differentiate EIA symptoms from those of other diseases. The incubation period for the disease can range from a week to 60 days or longer.

An acute case can range from fever and decreased appetite to severe anemia and sudden death. More severely affected horses may have weakness, depression and additional signs that may include jaundice, rapid breathing or heart rate, swelling of limbs, thrombocytopenia, red or purple spots on mucous membranes, bleeding from the nose or blood–stained feces. Anemia can occur, although it is more likely to be severe in chronically infected animals.

Tips from the USDA Animal and Plant Health Inspection Service to prevent infection and spread of EIA include:

Clemson University Livestock Poultry Health, based in Columbia, is part of Clemson University’s Public Service and Agriculture unit. Its mission is to protect animal health by controlling endemic, foreign and emerging diseases in livestock and poultry and to protect the health of South Carolina consumers by inspecting meat and poultry products to ensure they are safe, wholesome and accurately labeled.