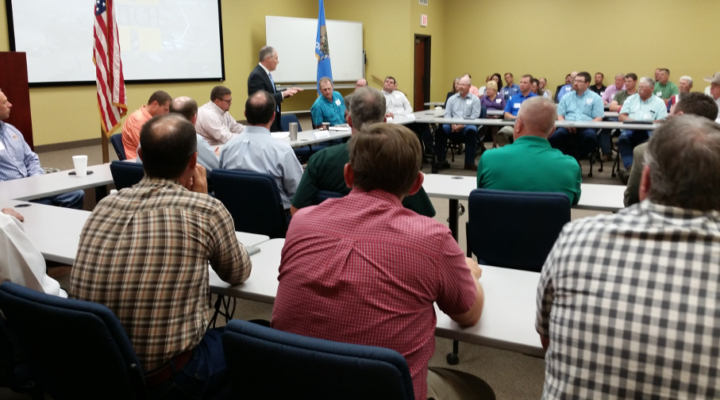 EPA Administrator Scott Pruitt met with local area farmers from Oklahoma, Texas and Kansas to discuss the repeal and clarification of the 2015 Waters of the United States Rule (WOTUS). (Courtesy Photo)

GUYMON, Okla. — On July 27th in Guymon, Okla., EPA Administrator Scott Pruitt met with local area farmers from Oklahoma, Texas and Kansas to discuss the repeal and clarification of the 2015 Waters of the United States Rule (WOTUS).

With the February Executive Order to revise or rescind the 2015 Waters of the United States Rule, newly appointed EPA Administrator Scott Pruitt is taking strides to clarifying this rule by sitting down with agriculturalist across the country to hear their concerns. Administrator Pruitt has traveled to over 15 states, and appeared for a town hall meeting in Guymon, Oklahoma.

More than 90 local farmers and ranchers from the surrounding area attended this town hall meeting Thursday (July 27) at the Hitch Enterprise Annex building.

Administrator Pruitt opened the meeting by sharing his plan for the Environmental Protection Agency and the direction he sees the agency going in the next four years. He is focusing on the process of hearing the concerns of the people and taking this into consideration before making a final discussion. A key item on Administrator Pruitt’s agenda is clarifying the 2015 WOTUS Rule.

“As we do rule making, as an agency, it’s our job to hear from you,” said Administrator Pruitt. “The last time this rule [2015 WOTUS Rule] was adopted this didn’t happen. This dialogue is very important to us.”

After remarks from Administrator Pruitt, the floor was opened for questions. Several area farmers welcomed the Administrator and voiced their approval of the work that he has and is doing in the few short months he has been at the agency.

The topic of conversation was focused around WOTUS and how can Administrator Pruitt and his team can better clarify the rule in the lawmaking process later this year. Pruitt’s goal is for the replacement definition to be finalized by the end of the first quarter in 2018.

Several questions were asked requesting that the definition be kept simple and they define what is and is not considered Waters of the United States. Administrator Pruitt expanded on several questions as well as many of his staff about where they are at in the lawmaking process with this revised ruling.

“This agency going forward is going to make sure we get it right,” said Administrator Pruitt. “But at the end of the day, we trust you and we know that you are a partner in the process.”

The Administrator said that agriculturalists are the original conservationist. Jerry Wiebe, farmer in Texas County and water pioneer, helped organize and plan this meeting along with Jason Hitch, owner of Hitch Enterprises. Wiebe has been faming in Texas County for over 50 years, with an emphasis on water conservation.

“Clarification of this rule will give us a base line moving forward,” said Wiebe. “We’ll know that what is put into place today, we can count on and rely on in the future.”

Wiebe looks forward to the revision of the rule and is thankful for the Administrator taking the time to come and speak one-on-one with producers.

Kyle Hilbert, Oklahoma State Representative for District 29, is excited for the benefits that this will bring Oklahoma farming and ranching.

“This is something that will bring about long lasting change,” said Representative Hilbert. “To have the definition of Waters of the United States back to its original intent will be huge not only for Oklahoma but for the United States.”

Administrator Scott Pruitt is continuing to speak to producers across the country and is adamant about hearing the voice of the people, not only on this ruling but also over every issue or decision that is made.