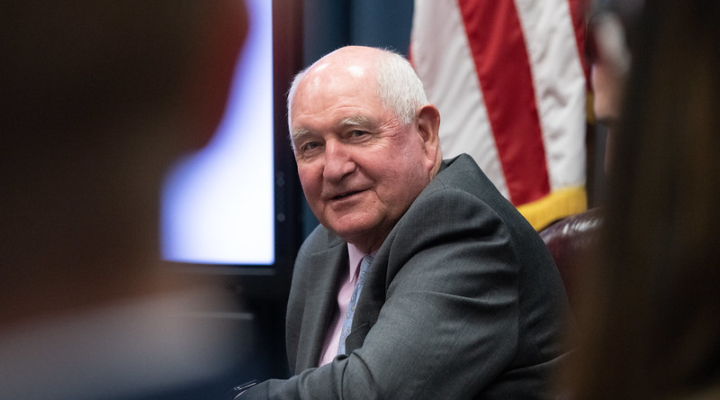 "Building on the success of the year-round E15 rule, this forward-looking agreement makes improvements to the RFS program that will better harness the production of our farmers and ensure America remains energy dominant," said USDA Secretary Sonny Perdue. (U.S. Department of Agriculture, Public Domain)

“President Trump’s leadership has led to an agreement that continues to promote domestic ethanol and biodiesel production, supporting our Nation’s farmers and providing greater energy security,” said EPA Administrator Andrew Wheeler. “Today’s agreement is the latest in a series of steps we have taken to expand domestic energy production and improve the RFS program that will result in sustained biofuel production to help American farmers.”

“President Trump has once again demonstrated that he is a champion for our nation’s farmers and rural America,” said USDA Secretary Sonny Perdue. “The President recognizes that American farmers are the most productive in the world, and he has found a way to pursue policy that promotes economic growth and supports our producers. Building on the success of the year-round E15 rule, this forward-looking agreement makes improvements to the RFS program that will better harness the production of our farmers and ensure America remains energy dominant.”

Under this agreement, the following actions will be undertaken by EPA and USDA:

Since taking office in 2017, the Trump Administration has enacted tax and regulatory policies that have helped make America energy dominant. The Administration has cut burdensome red tape through deregulation, including signing a record number of Congressional Review Act (CRA) legislation, repealing the Waters of the United States (WOTUS) rule, reforming the Section 401 process under the Clean Water Act, proposing a new methane rule, and removing the U.S. from the job-killing Paris Climate Accord. The Administration has also expedited permitting approvals, has opened up federal land for development, including the Arctic National Wildlife Refuge (ANWR), and will continue to enact pro-growth energy policies to expand American energy dominance.

“This is great news for Iowa and rural America. President Trump is following through on his commitment to our nation’s hardworking farmers and biofuels producers. The RFS is essential to the livelihoods of folks across our state, which is why I’ve been fighting tirelessly on behalf of Iowa’s farmers and producers every step of the way and making Iowans’ voices heard throughout this process,” said Senator Joni Ernst (IA). “Our message was clear: uphold the RFS—15 billion means 15 billion. The president heard that message and has acted on it. The steps outlined today by the administration will help increase demand for our biofuels, provide certainty for farmers and producers for years to come, and ensure that EPA is implementing the RFS as it was written.”

“President Trump listened to the concerns of farmers and biofuels producers and delivered on their behalf… The solution outlined by President Trump, Administrator Wheeler and Secretary Perdue is exactly how the RFS is meant to function according to the law as written by Congress… Maintaining the integrity of the RFS, repealing WOTUS and allowing year-round sales of E15 will all help American agriculture and the rural economy. These are promises made and promises kept by President Trump,” said Senator Chuck Grassley (IA). “President Trump has made clear that he is an ally of corn and soybean farmers as well as ethanol and biodiesel producers. He is fighting for the farmer. This announcement is great news for Iowa, the Midwest and the entire country.”

“In my discussions with the president, I fought hard for a fair deal for Nebraska’s farmers and ethanol producers,” said Senator Deb Fischer (NE). “I thank the president for following through on his commitment to rural America. Today’s announcement means more certainty for families, businesses, and communities across the Good Life.”

“Ensuring RVOs do not go below 15 billion gallons and expanding access to E15 will bolster the RFS and ethanol production at a critical time for our nation’s rural economy, which has been suffering from low commodity prices,” said Governor Pete Ricketts (NE). “Thank you to President Trump for taking these important steps for ethanol and our great farm families!”

“I want to thank the President for working with me to bring parity to farmers in my district, and the ethanol industry as a whole, by addressing the issue of small refinery exemptions,” said Congressman Rodney Davis (IL-13). “I recently introduced the bipartisan Small Refinery Exemption Fairness Act to address this issue and reobligate gallons lost to these exemptions, and I look forward to seeing the details of this plan that will put us on the right path forward.”

“This announcement comes at a time when Illinois ethanol producers needed a big win,” said Congressman Mike Bost (IL-12). “By maintaining the 15 billion gallon baseline and increasing access to E15, President Trump has shown he is working for American agriculture. Farmers across Illinois’ 12th District will be pleased with this announcement and the security it provides for the Renewable Fuel Standard.”

“This is welcome news for Iowa’s farmers and the renewable fuels industry,” said Iowa Secretary of Agriculture Mike Naig. “President Trump listened to our producers’ concerns and took action to address them. This is what happens when farmers, biofuels producers and government leaders work together to make our voices heard. We are grateful to President Trump for directing EPA to uphold the intent of the Renewable Fuel Standard, and we look forward to working with EPA and USDA to implement today’s announcement. As the number one producer of ethanol and biodiesel in the country, Iowa is proud to lead the nation in reducing our dependence on foreign oil. We will continue to work to restore and build demand for these critical markets for Iowa agriculture.”

Background on the Renewable Fuel Standard: Congress passed the renewable fuel standard (RFS) program to reduce greenhouse gas emissions and expand the nation’s renewable fuels sector while reducing reliance on imported oil. This program was authorized under the Energy Policy Act of 2005 and expanded under the Energy Independence and Security Act of 2007. In addition to the goals of increasing production of home-grown renewable fuels, the program supports domestic demand for farm commodities, increases farm income, and creates rural jobs.