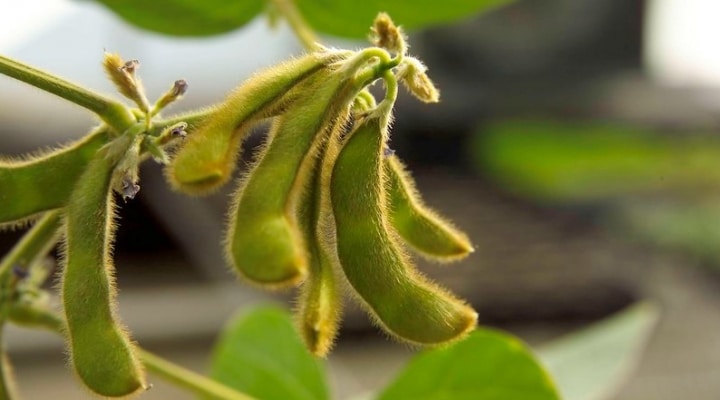 Dicamba, which has been sprayed since the 1960s, has skyrocketed in use in recent years, after Monsanto introduced new genetically modified soybean and cotton seeds that could withstand being sprayed by the herbicide. (Stock photo via United Soybean Board, Flickr/Creative Commons)

CHAMPAIGN, Ill. (AP) — The U.S. Environmental Protection Agency defended its decision to allow farmers to continue to spray a recently banned herbicide through July 31 in a court filing on Tuesday evening. The agency argued that it has the power to regulate existing stocks of herbicides that have been canceled.

“EPA fully complied with the Court’s June 3, 2020 decision vacating three pesticide registrations for dicamba-based pesticide products,” the filing read. “These products remain unregistered. EPA has not taken any action to revive the registrations.”

The Ninth Circuit Court of Appeals banned dicamba, a volatile weed killer that has damaged millions of acres of crops and natural areas in recent years, on June 3, ruling that the EPA did not have enough evidence to support its approval and also underestimated and ignored risks posed by the herbicide.

On June 8, the EPA issued a cancellation order for the herbicide, versions of which are made by Bayer, BASF and Corteva, but allowed continued application through July 31. In the ruling on behalf of the three-judge panel, Judge William Fletcher wrote that the court’s decision was difficult for farmers, who have already planted this year’s crop thinking the herbicide would be available. About two-third of U.S. soybean crops and more than half of cotton crops are dicamba-tolerant.

Earlier this month, farming and conservation organizations – the National Family Farm Coalition, Center for Food Safety, Center for Biological Diversity and Pesticide Action Network – argued the ruling should have immediately banned all use of dicamba and asked the court to hold the EPA in contempt. The groups, which filed the lawsuit that led to the court’s ruling, have until Thursday to file a reply brief. The Ninth Circuit panel will then make a decision.

“EPA and the pesticide companies have tried to confuse the issue and try to intimidate the Court,” said George Kimbrell, legal director for the Center for Food Safety in an emailed statement. “The Court held the product uses unlawful and EPA’s manipulations cannot change that.”

Dicamba, which has been sprayed since the 1960s, has skyrocketed in use in recent years, after Monsanto introduced new genetically modified soybean and cotton seeds that could withstand being sprayed by the herbicide. The seeds were designed to replace Monsanto’s Roundup-Ready crops, as many weeds had started developing resistance to glyphosate, which is the active ingredient in Roundup.

Since the 2017 growing season, thousands of farmers have filed complaints about crop damage caused by dicamba, and Bayer, which bought Monsanto in 2018, faces hundreds of lawsuits over the herbicide. Earlier this year, a federal jury ruled Bayer and BASF, which makes a version of the herbicide, must pay a Missouri peach farmer $265 million for damage incurred on his farm.

The EPA’s decision could make it so farmers are not without the herbicide dicamba at any point. The two-year registration that was vacated by the Ninth Circuit was set to expire later this year, and Bayer has said it is working to get dicamba re-approved for the 2021 growing season.

In its filing June 12, BASF said that about 25 percent of the dicamba purchased for this growing season had not yet been sprayed when the Ninth Circuit vacated the registration, and most of the herbicide would be sprayed within the next 30 days. Each day that goes by, more dicamba is sprayed.

Still, as the court battle continues, large investments made by Bayer, which bought Monsanto in 2018 for $63 billion, and BASF remain uncertain.

On a Tuesday, Bayer announced it canceled a $1 billion investment in a new facility to produce dicamba in Luling, Louisiana. The company said the decision is unrelated to the court’s ruling and is instead because of a global overcapacity of dicamba.

In a court filing June 12, BASF said, if dicamba is banned, it would have to shut down its own dicamba production facility in Beaumont, Texas. In the five years leading up to the launch of Engenia, BASF’s version of dicamba, the company said, it spent $370 million improving the facility.

BASF and Corteva, an agribusiness company owned by DowDupont, filed motions on Friday seeking to intervene in the case, after the court vacated the registrations of their dicamba herbicides. Bayer was already involved in the case.

In the filing on Tuesday, lawyers for the EPA argued that spraying a pesticide that is not registered is not illegal; instead, it is only illegal to buy or sell an unregistered pesticide. The cancellation order makes using the herbicide illegal, but only after July 31. The EPA also said it anticipated illegal applications of dicamba could be a problem if the herbicide is immediately banned.

“When a registration is vacated, misuse of that product is no longer a violation of FIFRA,” the filing said. “The Cancellation Order addresses this indirect and potentially disruptive environmental harm. The Order plugs a regulatory gap by ensuring that existing stocks of these newly-unregistered pesticides are used safely and appropriately, and only for a limited period of time.”

The EPA also argued that the Ninth Circuit does not have jurisdiction over the decision because it is a separate administrative order than the registration that was vacated.

Lawyers for Bayer, intervening on behalf of the EPA, also said that the agency made the decision by balancing the damage of continued use of the herbicide through the summer versus the harm to farmers who have already planted dicamba-tolerant soybeans and have weeds that could cost farmers billions in losses.

Rural America is more vulnerable to COVID-19 than cities