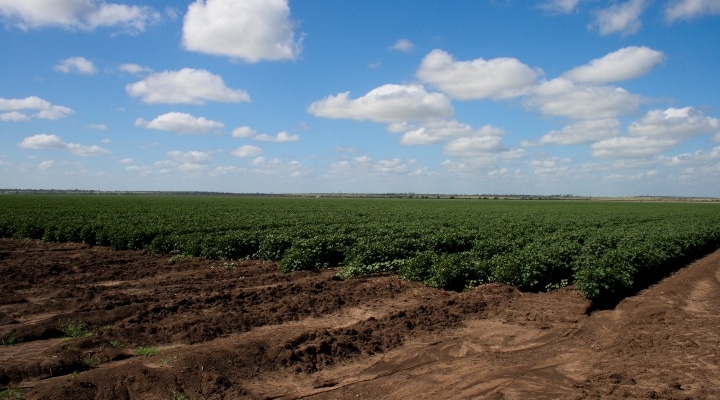 The U.S. Environmental Protection Agency (EPA) has approved new five-year registrations for two dicamba products and extended the registration of an additional dicamba product for use on dicamba-tolerant cotton and soybeans in a decision estimated to save growers and producers of the products millions of dollars in lost revenue. (photo by Otto_G, Creative Commons/flickr.com)

ATHENS, Ga. — The U.S. Environmental Protection Agency (EPA) has approved new five-year registrations for two dicamba products and extended the registration of an additional dicamba product for use on dicamba-tolerant cotton and soybeans in a decision estimated to save growers and producers of the products millions of dollars in lost revenue.

All three registrations include new control measures to ensure these products can be used effectively while protecting the environment, including non-target plants, animals and other crops not tolerant to dicamba.

Stanley Culpepper, a professor of crop and soil sciences and Cooperative Extension specialist in the University of Georgia’s College of Agricultural and Environmental Sciences, said that Extension personnel surveyed Georgia farmers at spring Extension meetings and 90% of growers responded that dicamba technology is important to their farming operations.

“The benefit of this technology was primarily for the control of Palmer amaranth, which is Georgia’s most troublesome pest. Sharing science and information from Georgia with the U.S. EPA regarding our monumental effort to steward all pesticides has been our honor,” said Culpepper, who is also a member of the National Environmentally Sound Production Agriculture Laboratory (NESPAL) at the UGA-Tifton campus. “Every member of Georgia’s agricultural community should be proud of the cooperative effort in strategically improving on-target pesticide applications in ways that protect the consumer, the grower and their neighbors, and our environment.”

“Farmers now have the certainty they need to make plans for their 2021 growing season,” said EPA Administrator Andrew Wheeler. “After reviewing substantial amounts of new information, conducting scientific assessments based on the best available science and carefully considering input from stakeholders, we have reached a resolution that is good for our farmers and our environment.”

The specified dicamba-based products have come under fire for their potential to volatilize and drift onto other crops that are not tolerant of the herbicide, causing millions of dollars in agricultural losses since the formulations were released and sparking lawsuits against manufacturers.

The 2020 registration labels also provide new flexibility for growers and states. For example, there are opportunities for growers to reduce the downwind spray buffer for soybeans through the use of certain approved hooded sprayers as an alternative control method. The EPA also recognizes and supports the important authority Federal Insecticide, Fungicide and Rodenticide Act (FIFRA) section 24 gives states for issuing locally appropriate regulations for pesticide use. If a state wishes to expand the federal OTT uses of dicamba to better meet special local needs, the agency will work with them to support their goals.

This action was informed by input from state regulators, grower groups, academic researchers, pesticide manufacturers and others. The EPA reviewed substantial amounts of new information and completed Endangered Species Act effects determinations to evaluate risk on threatened wildlife within the action area.

Culpepper reported that pesticide drift complaints made to UGA Extension have dropped by 77% over the past five years, even while producers adopted dicamba- and 2,4-D-tolerant technologies across the state.

“It was truly an honor to have the U.S. EPA visit one of our top Georgia farming operations to announce the registration of several dicamba formulations that will help our growers in 2021 and beyond,” he said of the Oct. 27 announcement at Cromley Farm in Brooklet, Georgia. “Also, I cannot stress enough how diligently and tirelessly the outstanding scientists at the U.S. EPA worked evaluating an enormous amount of scientific data to support their findings.”

With this information and input, EPA has concluded that these registration actions meet FIFRA registration standards. EPA believes that these new analyses address the concerns expressed in regard to EPA’s 2018 dicamba registrations in the June 2020 U.S. Court of Appeals for the Ninth Circuit. Further, EPA concluded that with the control measures now required on labels, these actions either do not affect or are not likely to adversely affect endangered or threatened species.

To view the final registration of the dicamba products, visit docket EPA-HQ-OPP-2020-0492 at www.regulations.gov. Learn more about pesticide safety and licensing from UGA Extension at extension.uga.edu/pesticide-safety.

Today, there are limited cost-effective options to control herbicide-resistant weeds affecting these commodities. In 2018, approximately 41% of U.S. soybean acreage was planted with dicamba-tolerant (DT) seed and almost 70% of U.S. cotton acreage was planted with DT seed in 2019. Relative to alternative herbicide programs, postemergence dicamba may reduce weed control costs for some growers, possibly by as much as $10 per acre, or over 5% of net operating revenue, not accounting for all measures growers will have to take to control off-field movement of dicamba.

Following reports of damage resulting from the off-site movement of dicamba, the EPA amended the dicamba registration labels in 2017 and in 2018. In June 2020, the U.S. Court of Appeals for the Ninth Circuit vacated the registrations for three dicamba products: XtendiMax with VaporGrip Technology, Engenia Herbicide and DuPont FeXapan Herbicide. As a result of the court’s decision, the EPA issued cancellation orders outlining limited circumstances under which existing stocks of the three affected products could be distributed and used until July 31, 2020.

Weak U.S. dollar benefits some agriculture commodities, but not all
February 28, 2021