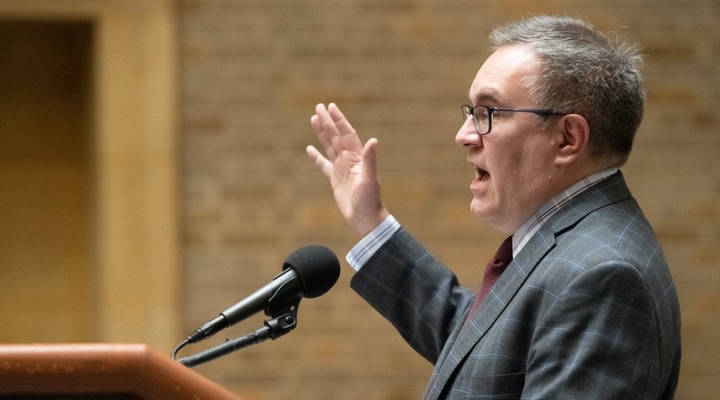 NIANGUA, Mo. — Recently at a roundtable in Niangua, Missouri with U.S. Representatives Vicky Hartzler (MO-04) and Jason Smith (MO-08) and farmers from the Missouri Farm Bureau and Missouri Corn Growers Association, U.S. Environmental Protection Agency (EPA) Administrator Andrew Wheeler highlighted efforts to provide certainty and predictability to the agricultural community. As part of the event, Administrator Wheeler announced the interim decisions for atrazine, propazine and simazine, which finalize measures to protect human health, mitigate potential ecological risks and continue to provide America’s farmers with the valuable tools they have come to rely on to control weeds in crops.

“Today’s decision is another example of the Trump Administration taking action in support of America’s farmers—one of our strongest allies in our mission to protect public health and the environment,” said EPA Administrator Andrew Wheeler. “The benefits of atrazine in agriculture are high, so these new protections give our nation’s farmers more clarity and certainty concerning proper use.”

“Year after year, our country’s farmers and ranchers continue to work and provide the food, fuel and fiber we rely on every day,” said EPA Region 7 Administrator Jim Gulliford. “EPA’s science-based process provides the clarity and certainty they need to safely and successfully implement critical pest management strategies while mitigating risk to human health and the environment.”

“I commend this Administration for being responsive to the needs of America’s farmers by ensuring they have access to an effective, affordable, and well-studied herbicide while also protecting human health and safeguarding our environment. Today’s decision will bring certainty and clarity which is needed for our growers as they plan for future growing seasons and will allow American consumers to continue to enjoy a safe, affordable food supply,” said U.S. Congresswoman Vicky Hartzler (MO-04).

“I want to thank Administrator Wheeler and the Trump Administration for their continued commitment to regulatory certainty for farmers. Atrazine is a trusted and effective tool for producers. This decision provides certainty for continued access to a critical herbicide. Time and again, this White House has proven itself a friend to Missouri farmers,” said U.S. Congressman Jason Smith (MO-08).

“EPA is using sound science to make decisions that protect children and workers, provide predictability and flexibility for our agricultural producers, and protect the environment,” said Missouri Department of Natural Resources Director Carol Comer. “These new measures allow farmers to be productive while following valuable guidelines that mitigate risks to human and aquatic life.”

“Agriculture is important to Arkansas’s economy, and we are pleased to join our state and federal partners for this announcement. These approvals are instrumental in furthering goals to advance environmental protection and solutions through commonsense measures,” said Arkansas Department of Energy & Environment Secretary Becky W. Keogh.

“We appreciate Administrator Wheeler’s decisive action on atrazine as well as renewable fuels and other regulatory matters of concern to farmers and ranchers. I’ve had the privilege of visiting two Missouri farms with him since he became head of the EPA,” said Missouri Farm Bureau President Blake Hurst. “Like President Trump, he’s listening to rural America, and we applaud his efforts.”

“Today’s news provides much needed regulatory certainty for farmers during a time when few things are certain,” said Missouri Corn Growers Association CEO Gary Marshall, who chairs the Triazine Network. “We appreciate today’s announcement from EPA Administrator Wheeler. We thank the agency on behalf of the farmers who rely on atrazine to fight problematic weeds and employ conservation tillage methods to reduce soil erosion and improve water and wildlife habitat.”

“I am very excited that the Trump Administration, more specifically the Environmental Protection Agency, has allowed southwest Missouri to be included in discussions affecting public policy and how these decisions may impact us locally. It is my honor to be among those welcoming EPA Administrator Andrew Wheeler to Niangua and more importantly, to have the opportunity to discuss issues which are of significance to all of us in the 54th District. It is so refreshing to have an administration which listens to the viewpoints of rural Missourians and strives to reduce regulatory burdens upon individuals and business rather than increase them,” said Missouri State Representative Hannah Kelly.

After a thorough review of the best available science and carefully considering scientific peer review and public comments, EPA has determined that certain mitigation measures are warranted for these three herbicides in order to address potential human health and ecological risk. Specifically, the agency is requiring the following mitigation measures:

Atrazine, propazine and simazine are widely used in the United States to control a variety of grasses and broadleaf weeds. Atrazine is an especially effective, affordable, and well-studied herbicide. Twelve meetings of the FIFRA Scientific Advisory Panel (SAP) were held to discuss various aspects of atrazine, including cancer and non-cancer effects, potential effects on amphibians, the aquatic plant community level of concern, and surface water monitoring methods. As the second most widely used herbicide in the United States, atrazine is used on about 75 million acres of agricultural crop land every year, including more than half of the Nation’s corn crops. Atrazine is also used on residential lawns and golf courses, particularly in the Southeast.

More information on atrazine and today’s interim decisions is available at: www.epa.gov/ingredients-used-pesticide-products/atrazine.

EPA completes interim registration review decisions to impose interim risk mitigation measures necessary to protect human health and the environment, while the agency conducts additional assessments, typically an endangered species assessment. For the triazines, EPA will next complete draft biological evaluations for atrazine, simazine, and propazine which are anticipated to be available for public comment in late Fall 2020. These evaluations are the first step in the interagency consultation process to protect listed species and their habitats under the Endangered Species Act. Final Endangered Species Determinations for each of the triazines are anticipated in 2021.

So nice he's doing it twice: Censky returning to soy