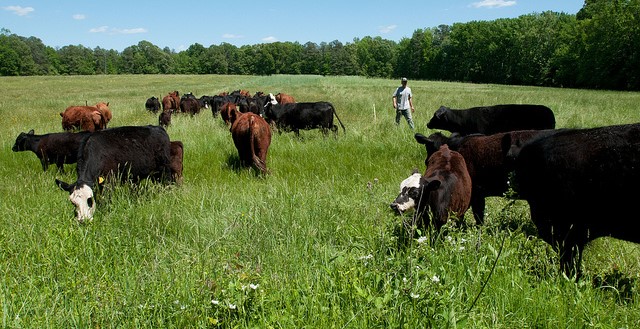 "Globally, beef production can be taxing on the environment, leading to high greenhouse gas emissions and land degradation," said Jason Rowntree, MSU associate professor of animal science, who led the study. "Our four-year study suggests that AMP grazing can potentially offset greenhouse gas emissions, and the finishing phase of beef production could be a net carbon sink, with carbon levels staying in the green rather than in the red." (U.S. Department of Agriculture, Public Domain)

EAST LANSING, Mich. — Three hundred years ago, enormous herds of bison, antelope and elk roamed North America, and the land was pristine and the water clean.

However, today when cattle congregate, they’re often cast as the poster animals for overgrazing, water pollution and an unsustainable industry. While some of the criticism is warranted, cattle production ¬- even allowing herds to roam through grasslands and orchards ¬- can be beneficial to the environment as well as sustainable.

“Globally, beef production can be taxing on the environment, leading to high greenhouse gas emissions and land degradation,” said Jason Rowntree, MSU associate professor of animal science, who led the study. “Our four-year study suggests that AMP grazing can potentially offset greenhouse gas emissions, and the finishing phase of beef production could be a net carbon sink, with carbon levels staying in the green rather than in the red.”

In addition to reviewing past studies, Rowntree’s team conducted new research at MSU’s Lake Station AgBioResearch Center. (The feedlot data were collected in East Lansing at the cattle property south of MSU’s main campus.) On any given day, the Lake City fields see a herd of more than 200 steers ambling through 600 acres of wavy grass.

The scientists tallied finishing phase stats, such as carcass weight, daily weight gain and more, and compared them to GHGs (methane, nitrous oxide and carbon dioxide) from digestion and fermentation, manure storage and handling and feed production and energy use on the farm. They also measured carbon losses arising from soil erosion.

Environmentally, AMP systems came out in the green, while feedlot emissions were in the red primarily because of feed-based nitrogen emissions from fertilizer. However, beef production is a complex equation, not one solely tied to environmental factors. For instance, the feedlot model was considerably more productive, producing the same amount of beef on only half the land.

This leaves more land for various purposes such as growing human food or rewilding. It is also important to note that the carbon sequestration changes over time and the researchers figure to see less over time. There is great potential that managed-grazing can offset the methane produced for many years to come, Rowntree said.

“AMP is not as productive as feedlots, based on yields, but the AMP grazing system produced considerably greater amounts of beef on a land basis as compared to continuous grazing, showing that improved management can increase the output of grass-fed beef,” he said. “Ultimately, in a closed system, this implies somewhat lower per capita beef consumption, but greater environmental benefits from what is consumed.”

Rowntree, who can talk hex hatches and fly-tying as easily as agriculture research, believes that beef production and blue-ribbon trout streams can co-exist harmoniously. Lake City is less than 50 miles from many of Michigan’s fabled streams, some of which are hailed as the best fishing spots in the Midwest. Rowntree’s research focuses on cattle but remains respectful of its impact on waterways and other natural surroundings.

“I grew up on the Gulf Coast of Texas and I’ve seen the damage firsthand that nitrogen leaching, sedimentation and run-off can cause to fisheries,” Rowntree said. “We’re not advocating for one approach over another, but rather we looked at different cattle production methods, and we see best practices and areas of improvement that support environmental stewardship in grass- and grain-fed systems.”

In that vein, feedlot operations could be more environmentally friendly if they used less fertilizers and cover crops in the grain production component for their feed. Using AMP grazing, land managers can allow cattle to graze an area with relatively high density, like wild migrating herds, but then allow for adequate plant recovery. This allows for a deeper, healthier root system and builds organic matter in the soil, which acts as a sponge for available moisture.

Rowntree is fond of saying, “However you need to get there, get there.” Seeing the Lake City herd graze in the bucolic setting and listening to Rowntree’s presentation, replete with Texas drawl, it seems like it’s quite possible to achieve that sweet spot of sustainable yet optimal production.