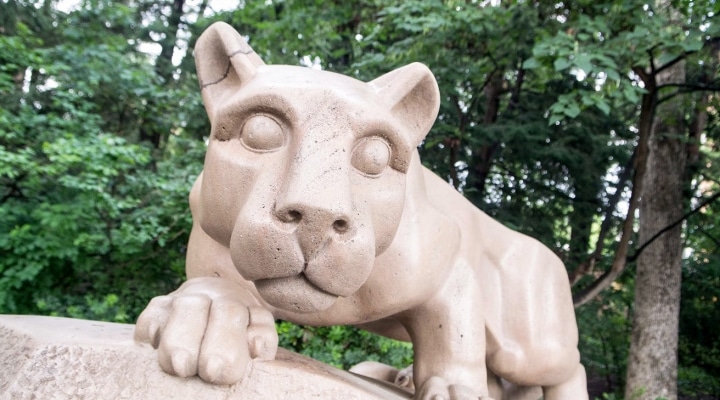 Penn State’s Environment Resource Management program — referred to as ERM — was established in 1971 to meet the demand for people with the scientific and leadership skills needed to address the enormous environmental challenges that had become so apparent in the 1960s, according to Robert Shannon, who is the program’s current coordinator. (photo by Penn State, creative commons/flickr.com)

“I was inspired by Earth Day events and wanted to make a difference via a multidisciplinary environmental career,” said Kober, who, as a youth, spent summers at Pymatuning Lake in northwestern Pennsylvania. “On the advice of my academic adviser, later that year I switched my major and was among the first students in the brand-new Environmental Resource Management program at Penn State.”

After graduating from the College of Agricultural Sciences in 1973, he embarked on a long career in environmental program leadership positions in the Pennsylvania Department of Transportation.

“I am extremely proud of and grateful for the opportunity to be prepared by Penn State to be among the first multidisciplinary environmental professionals in Pennsylvania and the U.S.,” said Kober, of Dillsburg. “The program’s graduates are among the pioneers in the implementation of the National Environmental Policy Act and the President’s Council on Environmental Quality.”

Penn State’s Environment Resource Management program — referred to as ERM — was established in 1971 to meet the demand for people with the scientific and leadership skills needed to address the enormous environmental challenges that had become so apparent in the 1960s, according to Robert Shannon, who is the program’s current coordinator.

“The program was a significant innovation within the college, and it was among the first of many environmental programs initiated at that time,” said Shannon, associate professor of agricultural and biological engineering. “The faculty and administrators responsible for establishing the ERM program had the foresight to predict a growing market both in the public and private sectors for graduates trained broadly and deeply in the environmental sciences and related disciplines.”

Shannon added that those visionaries also recognized that environmental problems and issues crossed over traditional disciplinary boundaries, so they developed the program as an interdepartmental, multidisciplinary major. The program was successful immediately, with the number of graduates increasing from 23 in 1973 to 104 by 1980. The program now boasts 3,000 graduates.

One of those graduates is Dennis Zabaglo, the aquatic resources program manager and principal environmental specialist for the Tahoe Regional Planning Agency in Lake Tahoe, Nevada. He also serves on a federal advisory committee on aquatic invasive species.

The 1994 alumnus grew up camping, hiking and fishing with his father, also a Penn State alumnus. While those experiences helped him to develop a respect for natural resources, it was a television special on climate change that proved transformative. “The show was hosted by Carl Sagan, who is one of my heroes,” Zabaglo said. “That’s when I knew I wanted to focus my career on protecting the environment.”

That goal led the Pittsburgh native to Penn State and the ERM major. “The program enabled me to understand myriad environmental issues along with ensuring I became well rounded in disciplines outside of natural resources,” he said.

The course that influenced him the most focused on environmental problem-solving. “The required text was ‘Consider a Spherical Cow,’ which I have on my bookcase to this day,” Zabaglo said. “The course opened my mind to a new way of thinking and allowed me to search for solutions outside the box.”

Like Kober and Zabaglo, Melissa May, a 2008 graduate, has had a lifelong fascination with nature. “As a kid, I collected feathers, rocks, shells — and probably to my parents’ horror — cool bugs,” said May, who, as a high school student, helped to restore a stream in her hometown of Pittsburgh.

She found her environmental niche after meeting a watershed specialist in an ERM class. “It clicked for me at that moment,” May said. “I decided to focus on watershed management, where the human side of water resources intersected with various scientific disciplines.”

Consequently, the Schreyer Honors College student complemented her primary degree with minors in geography and in watersheds and water resources and conducted undergraduate research on stream pollution. The experience led her to pursue a master’s degree in wildlife and fisheries science.

May is district manager of the San Juan Soil and Water Conservation District in Aztec, New Mexico. The agency was named the 2020 Outstanding District of the Year by the state of New Mexico. “I believe my education at Penn State has fed our district’s success in planning projects and securing funding,” she said.

ERM alumni and students are invited to participate in ERM alumni events in 2021, the first of which is scheduled for 7 p.m., April 20. The “ERM Virtual Game Night” will feature introductions by ERM advisers, a brief history overview by program leadership, and trivia about the ERM program led by current students in the ERM Society.