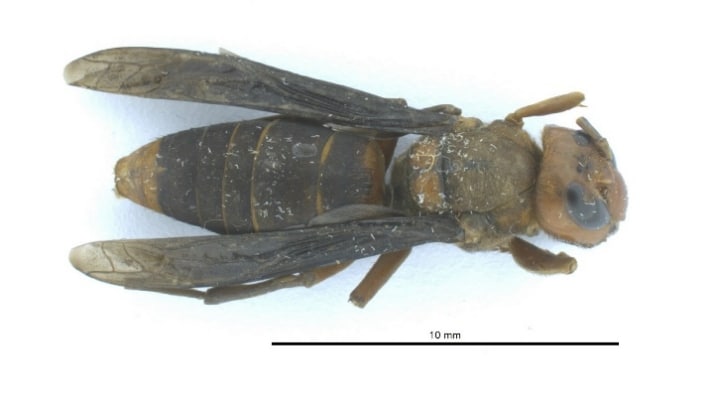 A resident found a deceased hornet near Marysville and submitted the report the evening of Friday, June 4 on WSDA’s online Hornet Watch Report Form. Entomologists contacted them on Monday, June 7. When WSDA retrieved the hornet on June 8, the specimen was very dried out and they observed that it was a male hornet.

Being the first detection in Snohomish County and having different coloring than previously collected specimens in North America, the hornet was submitted to the USDA Animal and Plant Health Inspection Service (USDA APHIS) for final verification.

Given the time of year, that it was a male, and that the specimen was exceptionally dry, entomologists believe that the specimen is an old hornet from a previous season that wasn’t discovered until now. New males usually don’t emerge until at least July. There is no obvious pathway for how the hornet got to Marysville.

“The find is perplexing because it is too early for a male to emerge,” said Dr. Osama El-Lissy, Deputy Administrator for the U.S. Department of Agriculture’s (USDA) Plant Protection and Quarantine program. “Last year, the first males emerged in late July, which was earlier than expected. However, we will work with WSDA to survey the area to verify whether a population exists in Snohomish County. USDA will continue to provide technical expertise and monitor the situation in the state. USDA has already provided funding for survey and eradication activities as well as research into lures and population genetics.”

“We’ll now be setting traps in the area and encouraging citizen scientists to trap in Snohomish and King counties. None of this would have happened without an alert resident taking the time to snap a photo and submit a report.”

NMPF: We won’t stay in a world without cows