Home » Endangered pollinators: how you can help 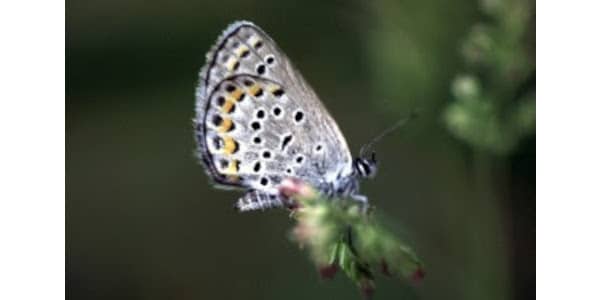 When we say "pollinator," the image of a honeybee probably pops into your head. But many other species are essential pollinators, too. (Courtesy of Michigan Department of Natural Resources)

LANSING — When we say “pollinator,” the image of a honeybee probably pops into your head. But many other species are essential pollinators, too. Plus, the honeybee is not a native bee! They were brought to America by European colonists in the 17th century. There are more than 450 species of native wild bee in Michigan and around 4,000 in the U.S. – so, while honeybees may be the face of the “save the bees” movement and our first idea of a “pollinator,” they’re not the only ones in trouble.

The rusty patched bumblebee, the first wild bee to be listed, in 2017, as endangered by the U.S. Fish and Wildlife Service, is of particular concern for conservationists. Bumblebees are a keystone species in most ecosystems, meaning that they are necessary for native wildflower reproduction, creating seeds and fruits that feed wildlife and pollinating many different crops. Because of their ability to “buzz pollinate,” these bees are very effective pollinators. They rely on hydrangea, locust trees, goldenrod, blueberry bushes, spotted Joe-pye weed and bee balm for food and shelter.

The yellow-banded bumble bee is a USFWS species of concern, and, while not listed as endangered, is relatively rare. They rely on goldenrod, which can be found in abundance in Michigan. Sometimes considered a weed, this plant provides much-needed nutrients to many different species. Instead of mowing over goldenrods or cutting them back, let them grow.

Epeoloides pilosulus, a kind of cuckoo bee – so named for laying their eggs in other species’ nest to offload rearing their young – which was once found throughout the northern and eastern U.S. and southern Canada, was believed extinct until a specimen was found in Nova Scotia in 2002. Michigan State University researchers found a single specimen in 2018, after a 74-year absence in the state. This species relies entirely on fringed loosestrife – a sprawling perennial with yellow flowers that is not related to the invasive purple loosestrife.

The Poweshiek skipperling and Karner blue butterfly are two endangered butterflies found in Michigan. The skipperling, a small orange, brown and cream butterfly, has declined rapidly in the past 50 years due to habitat loss. Once common on native prairies of the Great Plains and Upper Midwest, this species is thought to now be concentrated in only six populations on earth, two of which are in Michigan. It relies on the grass species prairie dropseed and mat muhly to lay its eggs and black-eyed Susan flowers for food.

The Karner blue butterfly is entirely dependent on the wild lupine. Because of habitat loss, it now only is found in remnant oak savannas. The thumbnail-sized butterfly lays its eggs on or near lupine plants, and its caterpillars feed only on lupine leaves and flowers. This butterfly benefits from DNR prescribed burns, which help wild lupine thrive.

All these rare pollinators would greatly benefit by passage of the Recovering America’s Wildlife Act.

There are many other endangered and rare pollinators in Michigan. All are important for our local ecosystems, and their decline has troubling consequences. Losing these species also means losing natural biodiversity and disrupting local environments. Many of the factors driving their decline are human-caused, like intensive farming, climate change, pesticide use and habitat loss.

So, how can you help these important, endangered or rare species? Get involved. Community science is one of the best ways to help revitalize these populations.